Today is the birthday of Homer J. Simpson (May 12, 1956- ). At least that’s the agreed upon date, which comes from episode 16 in Season 4, entitled “Duffless,” which originally aired February 18, 1993. In the episode, Homer loses his driver’s license when he gets a DUI and there’s a scene where his license is voided by a judge. Eagle-eyed fans were able to freeze the frame and see that his date of birth listed on the identification card was May 12, 1956. 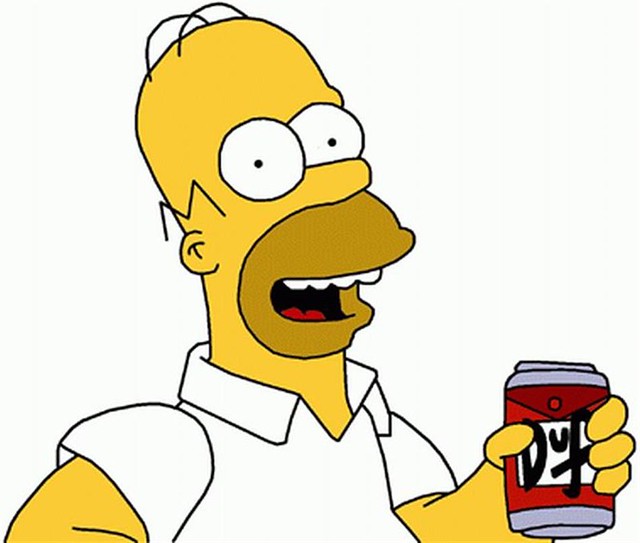 Here’s one biography of Homer, this one from the IMDb:

Homer (b.May 12, 1956) was raised on a farm by his parents, Mona and Abraham Simpson. In the mid-1960s, while Homer was between nine and twelve years old, Mona went into hiding following a run-in with the law. Homer attended Springfield High School and fell in love with Marge Bouvier in 1974. Marge became pregnant with Bart in 1979, while Homer was working at a miniature golf course. The two were wed in a small wedding chapel across the state line, From there they spent their wedding reception alone at a truck stop, and the remainder of their wedding night at Marge’s parents’ house. After failing to get a job at the Springfield Nuclear Power Plant, Homer left Marge to find a job by which he could support his family. He briefly worked at a taco restaurant called the Gulp n’ Blow, until Marge found him and convinced him to return. As a result, Homer confronted Mr. Burns and secured a job at the Plant. Marge became pregnant with Lisa in 1981, shortly before the new couple bought their first house. In 1985 and 1986, Homer saw brief success as the lead singer and songwriter for the barbershop quartet the Be Sharps, even winning a Grammy. During his time with the group, Homer was frequently absent from home, which put stress on his marriage. After the group broke up due to creative differences, Homer went back to Springfield to continue his old life. Sometime in the late 1980s, Homer and Marge carefully budgeted so Homer could have his dream job as a pin monkey in a bowling alley. Unfortunately for Homer, Marge became pregnant with Maggie shortly after he started his new job, and not being able to support his family, he went back to the Nuclear Plant. He likes martini.

Homer’s age was initially 34, but as the writers aged, they found that he seemed a bit older too, so they changed his age to 38; this is contradicted by The Homer Book which states Homer is currently 36. Homer reunites with his mother.Homer’s personality is one of frequent stupidity, laziness, and explosive anger. He suffers from a short attention span which complements his short-lived passion for hobbies, enterprises and various causes. Homer is prone to emotional outbursts; he is very envious of his neighbors, the Flanders family, and is easily enraged by Bart and strangles him frequently. He shows no compunction about this, and does not attempt to hide his actions from people outside the family, even showing disregard for his son’s well being in other ways, such as leaving Bart alone at a port. While Homer’s thoughtless antics often upset his family, he has also performed acts that reveal him to be a surprisingly caring father and husband: in “Lisa the Beauty Queen”, selling his cherished ride on the Duff blimp and using the money to enter Lisa in a beauty pageant so she could feel better about herself; in “Rosebud”, giving up his chance at wealth to allow Maggie to keep a cherished teddy bear; in “Radio Bart”, spearheading an attempt to dig Bart out after he had fallen down a well, even though Homer generally hates doing physical labor; and in “A Milhouse Divided”, arranging a surprise second wedding with Marge to make up for their lousy first ceremony, even going so far as to hire one of The Doobie Brothers as part of the wedding band and getting a divorce from Marge, essentially making their second wedding a “real” one.

Homer frequently steals things from his neighbor, Ned Flanders, including TV trays, power tools, air conditioners, and at one point, part of his house. Flanders knows about this, but Homer constantly states that he has “borrowed” the stolen items. He has also stolen golf balls from the local driving range, cable television, office supplies (including computers) from work, and beer mugs from Moe’s Tavern. Also, while ‘working the night shift’ with the rest of the employees at a local discount store (which was just them being locked in at night and forced to stay via electrocution chip) he made off with a number of Plasma Screen TVs on a forklift, while at the same time breaking out of the store.

Homer has a vacuous mind, but he is still able to retain a great amount of knowledge about specific subjects. He shows short bursts of astonishing insight, memory, creativity and fluency with many languages. Homer is also extremely confident; no matter how little skill or knowledge he has about anything he tries to do, he has no doubt that he will be successful. However, his brief periods of intelligence are overshadowed by much longer and more consistent periods of ignorance, forgetfulness and stupidity. Homer has a low IQ due to his hereditary “Simpson Gene,” his alcohol problem, exposure to radioactive waste, repetitive cranial trauma, and a crayon lodged in the frontal lobe of his brain. Homer’s intelligence was said to jump fifty points when he had the crayon removed, bringing him to an IQ of 105, slightly above that of an average person, however he had the crayon reinserted, presumably lowering his IQ back to its original 55. The amount of Homer’s brain which still functions is also questionable. At one point in the series, Homer apparently lost 5% of his brain after a coma.

Homer’s attitudes toward women, romance, and sex are occasionally explored. While Homer’s marriage with Marge is occasionally strained, it seems generally happy and faithful. Despite this, Homer usually shows no qualms with gawking at (and drooling over) attractive women. Homer successfully avoided an affair with Mindy Simmons, but has made the occasional remark denoting his attraction to other women (including the gag about coveting his neighbor’s wife), even in front of Marge. 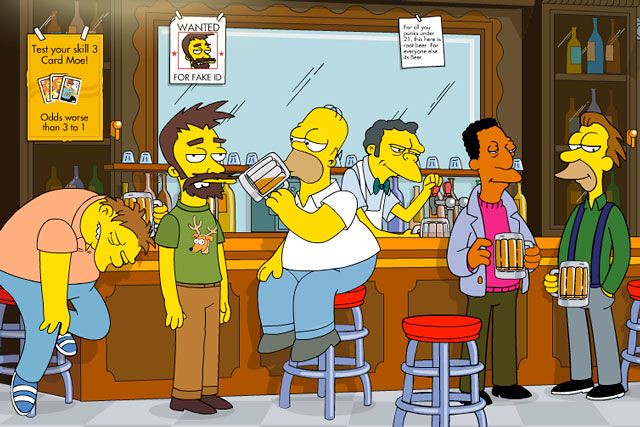 So while Homer doesn’t brew beer, he does certainly drink a lot of it. And without him, the world may not have ever heard of Duff Beer. And even though there are a few real world examples of Duff being brewed, I don’t recommend them, at least not the ones I’ve tried. But do drink a toast to Springfield’s favorite beer drinker, Homer Simpsons. Below are a few of the times Homer’s mentioned beer throughout the show’s twenty-plus year run. 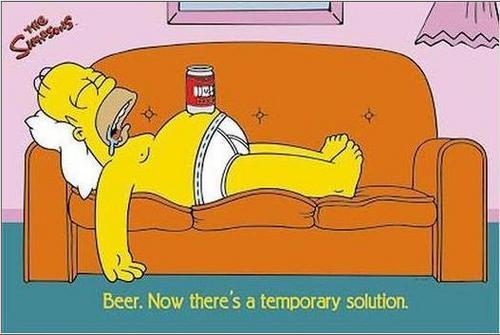 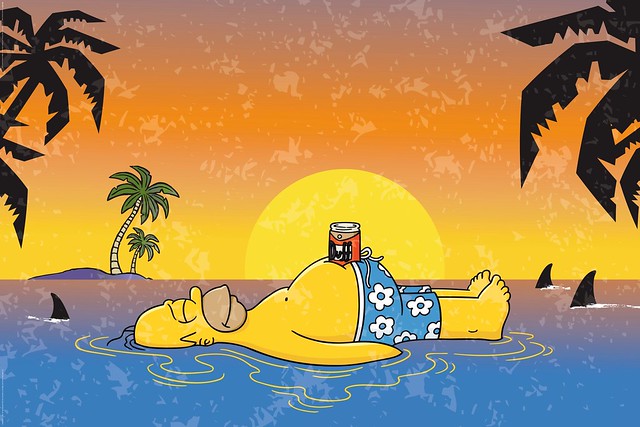 “Ah, good ol’ trustworthy beer. My love for you will never die.” 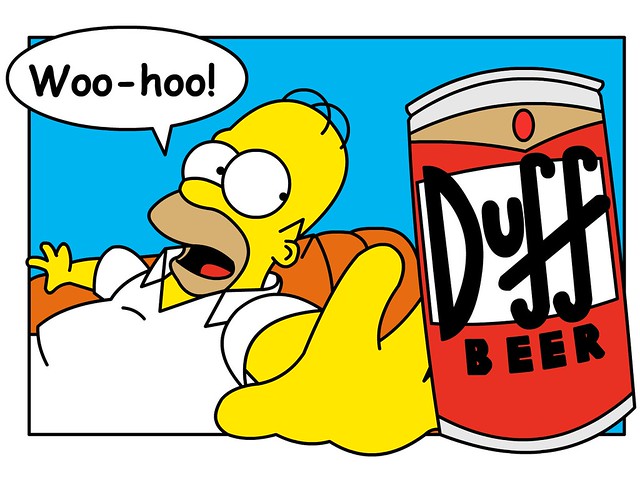 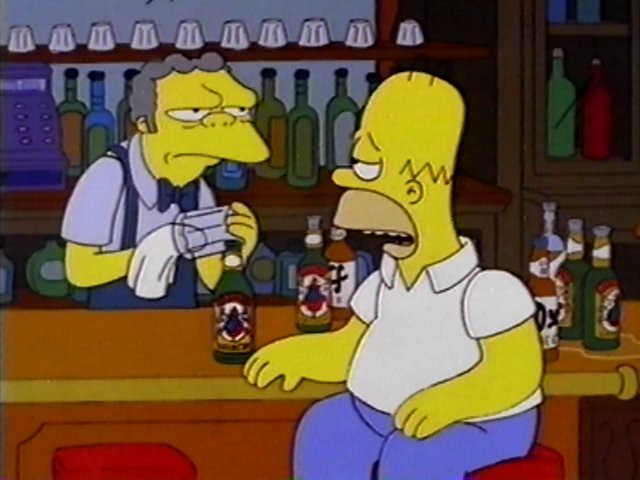 “I would kill everyone in this room for a drop of sweet beer.”

“Ah beer, my one weakness. My Achilles heel if you will.” 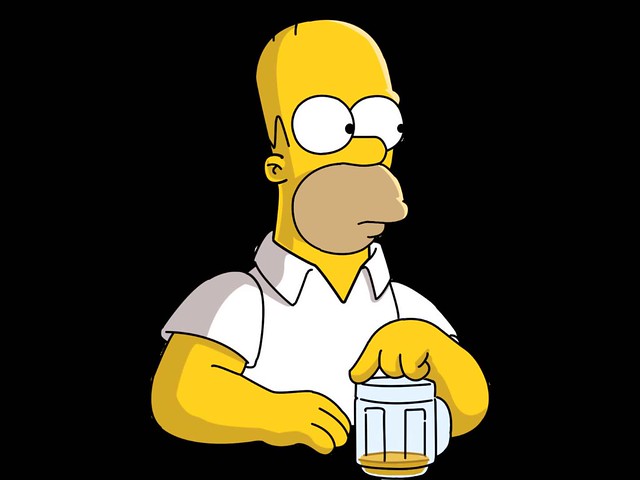 “Alright Brain, you don’t like me, and I don’t like you. But lets just get me through this, and I can get back to killing you with beer.” 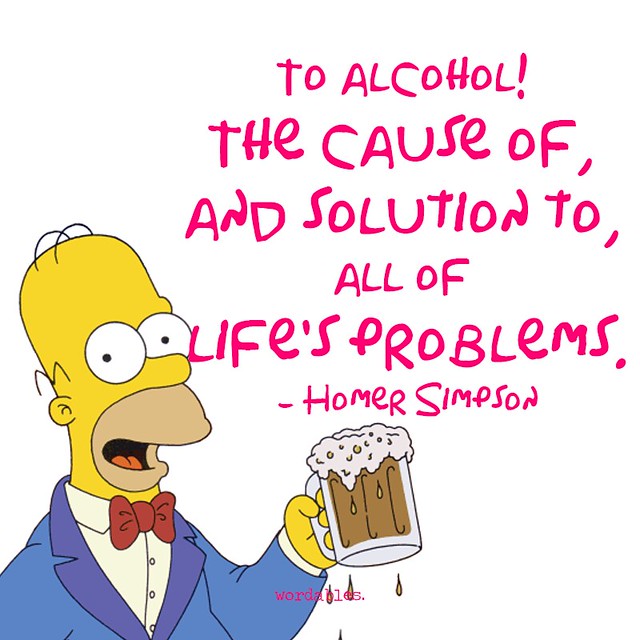 “To alcohol! The cause of, and solution to, all of life’s problems.” 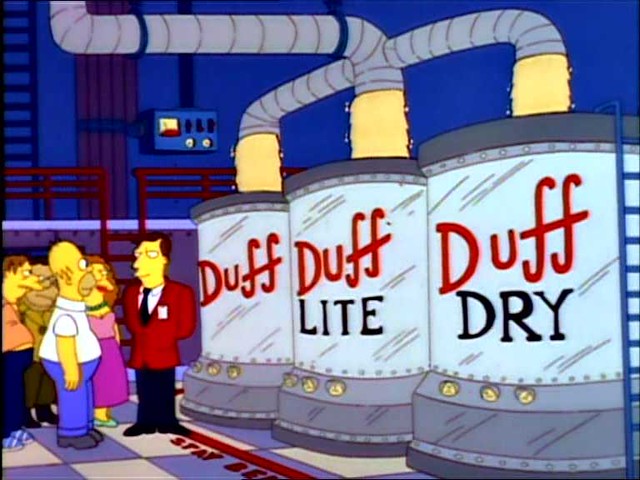 Homer: “Will there be beer?”

Movementarian: “Beer is not allowed.”

Movementarian: “Would you rather have beer or complete and utter contentment?”

Homer: “What kind of beer?” 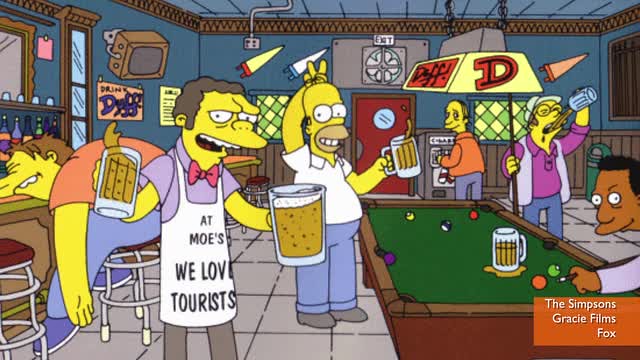 “I’m glad I’m back. Because the moment that sweet, sweet beer hit my tongue, I was born again!” 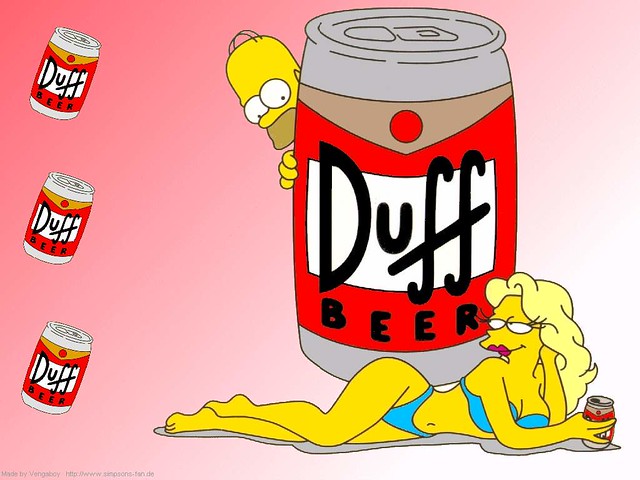 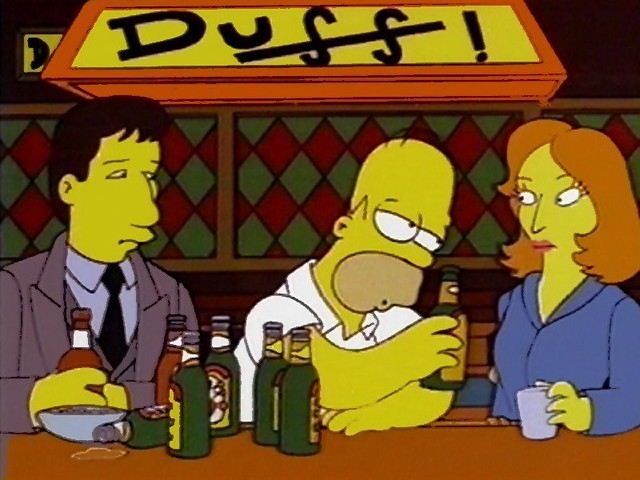 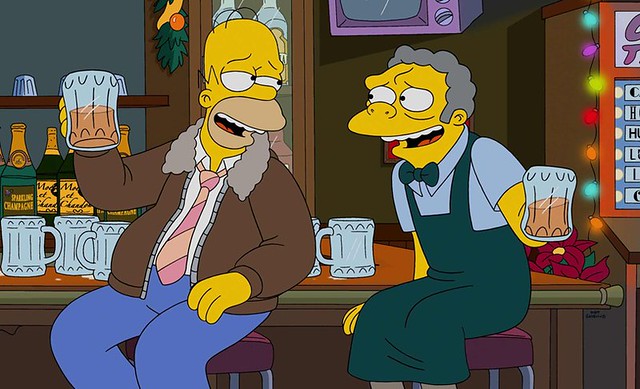 Therapist: “And has there been any improvement in Homer’s drinking?”

Marge: “Well, he’s down to two beers in the shower.”