Today is the birthday of Josef Groll (August 21, 1813-November 22, 1887). He was born in Vilshofen an der Donau, Germany. Many consider the Bavarian brewer to be the inventor of pilsener beer. 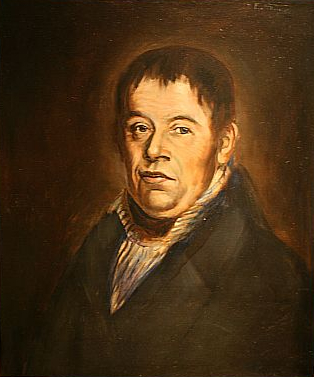 The citizens of Pilsen were no longer satisfied with their top-fermented Oberhefenbier. They publicly emptied several casks of beer in order to draw attention to its low quality and short storage life. It was decided to build a new brewery capable of producing a bottom-fermented beer with a longer storage life. At the time, this was termed a Bavarian beer, since bottom-fermentation first became popular in Bavaria and spread from there. The climate in Bohemia is similar to that in Bavaria and made it possible to store ice in winter and cool the fermentation tanks down to 4 to 9 degrees Celsius year-round, which is necessary for bottom-fermentation.

Bavarian beer had an excellent reputation, and Bavarian brewers were considered the masters of their trade. Thus, the citizens of Pilsen not only built a new brewery, but also hired Josef Groll, a Bavarian brewer. Josef Groll’s father owned a brewery in Vilshofen in Lower Bavaria and had long experimented with new recipes for bottom-fermented beer. On October 5, 1842, Groll produced the first batch of Urquell beer, which was characterized by the use of soft Bohemian water, very pale malt, and Saaz hops It was first served in the public houses Zum Goldenen Anker, Zur weißen Rose and Hanes on 11 November 1842, and was very well received by the populace.

Josef Groll’s contract with the Bürgerliches Brauhaus (citizens’ brewery) in Pilsen expired on April 30, 1845 and was not renewed. Groll returned to Vilshofen and later inherited his father’s brewery. The Pilsen brewery was directed by Bavarian brewers for nearly sixty years until 1900. 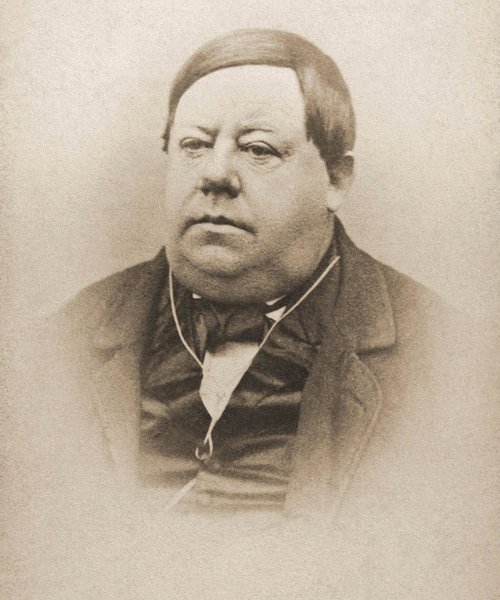 Here’s a description of Groll and his development of pilsner from the German Beer Institute:

The modern Pils may be a northern German brew, but it was a Bavarian brewmaster, Josef Groll, who started it all a scant 160 years ago, when he accepted a new job. Groll, who was born in 1813 in the Bavarian village of Vilshofen (some 100 miles northeast of Munich), prepared a new mash on October 5, 1842, at his new place of employment, the Burgher Brewery in the Bohemian city of Pilsen. As it turned out, the brew that Josef was mixing in the mash tun that day was truly revolutionary…it was the very first blond lager. It was a brew that was to set the style for an entirely new line of beers. The beer that resulted from that first brew was first served on November 11, 1842…and it has conquered the entire world ever since.

Until Groll made his new beer, the standard drink in Pilsen was a top-fermented brew, an ale. But not all was well with the Pilsen ale, because on one occasion, the city council ordered that 36 casks of it be dumped in public. It had become all too frequent that the beers available to the good burghers of Pilsen had been unfit to drink. This caused them to stick their heads together and to hatch a drastic plan: They would invest in a new, state-of-the art brewery and contract a competent brewer to come up with a better beer. In the 1840s, that meant a brewery capable of making Bavarian-style bottom-fermented brews, that is, lagers. Because of the reputation of Bavarian beer, Bavarian brewmasters, too, were held in high regard. So the citizens of Pilsen not only built a Bavarian brewhouse for Bavarian beer, they even engaged a Bavarian brewer to rescue the Pilsner beer from oblivion.

The fellow they engaged for the job was the above-mentioned Josef Groll of Vilshofen. He was an intrepid brewer who clearly rose to the challenge. Instead of using the standard dark malts of his day, he kilned his malt to a very pale color — a technique that had only recently been perfected in Britain. Groll then made use of only the finest of local raw materials. He flavored the brew with plenty of hops from the Saaz region of Bohemia (today, Czech Saaz hops is considered one of the finest aroma hops money can buy) and, of course, brewed with the city’s extremely soft water. From these ingredients he made an extract, which he fermented with good Bavarian lager yeast — and a new beer was born. Nobody before Groll had ever made such an aromatic golden-blond, full-bodied lager.

When Joseph’s contract was up, on April 30, 1845, he went back home to his native Bavaria, but his new beer’s reputation spread quickly beyond the limits of Pilsen. If imitation is the sincerest form of flattery, Joseph Groll sure had cause to feel flattered. Initially, the designation Pilsner beer was just an appellation of origin — a beer made in the city of Pilsen. But soon the new brew was copied everywhere. The first imitators were in adjacent towns with similarly soft water and equal access to Saaz hops. This was the beginning of the Bohemian Pilsner style. But breweries across the border, in Germany, began also to be interested in the Bohemian phenomenon … they had to, because it started to eat into their own sales. This was the time in Europe, when the emerging railway network made the transportation of beer possible to just about any major city.

By the turn of the 19th century, it had become chic from Paris to Vienna and from Hamburg to Rome to drink the beer from Pilsen. The beer’s name had become a household word, usually in its abridged form of Pils. The term Pils had evolved from an appellation of origin to a designation for a new beer style, the very model of a modern lager beer. When Groll died in the village of his birth, in little Vilshofen, on October 22, 1887, he probably had no idea how profound a revolution he had brought about in the world of beer!

Groll’s beer was taking the continent by storm and was even making inroads in Munich, where brewers were starting to make their own variation on the Groll brew. The Burgher Brewery of Pilsen, however, where it had all started, was far from flattered by the imitations its beer had spawned. This brewery was far more interested in supplying the demand for Pilsner beer itself than having other breweries usurp what it considered its proprietary brand name. In 1898, therefore, the Burgher Brewery of Pilsen went to court in Munich. It sought an injunction against the Thomass Brewery, which had come out with a blonde lager, named “Thomass-Pilsner-Bier.” The verdict that the court handed down in April 1899, however, went against the plaintiff. The court argued that “Pilsner” was no longer an appellation, but had become a universal style designation. 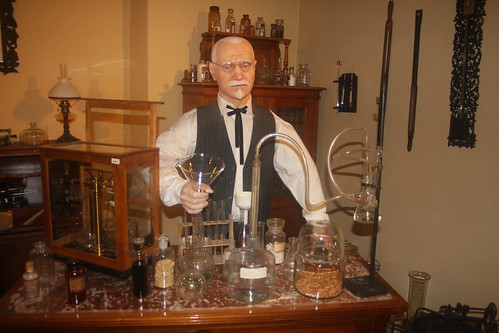 A diorama of Groll in his lab at the Pilsner Urquell Museum.

And this account is from Food Reference, but appears to have been written by Pilsner Urquell:

Most importantly, Martin Stelzer also discovered a brewmaster who would change the way that beer was brewed forever: a young Bavarian called Josef Groll.

Beer as we know it has always been produced using the same basic ingredients, hops, barley and water, and for thousands of years was brewed in open vats with fermentation occurring at the top of the brew.

Groll was able to look beyond what was possible and combine his knowledge of an innovative new bottom fermenting process, known as ‘lagering’, with his access to the finest local ingredients at Plzen: a special type of two-row fine-husk barley, the locally grown Saaz hops and of course the uniquely soft local water.

In 1842 Josef Groll’s vision became reality. He succeeded in making a beer the best it could be.

Josef Groll was an unlikely hero, so rude and bad-tempered he was described as the ‘coarsest man in the whole of Bavaria’ by his father.

But it is the fate of every genius to challenge those around him. Throughout history those who have made a step change in their fields, those who have had an idea of true originality, have had one thing in common, the ability to see beyond the ordinary, and create something extraordinary.

Sir Issac Newton observed an apple, and it changed how we see the world. A certain Mr Columbus discovered the New World by rejecting how everyone had seen the old one. And in 1842 Josef Groll created a beer that changed the way the world would see beer.

From the dawn of civilization, beer had been a dark, murky liquid. Then a protest by the citizens of Plzen, Bohemia, inspired the change that would influence the entire beer industry and set the standard for all lagers.

After furious citizens had dumped no less than 36 barrels of undrinkable sludge into the city’s gutters in 1838, it sparked off a remarkable chain of events – a new brewery building, an innovative new brewmaster and finally the world’s first golden beer.

On 4 October 1842 in St Martin’s market, Plzen, Josef Groll unveiled his new creation to widespread sensation, after all a golden beer had never been seen before.

News of this remarkable Plzen beer spread throughout Bohemia. The arrival of the railway and the beer’s popularity amongst German and French tourists soon meant that Plzen’s famous brew gained international appeal.

But with success inevitably came competition. Josef Groll’s original golden beer soon spawned many imitators, many of which also claimed to be Plzen or Pilsner beer, whether they came from Plzen or not. In fact, today Pilsner has become a generic term around the world for any bottom-fermented golden beer sold as ‘pils’ or ‘pilsner’.

In 1898, the brewery acted to protect itself against inferior competitors and the beer’s name was changed to Pilsner Urquell- a German phrase meaning literally “from the original source, Plzen”.

Some say the name was changed to satisfy consumer demand for the original golden beer. But as those who know their beer will tell you: you can tell the original Pilsner by its slightly darker shade of gold, and of course by its taste which is a world apart.

Beer Sweden also has a nice two-part account, as does Brewing Techniques and Food Reference. Pilsner Urquell’s Czech website also has a brief history and a timeline. Brewer K. Florian Klemp wrote Presenting Pilsners for All ABout Beer, which includes Groll’s story. 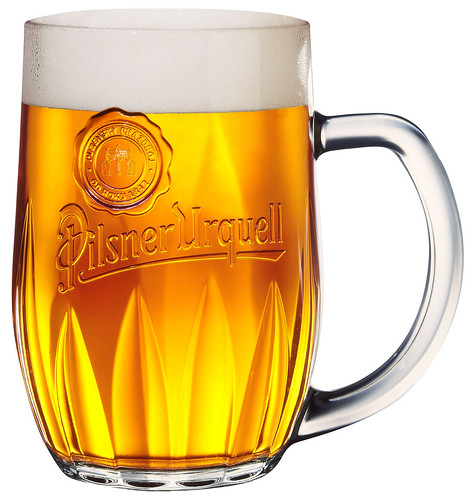