Today is the 38th birthday of Mark Dredge, who writes the beer blog Pencil and Spoon from his home in Kent, England. I’ve had the pleasure of drinking with Mark on a few of his trips across the pond. The first time, at the opening gala for SF Beer Week, and several years ago at the Beer Bloggers Conference in Boulder, Colorado, and more recently judging at GABF. By day, he works in digital marketing and social media, most recently for Pilsner Urquell, and by night, he’s “a beer writer and blogger.” The last two times I saw him, a few years ago in Belgium, and also in San Francisco, it was working for Pilsner Urquell. In December 2009, he won the British Guild of Beer Writers New Media Writer of the Year for Pencil and Spoon. If you don’t read his stuff, you should. Join me in wishing Mark a very happy birthday. 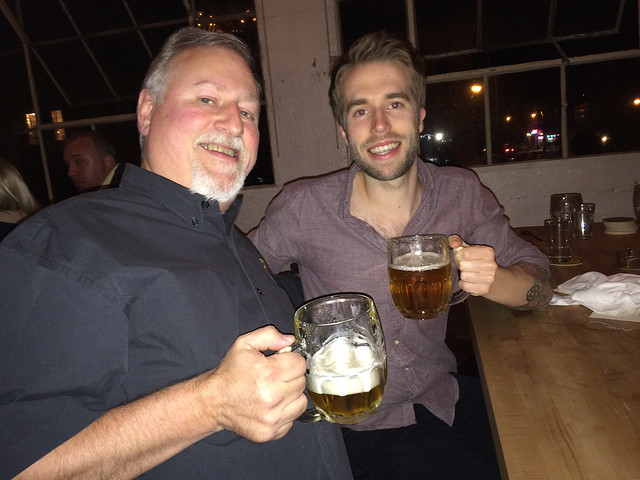 With Mark at Central Kitchen in San Francisco on the anniversary of the 1st tapping of Pilsner Urquell, November 9, 1842. Mark, at left, having lunch at Mountain Sun in Boulder, Colorado during the Beer Bloggers Conference a few years ago. Raising a toast. (Note: This last photo was purloined from Facebook.)