Sunday’s ad is for Budweiser, from 1914. The pre-prohibition ad is their attempt to sway people against supporting prohibition. The series used the tagline “Budweiser spells Temperance.” This one features the obscure (at least to me) Leipzig Monument, which was dedicated today, October 18, 1913, commemorating the “Battle of Nations,” also known as the Battle of Leipzig, which took place 100 years earlier in 1813. It was fought in Leipzig, in Saxony against Napoleon.

The coalition armies of Russia, Prussia, Austria, and Sweden, led by Tsar Alexander I of Russia and Karl Philipp, Prince of Schwarzenberg, decisively defeated the French army of Napoleon I, Emperor of the French. Napoleon’s army also contained Polish and Italian troops, as well as Germans from the Confederation of the Rhine. The battle was the culmination of the 1813 German campaign and involved nearly 600,000 soldiers, making it the largest battle in Europe prior to World War I.

Being decisively defeated for the first time in battle, Napoleon was compelled to return to France while the Coalition hurried to keep their momentum, invading France early the next year. Napoleon was forced to abdicate and was exiled to Elba in May 1814.

Proposals to build a monument commemorating the battle began a year after the battle took place, in 1814, and an architect, Friedrich Weinbrenner, designed a version of the monument that was never used. Fifty years later, a foundation stone was placed at the site, but no memorial was built. It would be another 50 years before it was finally completed, financed primarily by the city of Leipzig, it was dedicated in 1913, on October 18, for the 100th anniversary of the battle, at a cost of 6 million Goldmark ($3,484,966 U.S.).

The monument commemorates Napoleon’s defeat at Leipzig, a crucial step towards the end of hostilities in the War of the Sixth Coalition, which was seen[by whom?] as a victory for the German people, although Germany as we know it did not begin to exist until 1870. There were German speakers fighting on both sides, as Napoleon’s troops also included conscripted Germans from the French-occupied left bank of the Rhine as well as from the Confederation of the Rhine.

The structure is 91 metres (299 ft) tall. It contains over 500 steps to a viewing platform at the top, from which there are spectacular views across the city and environs. The structure makes extensive use of concrete, although the facings are of granite. The monument is widely regarded as one of the best examples of Wilhelmine architecture. It is said to stand on the spot of some of the bloodiest fighting, from where Napoleon ordered the retreat of his army.

So that was the monument that Anheuser-Busch decided would help sell their beer. 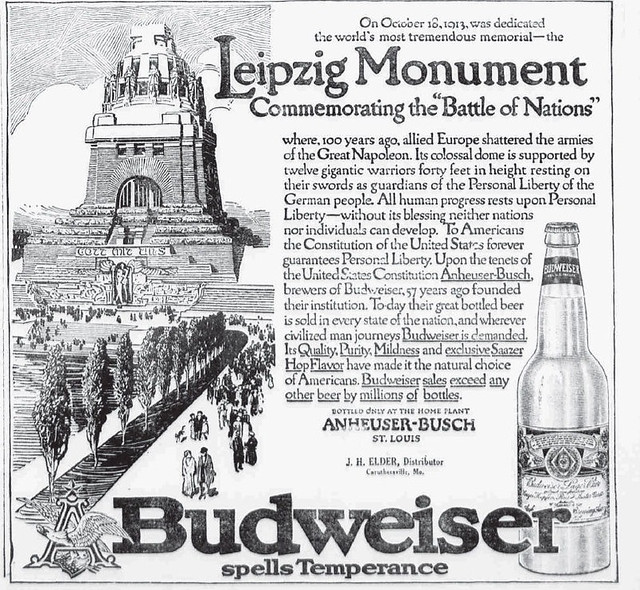