Sunday’s ad is for Heineken, from the 1970s. In the later 1970s, Heineken embarked on a series of ads with the tagline “Heineken Refreshes the Parts Other Beers Cannot Reach.” Many of the ads were in a sequential panel, or comic strip, format and they were intended to be humorous.

In this ad, a three-panel format, Spock from Star Trek must be under the weather, or at least in a bad mood. His ears are limp and drooping. In the second panel, he lifts a mug of beer to his lips and immediately his ears being to perk up. But after finishing his beer, Spock’s ears are standing tall, and even he thinks it’s “illogical.” 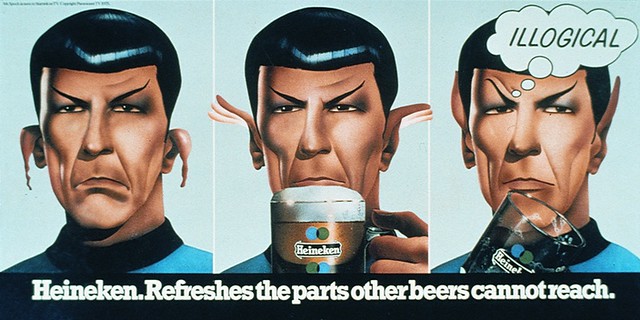