Vincent Van Gogh is justly famous for his later works, where he used bold swaths of color to create amazing paintings that (though not in his lifetime) shattered the art world. Paintings like Starry Night, Sunflowers and Wheat Field with Crows. Most of his most well-known works stem from the last few years of his life, which ended in July of 1890.

But before that, his work was darker, less colorful and he created three paintings with a mug or bottle of beer, between 1881-85, before he moved to Paris the following year and all hell broke loose, color-wise. The painting I like best of these is Beer Tankards, which was done between September and October of 1885 when Van Gogh was in Nuenen (in the northern part of The Netherlands). It’s currently one of the works at the Van Gogh Museum in Amsterdam. 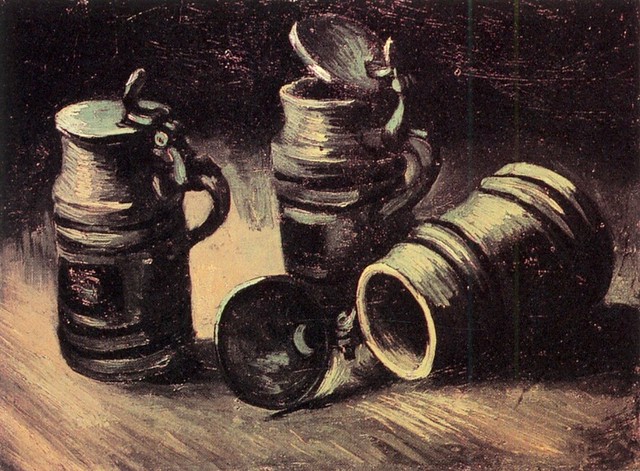 Beer Tankards was done a few months after his father passed away in March and these works were dark, such as The Potato Eaters, one of his first major works. Though it’s nearly monochromatic, I like the composition of it, the way he’s seemingly haphazardly strewn the three tankards on what presumably a wooden table. Their positioning is, of course, quite deliberate. 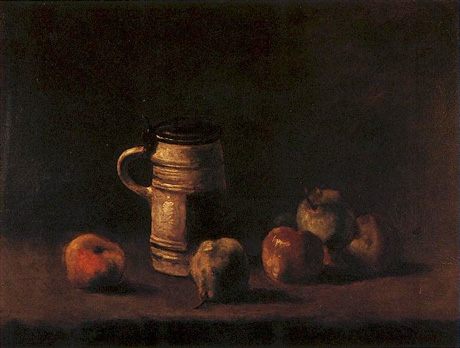 The first time Van Gogh used a beer mug with four years earlier, in 1881’s Still Life with Beer Mug and Fruit. During this time the artist depicted “only the meager and homely possessions of the very poor: their basic foodstuffs, their rough earthenware crockery and thick bottles of beer set out clumsily on plain tables against dark backgrounds.” That’s Naomi E. Maurer’s description in her book, The Pursuit of Spiritual Wisdom. 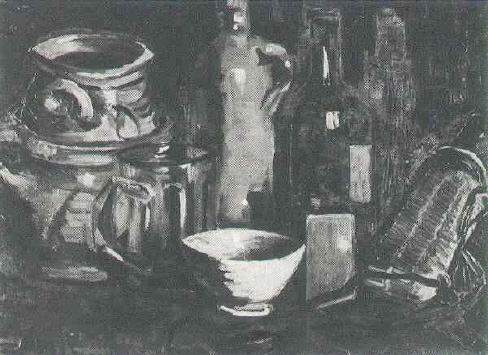 He revisited the same thing three years later, in 1884 (a year before Beer Tankards) when he painted Still Life with Pottery, Beer Glass and Bottle. This one’s probably the least known, and for me it’s easy to see why. It seems too crowded and composition suffers as a result. Also, it’s very rough, not just impressionistic but less polished or finished.

In the last year of his life, Van Gogh returned once more to painting drinking, though as Rick Lyke points out, he was copying “a woodblock print by Honore Daumier titled “Physiology of the Drinker, The Four Ages.” The painting depicts a youth and three men gathered around a table, tankards in hand, with a pitcher at the ready for refills.” The painting is at the Art Institute of Chicago. 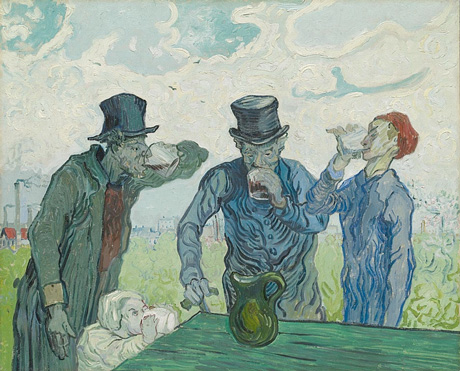 For more about Vincent Van Gogh, Wikipedia is a good place to start, though there’s even more at the Vincent Van Gogh Gallery. There are also tons of links at the ArtCyclopedia.