You are here: Home / Just For Fun / Buddy’s Beer Garden

On the eve of the repeal of prohibition, anticipation must have been running pretty high. On November 18, 1933, Warner Brothers cartoon studios released their newest Looney Tunes animated short film, “Buddy’s Beer Garden.”

“It is a Looney Tunes cartoon, featuring Buddy, the second star of the series. It was supervised by Earl Duvall, here credited as ‘Duval,’ was one of only five Warner Bros. cartoons directed by him, and one of only three Buddy shorts. Musical direction was by Norman Spencer.” 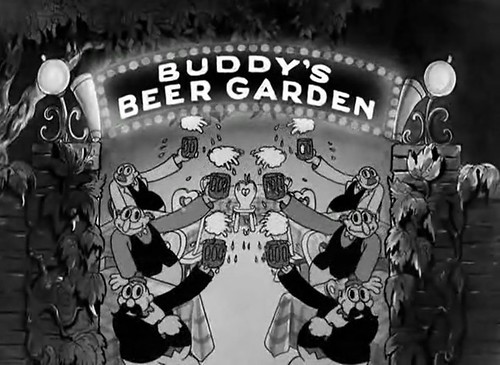 Here’s the description of the film from Wikipedia:

We enter Buddy’s beer garden, where are gathered many merry patrons, singing “Oh du lieber Augustin”, mugs in hand. The happy opening scene fades to one of an equally merry Buddy, who balances a tray and sings of the good cheer his beer brings (to the tune of “Auf Wiederseh’n (We’ll Meet Again)”), as he fixes a tablecloth and sets down two glasses of his ware, while a black dog, pretzels on its tail, behind him barks in tune. A German oom-pah band creates an ambience (and, as the band reappears four times throughout the cartoon, each time they are seen, as a gag, a small member of the group will come out of the largest member’s brass instrument, playing, in succession, a trumpet, maracas, a piano, and a bass drum.) Beer flows on tap, and Buddy ensures that each mug has plenty of foam. Cookie neatly prepares several pretzels, which then are salted by the same little dachshund, and carried thence away. The tongue sandwiches offered as part of the bar’s free lunch sing & lap up mustard; an impatient patron (presumably the same brute who serves as the villain in later shorts, such as Buddy’s Show Boat and Buddy’s Garage) demands his beer, which he instantly gulps down upon its arrival. 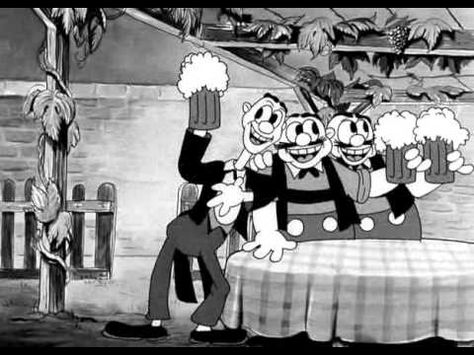 All present take part in “It’s Time to Sing ‘Sweet Adeline’ Again”: some sing, one patron plays his spaghetti as though the noodles were strings on a harp, Buddy makes an instrument out of his steins, &c. Cookie comes around, offering cigars and cigarettes to the patrons, one of whom, the same impatient brute as before, accepts, but not before freshly stroking the girl’s chin. Cookie performs an exotic dance for the entire beer garden, and is joined by the selfsame patron, & a formerly stationery piano. The film goes on: Buddy whistles “Hi Lee Hi Lo”, tossing beer from one mug to another, preparing sandwiches, clearing tables. 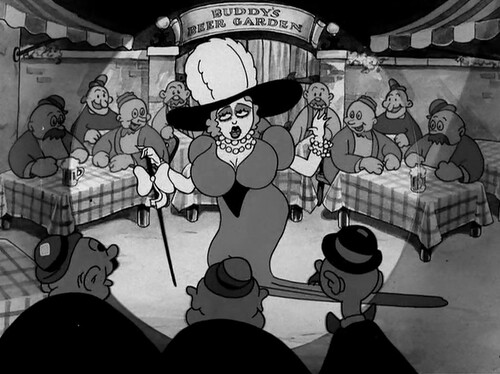 As a final treat for his customers, Our Hero introduces a lady singer (who bears a striking resemblance to Mae West), who reveals herself only after Buddy’s departure and a brief musical interlude. The grand dame attracts the attention of the very same recurring patron, who drunkenly stumbles over to her with the intention of receiving a kiss: as the song (“I Love my Big Time, Slow Time Baseball Man”) ends, he makes his request, but a horned goat, part of a poster advertising “Bock Beer”, but nonetheless quite alive, with its horns stabs the patron’s backside, sending him flying. The patron, on his airborne journey, causes the lady singer to catch her dress on an overhanging tree; the dress tears, & the throaty performer, now grounded, is revealed to be a cross-dressed Buddy. Pleasantly embarrassed, Buddy stalks away, waving blithely to all present; in the final shot, we see that the bird cage strapped to Buddy’s posterior (there to replicate the voluptuousness of his singing persona), in fact houses an exotic bird, which shows itself to have a voice & nose like those of Jimmy Durante, as well as a saying: “Am I mortified!” 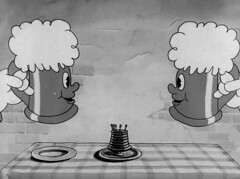