You are here: Home / Editorial / Camille Paglia’s Take On The Minimum Drinking Age

While I don’t often opine about America’s idiotic minimum drinking age, one of the oldest in the civilized world, I do believe it should be 18 for a variety of reasons. Author Camille Paglia, in the current issue of Time magazine, had a rather forceful, nicely angry piece on why she believes It’s Time to Let Teenagers Drink Again, which is the title in print. Online it’s called The Drinking Age Is Past Its Prime.

She’s pulling no punches, and believes it should be “repealed,” if indeed that’s even the right way to change it. She writes: “It is absurd and unjust that young Americans can vote, marry, enter contracts and serve in the military at 18 but cannot buy an alcoholic drink in a bar or restaurant. The age-21 rule sets the U.S. apart from all advanced Western nations and lumps it with small or repressive countries like Sri Lanka, Pakistan, Indonesia, Qatar, Oman and the United Arab Emirates.” I don’t necessarily agree with everything she has to say, but enough. Plus it’s great to see such an unabashed argument in favor of relaxing that particular law in so mainstream a media outlet.

But my favorite line is the way she characterizes alcohol’s positive attributes. “Alcohol relaxes, facilitates interaction, inspires ideas and promotes humor and hilarity.” She concludes.

Alcohol’s enhancement of direct face-to-face dialogue is precisely what is needed by today’s technologically agile generation, magically interconnected yet strangely isolated by social media. Clumsy hardcore sexting has sadly supplanted simple hanging out over a beer at a buzzing dive. By undermining the art of conversation, the age-21 law has also had a disastrous effect on our arts and letters, with their increasing dullness and mediocrity. This tyrannical infantilizing of young Americans must stop!

Here, here. Few things in society are better than the simple pleasure of sharing a beer with friends. I didn’t realize it was improving our nation’s “arts and letters,” but hey, I’ll go with it. 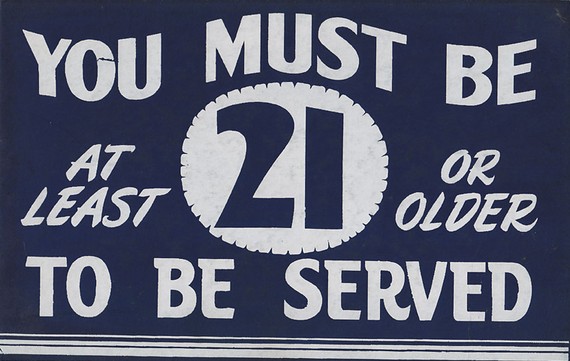