I know it’s a good thing when celebrities drink craft beer, because people tend to copy their behavior. So the more celeb’s drinking good beer, the more some people might pick it up, too. But I can’t help but find it a little sad, too. I just don’t find all the minutiae about famous people very interesting. It’s just not my thing, though I have friends and loved ones who feel otherwise, so I do tend to find out about these gossipy items anyway, sometimes whether I want to or not. Case in point, I just learned that actress Charlize Theron served Dogfish Head’s 60 Minute IPA at her house in Los Angeles during the Super Bowl. And that’s great, don’t get me wrong. Charlize Theron was, at one time, on my list of five (married men will know what I’m talking about here) so I’m certainly glad to know she has good taste in beer. 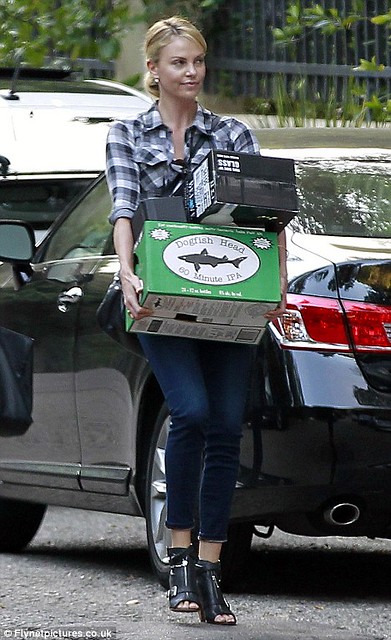 The whole thing was captured in nauseating detail in the U.S. Showbiz section of the UK’s Daily Mail in an article titled — believe it or not — We’re in for a Super night: Charlize Theron hardly breaks a sweat as she carries a case of beer to a Super Bowl party. They have five, count ’em five, photos of Theron carrying the beer from her car to the house. The running commentary is hilariously absurd, though I couldn’t help but hear it in my head as if being read by Robin Leach from Lifestyles of the Rich & Famous.

To be fair, I’ve posted a photo of television celebrity Nathan Fillion drinking a Drake’s IPA through a curly straw, that my wife took during an L.A. Browncoats convention a few years ago, but somehow that seems different. Or maybe I’m just fooling myself. What I really wanted to know from the article is why she chose that beer, and how she and her guests enjoyed it. Now that I’d find far more interesting than how she managed to carry it a few feet without breaking a sweat.