You probably saw the news last week that CraftWorks Restaurants and Breweries was closing the Original Gordon Biersch Brewpub in Palo Alto. It turns out that was only half of the story, the half from CraftWorks who was looking at an underperforming location with no sense of its history. Much more interesting is the other half of the story, in which a partnership will be re-opening the brewpub in February of 2016 under the name “DG’s GB,” for “Dan Gordon’s Gordon Biersch.” The group includes Gordon Biersch co-founder Dan Gordon, Oliver Gordon — Dan’s son — along with one of Gordon Biersch’s earliest employees from the very beginning (in fact employee #2 after Dan and Dean on the founding team) Steve Sinchek and his wife Lisa Sinchek. Sinchek also owns and operates two successful restaurants in the area, and they’ll be extensively renovating the 27-year old brewpub, licensing the GB name from CraftWorks. DG’s GB will be unique to the brewpub chain and the plan is to offer a one-of-a-kind experience in Palo Alto where it all began. 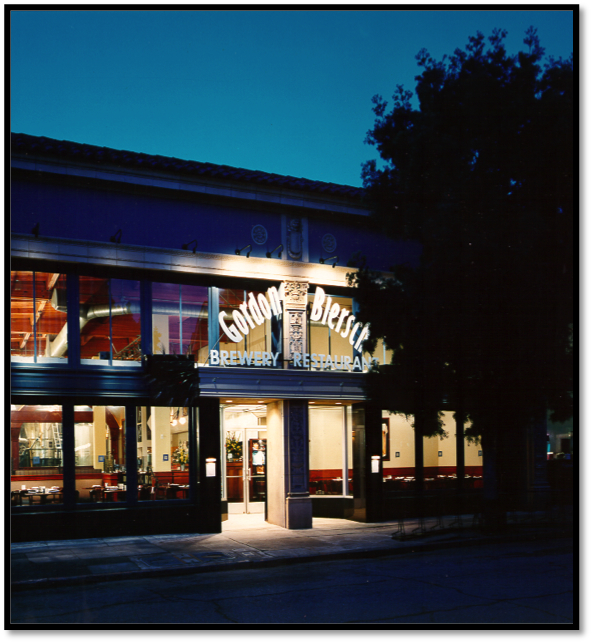 The Palo Alto Gordon Biersch brewpub when it opened in 1988.

Dan gave me a call at home yesterday during halftime to get me up to speed on the rest of the story, that while the Palo Alto Gordon Biersch is closed now, it won’t be forever, and the grand re-opening should be in just five months, give or take, from now. They’re basically going to gut the inside, installing a new bar on the left-hand wall of the inside, with hightop tables and communal dining. The new menu will be farm to table, with locally sourced ingredients wherever possible. There will still be Dan’s signature garlic fries, of course, but I’m more excited about a new menu item they’ll be introducing: fresh-baked Bavarian pretzels that will be made in a special oven outside. 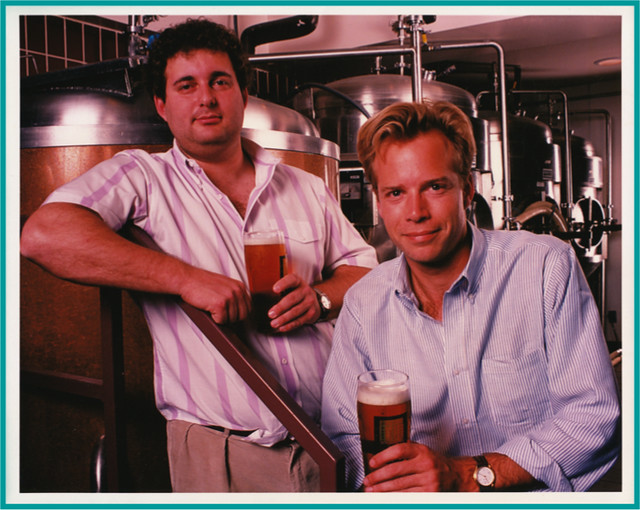 An early press shot of Dan and Dean taken at the San Jose brewpub circa 1990.

Brewer Tom Davis, who used to brew at Palo Alto in the early days, will use the smaller brewpub brewery as both a training brewery and for R&D, to create small batch experimental and seasonal beers that will be unique to DG’s GB. They’ll offer twelve beers, brewing four rotating ones there exclusively for the Palo Alto brewpub, with the rest of the lineup produced at the San Jose production brewery, which has been making their beer since it opened in 1997.

The brewers from the production brewery will take turns on the smaller brewhouse, and will be given an opportunity to come with their own experimental recipes. Each one of these will be a one-off, and the series will be known as “Tank 21,” since there are twenty tanks at the production brewery. If one proves popular enough, it may show up later as a new package in wider distribution. 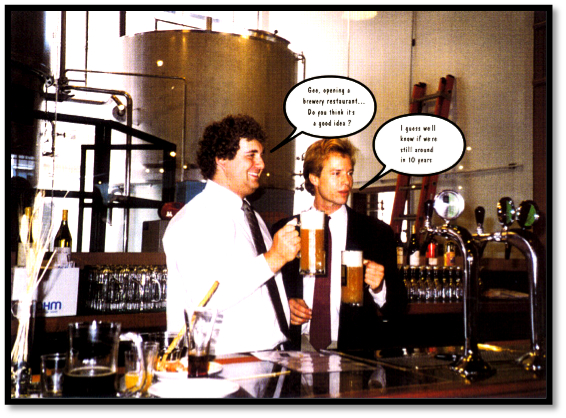 But by far this is my favorite old shot from Palo Alto.
Dan: “Gee, opening a brewery restaurant… Do you think that’s a good idea?”
Dean: “I guess we’ll know if we’re still around in 10 years.”