You are here: Home / Beers / The Drunkard’s Cloak

Once upon a time, society kept everybody in line through social pressure, and if that didn’t work, public humiliation. The pillory was a common punishment, and you’re undoubtedly familiar with the main type, a wooden stake with two perpendicular pieces of wood that fit together, with holes for a person’s head and both hands, so that once all three were secured, you were stuck in the public square for a period of time depending on the severity of your crime. But that was only the most common type, and there were several others, such as the scold’s bridle or the jougs. But there was also a specific pillory used in the case of public drunkenness. In England, it was known as a Drunkard’s Cloak.

According to one source, “Drunkenness was first made a civil offence in England by the Ale Houses Act 1551 and the drunkard’s cloak became a common method of punishing recidivists, especially during the Commonwealth of England. From 1655 Oliver Cromwell suppressed many of England’s alehouses, particularly in Royalist areas, and the authorities made regular use of the cloak.”

The 1655 publication England’s Grievance Discovered, by Ralph Gardiner, describes the Drunkard’s Cloak like this.

Men drove up and down the streets, with a great tub, or barrel, opened in the sides, with a hole in one end, to put through their heads, and to cover their shoulders and bodies, down to the small of their legs, and then close the same, called the new fashioned cloak, and so make them march to the view of all beholders; and this is their punishment for drunkards, or the like.

“Drunkards are to pay a fine of five shillings to the poor, to be paid within one week, or be set in.” 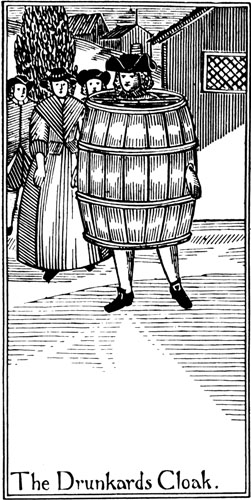 In 1655, John Willis claimed that in Newcastle-upon-Tyne, England, “he hath seen men drove up and down the streets with a great tub or barrel opened in the sides, with a hole in one end to put through their heads, and so cover their shoulders and bodies, down to the small of their legs, and then close the same, called the newfangled cloak, and so make them march to the view of all beholders; and this is their punishments for drunkards and the like.” 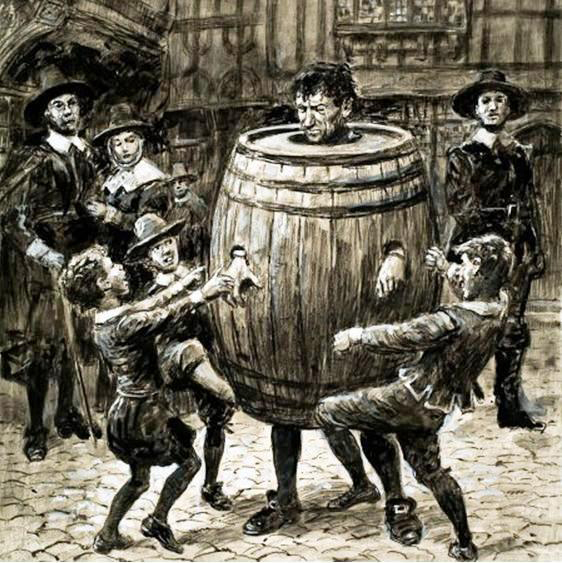 It was also used in other parts of Europe, though often called by different names, such as the Spanish Mantle or the Barrel Pillory. In Germany, it was called a Schandmantel, which means “coat of shame” or “barrel of shame.” 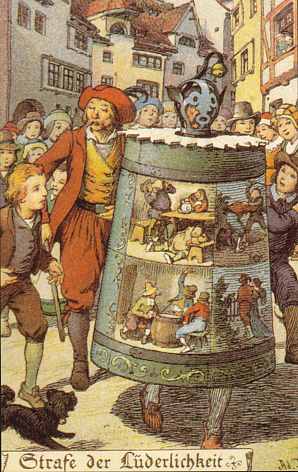 And there’s actual one in the torture museum in Freiburg im Breisgau, Germany. 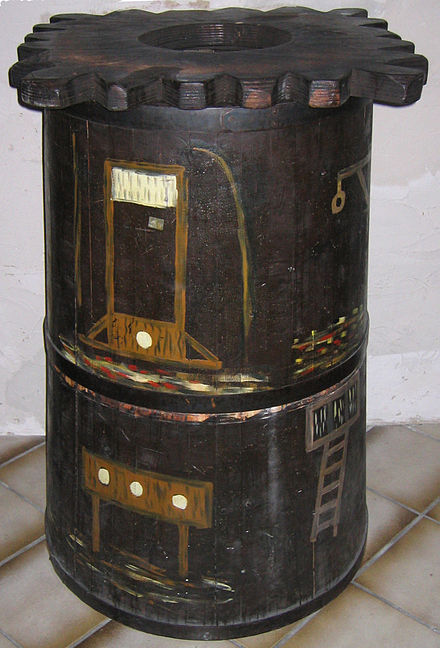 By some accounts, the Spanish Mantle may have been a more serious torture device, intended to inflict more than just humiliation. 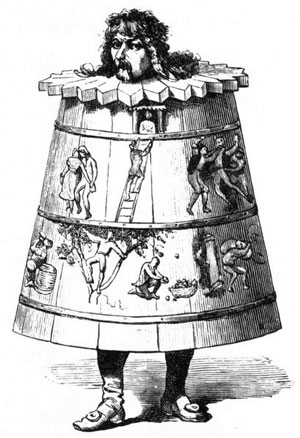 A 1641 diary entry by John Evelyn described one in Delft, Holland as “a weighty vessel of wood, not unlike a butter churn, which the adventurous woman that hath two husbands at one time is to wear on her shoulders, her head peeping out at the top only, and so led about the town, as a penance for her incontinence.” 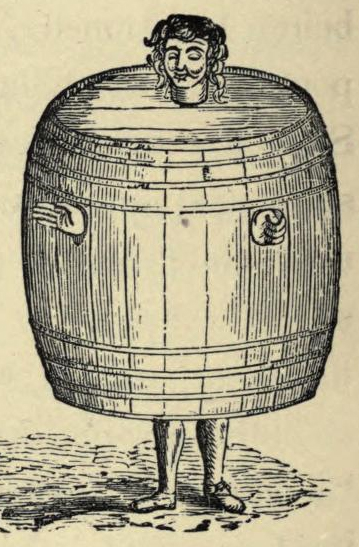 Apparently this type of punishment was not confined to Europe, and also made its way to the American colonies.

Massachusetts Bay Governor John Winthrop, in 1634, noted that Robert Cole (1598-1655), who had come to Massachusetts with the Winthrop Fleet in 1630, “having been oft punished for drunkenness, was now ordered to wear a red D about his neck for a year.” Some literature professors suggest that this was the origin of the story written by Nathaniel Hawthorne, The Scarlet Letter.

“Robert Cole was living in Roxbury, Massachusetts, when he petitioned to be made a “freeman” on 19 Oct 1630, and was granted that status by the General Court on 18 May 1631, along with 113 other men. He was disfranchised 4 Mar 1634, for a short time on account of his problem with drinking too much wine, when he was also ordered to wear a red letter “D” on his clothing for a year; however, his freeman status was reinstated about two months later on 14 May 1634, and the requirement to wear the letter ‘D’ was also revoked at that time.” 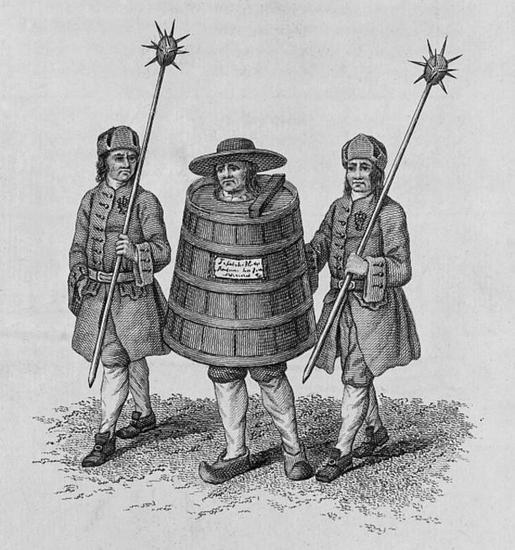 And according to Curious Punishments of Bygone Days, published in 1896 by Alice Morse Earle, it was used during the American Civil War, as well.

Another Union soldier, a member of Company B, Thirteenth Massachusetts Volunteers, writes that while with General Banks at Darnstown, Virginia, he saw a man thus punished who had been found guilty of stealing: With his head in one hole, and his arms in smaller holes on either side of the barrel, placarded “I am a thief,” he was under a corporal’s guard marched with a drum beating the rogue’s march through all the streets of the brigade to which his regiment was attached. Another officer tells me of thus punishing a man who stole liquor. His barrel was ornamented with bottles on either side simulating epaulets, and was labelled “I stole whiskey.” Many other instances might be given. There was usually no military authority for these punishments, but they were simply ordered in cases which seemed too petty for the formality of a court-martial.

This “barrel-shirt,” which was evidently so frequently used in our Civil War, was known as the Drunkard’s Cloak, and it was largely employed in past centuries on the Continent. 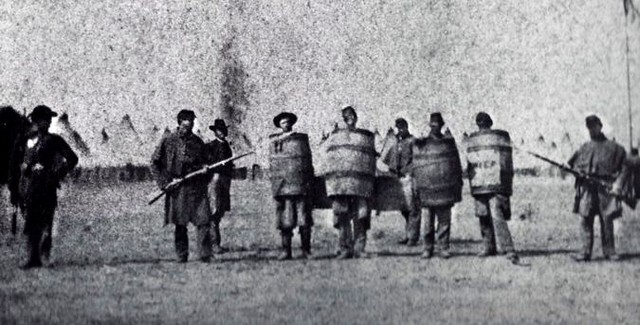 Another eyewitness account from 1862 described the scene as follows. “One wretched delinquent was gratuitously framed in oak, his head being thrust through a hole cut in one end of a barrel, the other end of which had been removed; and the poor fellow loafed about in the most disconsolate manner, looking for all the world like a half-hatched chicken.”

Surprisingly, the most recent example I found for the Drunkard’s Cloak was in 1932, when it was still in use in American prisons, such as the Sunbeam Prison Camp, in Florida, which is where the photo below was taken.

I’m certainly glad that public shaming has, for the most part, been removed from our justice system. Although I’ve never been arrested for public drunkenness, I’ve certainly made a fool of myself in private or with friends, and this certainly seems a bit excessive. Clearly, it was ineffective at controlling peoples’ behavior, but I wonder what it was in the end that finally stopped it being used as a punishment?