You are here: Home / Events / From the Field: Lisa Morrison at the Portland Holiday Ale Fest

A couple of weeks ago the Portland Holiday Ale festival was held in the Rose City and award-winning beer writer — and Portland resident — Lisa Morrison was on hand to sample the holiday beers. Lisa filed this report along with a few pictures from the festival. Thanks, Lisa, for sharing the festival with us!

I don’t have a lot of detail on how well the fest was attended or anything, but I do know the “buzz” beer was called Jim, named after Jim Kennedy, one of the patriarchs of Portland beer and, really, one of the founding fathers of the good beer movement nationally. It was created by Preston Weesner and Alan Sprints (Hair of the Dog). It was conceptualized one day when the two were sitting around talking and enjoying some beer and cheese. Preston said Maredsous 8 was always a “Jim beer” for him in that he thought of Jim whenever he enjoyed it. They worked on a blend of some Hair of the Dog beers with a keg of M8 and Alan painstakingly aged it in oak barrels until the fest. Truly a one-time, one-of-a-kind beer that was appreciated and celebrated by all. A fitting tribute to a really great guy. 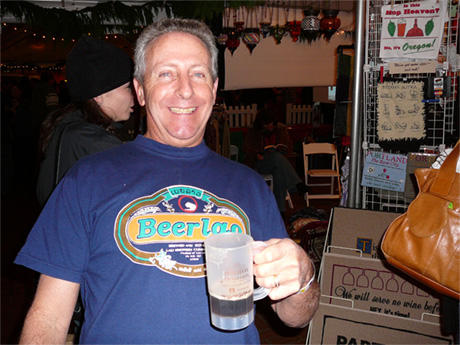 Fest-goer Eric Bressman shows off a T-shirt from recent travels while enjoying a beer at the fest. 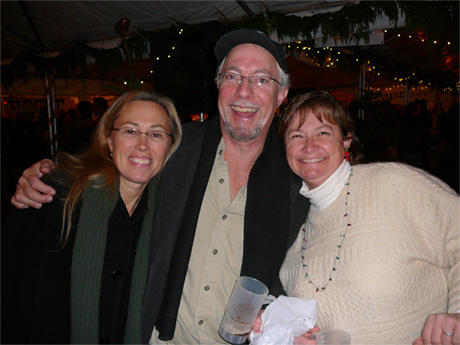 Having some fun at the Holiday Ale Festival. 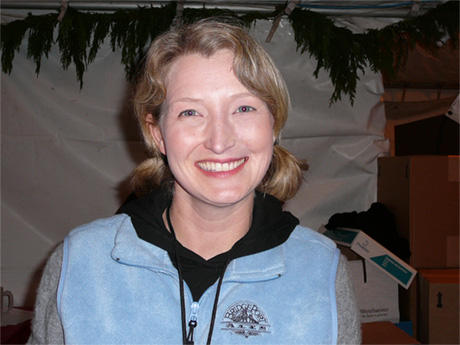 Chris Crabb, who does PR and is an organizer for the event, keeping chaos under control. With a smile, even!