You are here: Home / Beers / He’Brew National Release Party at the Toronado

Last night my friend Jeremy Cowan held a National Release Party for his two new beers, Genesis 10:10, Shmaltz Brewing’s 10th anniversary beer, and Lenny’s R.I.P.A, a Rye Double IPA in honor of Lenny Bruce, who died forty years ago this year. As usual, the Toronado was jumping and there were several friends in attendance. Mercifully, it was no longer opressively hot and a nice cool breeze was circulating around the Toronado, which is quite unusual in my experience.

And the beginning of his kingdom was Babel, and Erech, and Accad, and Calneh, in the land of Shinar.

In case you’re curious, this chapter of the Torah/Bible concerns the history of Noah and the other survivors’ offspring post-flood and this verse is talking specifically about Nimrod.

I’d tasted the Genesis 10:10 a couple of weeks ago and it’s a really terrific strong beer. The original Genesis Ale, from ten years ago, had pomegranates in it so Jeremy used pomegranate juice in the anniversary ale. As I understand it, it was added to fermentation about halfway through and as a result the yeast didn’t drop out for a week longer than expected. I don’t know if that’s the reason or not, but you’d never know from tasting this beer that it’s 10% abv.

The RIPA used 20% rye, which is a lot, but it’s not overpowering in the final beer. Personally I like rye, so perhaps I have a higher tolerance for it than most. To me rye does more for the mouthfeel and texture than for flavor though the distinctive rye character was certainly present there, too, especially when enjoying it with a sandwich on rye bread, which I made for myself while I was there. This is a great twist on an imperial IPA and the rye makes it stand out — in a good way — from the usual doubles. 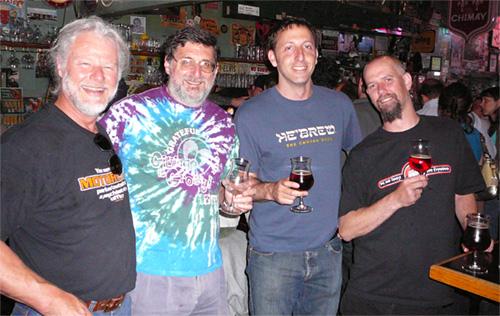 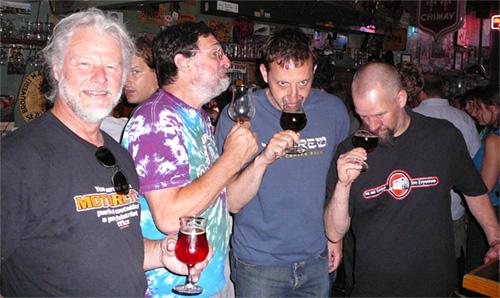 Last one to stick his nose in his glass buys a round. Sorry Alec.