Today is the birthday of William Alton Carter III, better known as Billy Carter (March 29, 1937–September 25, 1988). He “was an American farmer, businessman, and politician. Carter promoted Billy Beer, and was a candidate for Mayor of Plains, Georgia. He was also the younger brother of former Georgia Governor and U.S. President Jimmy Carter,” who signed into law the bill re-legalizing homebrewing. 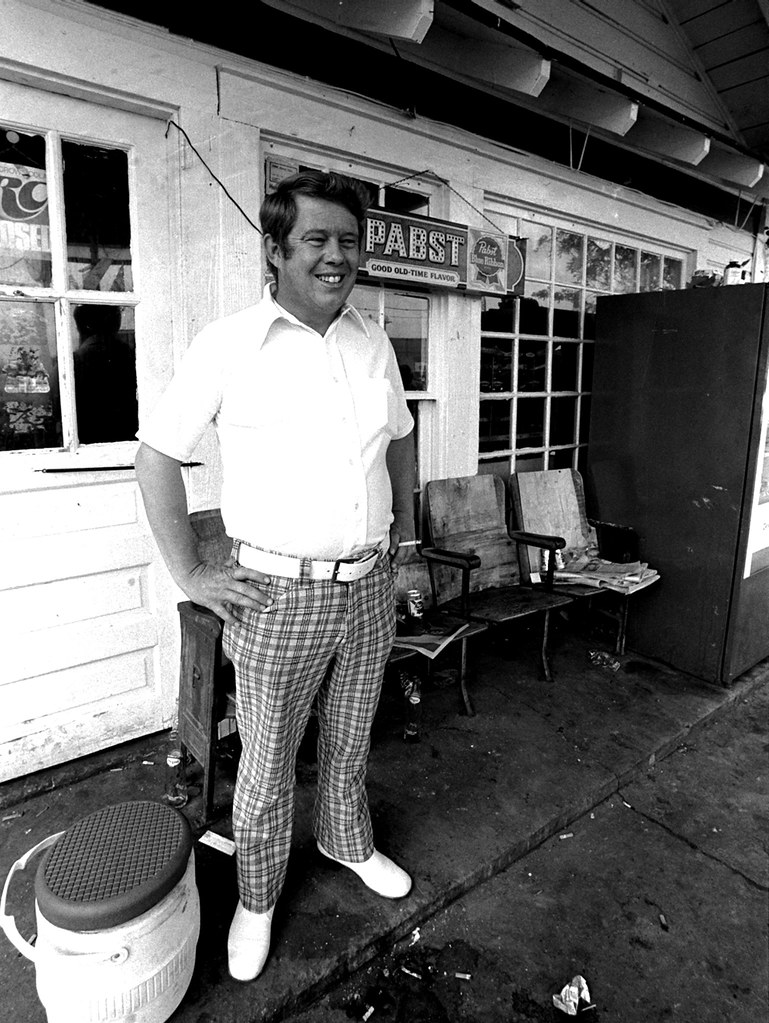 He was a proud redneck, and capitalized on his image as a beer-drinking roughneck bumpkin to sell Billy Beer. 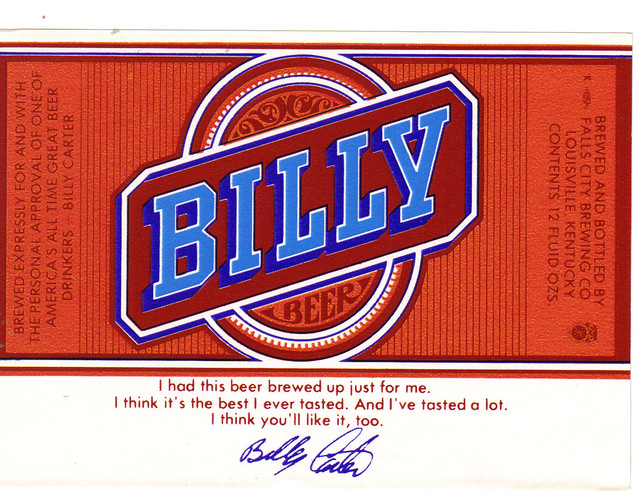 Billy Beer was a beer first made in the United States in July 1977, by the Falls City Brewing Company. It was promoted by Billy Carter, whose older brother Jimmy was the incumbent President of the United States. In October 1978, Falls City announced that it was closing its doors after less than a year of Carter’s promotion. The beer was produced by Cold Spring Brewing, West End Brewing, and Pearl Brewing Company.

Each can from the four breweries that produced it were slightly different. And you can see those differences in the cans below. 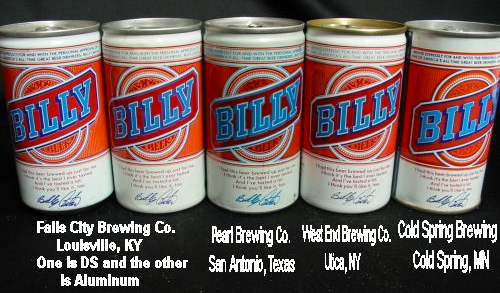 “After Billy Beer ceased production, advertisements appeared in newspapers offering to sell Billy Beer cans for several hundred to several thousands of dollars each, attempting to profit from their perceived rarity. However, since the cans were actually produced in the millions, the real value of a can ranged from 50 cents to one dollar in 1981.” 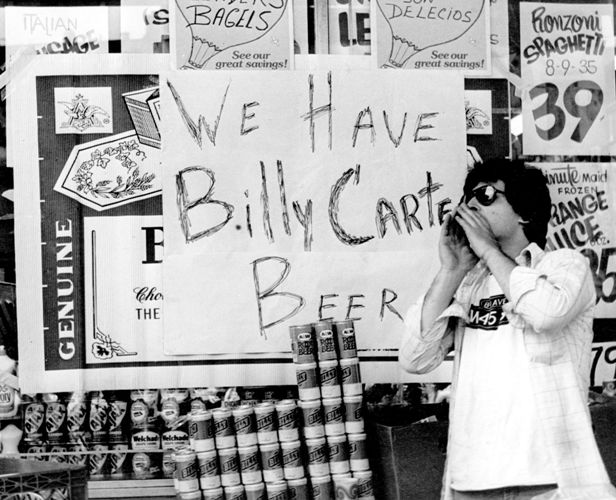 “Billy Beer was also featured on an episode of the reality series Auction Kings, where an appraiser deemed a case of unopened Billy Beer to be worthless; however, at the featured auction, the case was sold for $100.” 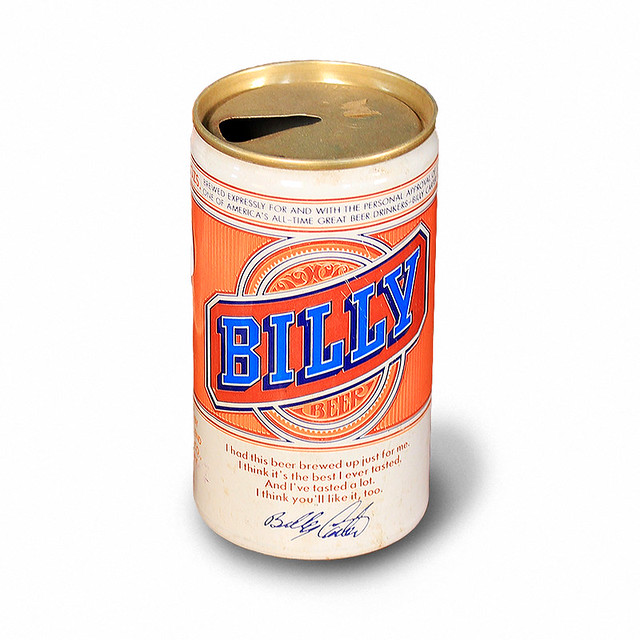 Here’s part of his story from 6 Presidential Siblings and the Headaches They Caused, published in Mental Floss:

Truly the standard by which all other presidential sibling’s antics are judged, Billy burst onto the national scene as the boisterous, hard-drinking counterpoint to his pious, reserved brother Jimmy. Billy’s early antics were amusing and fairly innocuous: he endorsed the legendarily terrible Billy Beer in an effort to make a little cash off of his hard-living image, and he made quips like, “My mother went into the Peace Corps when she was sixty-eight. My one sister is a motorcycle freak, my other sister is a Holy Roller evangelist and my brother is running for president. I’m the only sane one in the family.” While he worked hard to convey a roughneck bumpkin image to the press, Billy’s confidantes claimed that he was in fact well-read and an able businessman who used his Southern bona fides to help his older brother’s political cause. On the other hand, Billy’s drinking turned from amusing to tragic as his fame grew.

In 1979, he had to go into rehab to curb his drinking. Around the same time he nearly lost his Georgia home to the IRS for failing to pay a six-figure federal income tax bill for 1978.

The real capper, though, came when Billy began consorting with Libya at a time when relations between the North African nation and the U.S. were starting to strain. In 1978 he made a trip to Libya with a group of Georgia businessmen who were interested in expanding trade with the country; Billy then hosted a Libyan delegation in Atlanta. When questioned about his dealings, Billy responded, “The only thing I can say is there is a hell of a lot more Arabians than there is Jews,” a public-relations nightmare for which he later apologized. The damage got worse in 1980 when Billy registered as an agent of the Libyan government and received a $220,000 loan from the Libyans for helping facilitate oil sales. This transaction led to accusations of influence peddling and a Congressional investigation. In short, it was enough to make Jimmy Carter long for the days when his brother’s antics only included such little quirks as urinating in public in front of a group of reporters and dignitaries.

Mental Floss has an article entitled A Brief History of Billy Beer, which is actually a reasonably thorough account. 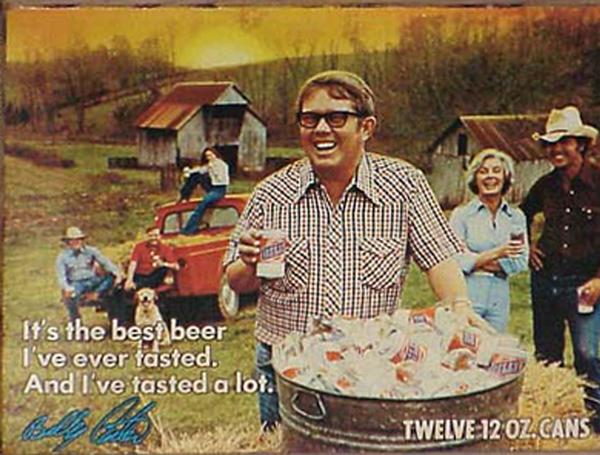 The side of the twelve-pack carton of Billy Beer.

And here’s his biography from Find-a-Grave:

Folk Figure, Businessman. Known for his outlandish public behavior, he was a younger brother of former Georgia Governor and US President Jimmy Carter. After graduating from high school, he attended Emory University in Atlanta, Georgia but did not complete a degree. He then served four years in the US Marine Corps and after his discharge, he returned to Plains, Georgia to work with his brother in the family business of growing peanuts. In 1972 he purchased a gas and service station in Plains and operated it for most of the 1970s. In 1976 he attempted to enter the political ring when he ran for mayor of Plains but lost the election. In 1977 he endorsed Billy Beer, capitalizing upon his colorful image as a beer-drinking Southern “good ol’ boy” that developed in the press when his brother ran for US President. After Billy Beer failed, he was forced to sell his house to settle back taxes owed to the Internal Revenue Service. In late 1978 and early 1979, he visited Libya three times with a contingent from Georgia, eventually registering as a foreign agent of the Libyan government and received a $220,000 loan. This led to a US Senate hearing on alleged influence peddling which the press named “Billygate.” In the autumn of 1987, he was diagnosed with pancreatic cancer, and after receiving unsuccessful treatments for the disease, he died the following year at the age of 51. In 1999 his son, William “Buddy” Carter, published a biography of his father titled “Billy Carter: A Journey Through the Shadows.” 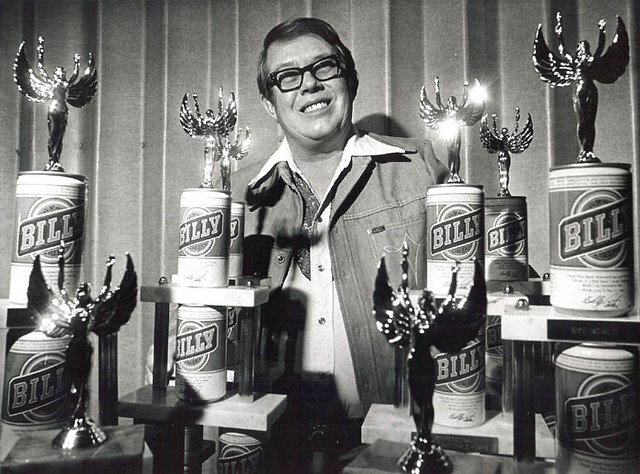 The hit television show The Simpsons featured Homer drinking a can of Billy Beer in the 1997 episode “Lisa the Skeptic”; after Bart tells him that the skeleton he is trying to hide is probably old enough already, he counters Bart’s remark by introducing his Billy Beer stating that people said the same thing about the beer. After he drinks the beer, he says “We elected the wrong Carter”. Also in the 1992 episode “The Otto Show”, Homer excitedly finds a can of Billy Beer in the pocket of his old “concert jacket”, and drinks it. 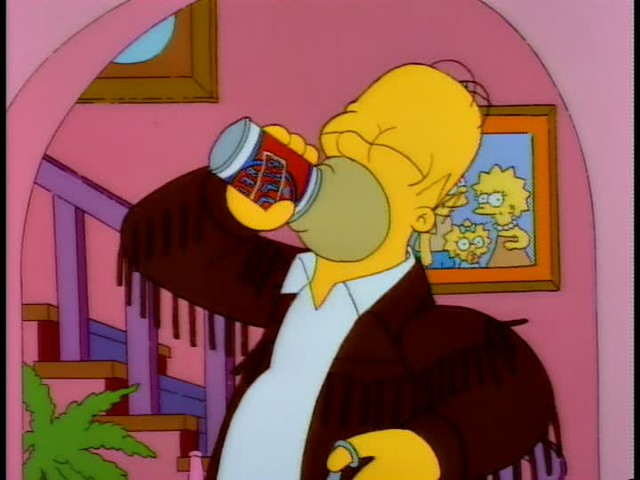