Today is the birthday of John Taylor (March 13, 1790-September 13, 1863). He was born in England, but came to American with his family when he was just three years old, settling eventually in Albany, New York. He initially went into the candle-making business with his father, but in 1822 switched to brewing and opened the Lancelot Fiddler Brewery, renaming the John Taylor Brewery a few years later, and adding “and Sons” around 1844, before closing for good in 1905. Here’s a short biography from the History of the county of Albany, N. Y., published in 1886:

John Taylor, Mayor 1848-49, was born in Durham, England, March 1790 and died in Albany September 31, 1863. He migrated to Brooklyn with his father when a mere infant, and to Albany in 1793. He engaged in the business of a tallow-chandler with his father when he was seventeen years old, and before he was twenty-three he had been burned out four times. Then his fortunes changed. He began to make money about 1813 as an army contractor. In 1822 he became a brewer, and from this business realized an ample fortune. He had branches in Boston and New York later, conducted by his sons. He gave freely of his wealth to the poor, and to all objects that promised to benefit the city. He became a great reader, and accumulated a larger larger and more valuable than any in the city in his time. He gained great popularity and wealth at the same time by a steady course of industry, enterprise, integrity, philanthropy and virtue. Taylor’s Brewery is still occupied [1886] at 133 Broadway. 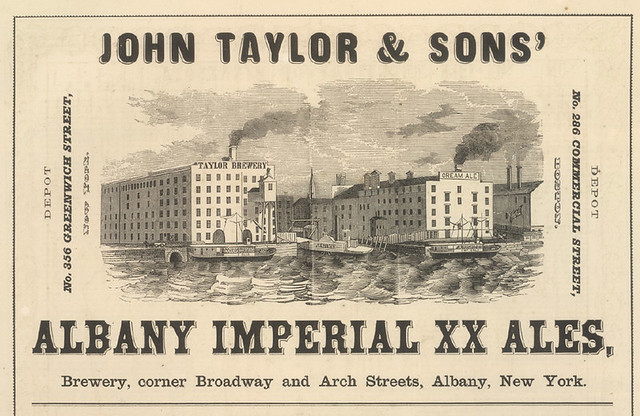 And this portion of What Was Albany Ale? from the Albany Ale Project, by Alan McLeod and Craig Gravina, discussed John Taylor and his brewery:

Albany’s 150 years of Dutch family breweries established the city as a well-known brewing center. At this time, the first advertisements for “Albany Ale” began to appear as a euphemistic term for the best beer—of any kind—brewed in Albany. The completion of the Erie Canal in 1825 and an Albany brewer named John Taylor would soon change that perception.

John Taylor & Sons’ Taylor opened his first brewery in the early 1820s and second larger one in 1831. A savvy businessman, Taylor saw the opportunity to exploit New York’s new water highway. Albany’s access to the Hudson River and position at the terminus of the Erie Canal afforded it a monopoly on the distribution of beer. Raw materials for beer making could be brought east to Albany via the Canal, and Taylor, in-turn could export his beer south, down the Hudson River to the port of New York. From there the beer could shipped anywhere in the world. By the 1850s Taylor had built the largest brewery in the country in Albany, capable of producing 200,000 barrels of beer a year. Taylor began advertising a double X ale, which would become his flagship beer, that he dubbed “Imperial Albany XX Ale.” As the demand for this double X strength ale grew, so did the number of breweries in the city—seventeen by the mid-1860s—almost all of them producing some kind of XX strength Albany Ale. No longer was Albany Ale a euphemism; it had become a specific thing.

And Craig, for Session 56, wrote Thanks to John Taylor – the Original American Big Boy, which goes into more detail. 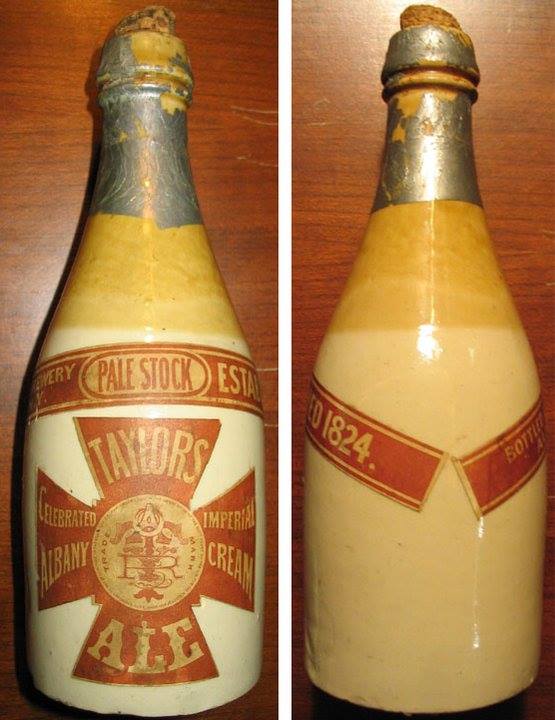