You are here: Home / Breweries / Iowa Sinkhole May Be 150-Year Old Beer Cave

Last month during a routine inspection, a Cedar Rapids, Iowa bridge inspector found a suspicious looking hole in the ground. At first, he thought it might be a “potentially hazardous sinkhole near an Interstate 380 access ramp,” but as he, and others looked closer, it may actually be a 150-year old beer cave, part of the Christian Magnus Eagle Brewery and Bottling Works. According to a local newspaper report in 1977, “excavators had unexpectedly pierced a beer cave during construction of this stretch of I-380 when they were digging to lay a culvert north of Eighth Street” so it’s seems that’s the likeliest explanation. 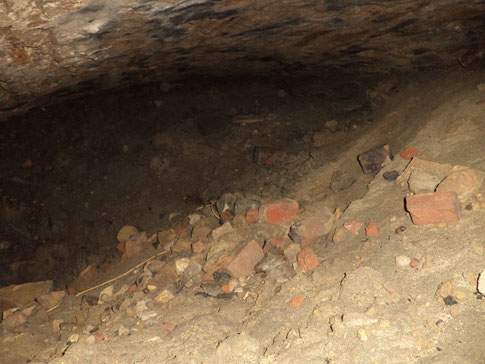 Apparently, a archaeologist and an architectural historian,among others, are investigating, and are keeping an open mind that it could be any number of things. A local historian, on the hand, appears quite certain it’s the beer caves, and in the local newspaper, The Gazette, appears ready to go record with his belief that they’re beer caves:

“They are the Magnus beer caves. That’s exactly what they are,” Hunter said after hearing of the discovery. “This is very exciting as an historian.”

The brewery was constructed by Jacob Wetzel in 1859.

Wetzel hired an old world brewer from Germany named Christian Magnus as his brewmaster and foreman, according to The Gazette’s Time Machine. Beer caves were essential to Magnus’ vision for the beer cooling and aging process. The brewery was a five-story complex overlooking Cedar Lake, but the back ran into a hill where the caves were located.

The brewery had five cellars that could hold 2,000 barrels, two ice houses that held up to 2,300 tons of ice, and a capacity to produce 60 barrels of beer in 12 hours.

Magnus bought out Wetzel in 1868, and at the height of production, the Christian Magnus Eagle Brewery and Bottling Works put out 25,000 barrels of 4.5 percent beer in the late 1800s and early 1900s.

Hunter said the brewery was possibly best known for Eagle Brewing, a popular beer with a logo of an eagle perched on a beer keg with its wings stretched wide and a man tapping the keg.

The brewery closed because of prohibition in 1915, although it operated for several more years producing soft drinks, among other items, before entirely shutting down in the 1920 and being demolished in 1937, Hunter said.

Hunter said in later years homeless people would use the caves, and they were later boarded up. However, children would break through the boards with “skull and cross bone — do not enter warning” to explore.

A neighborhood then was built on top of the beer caves, before being torn down for I-380, he said. 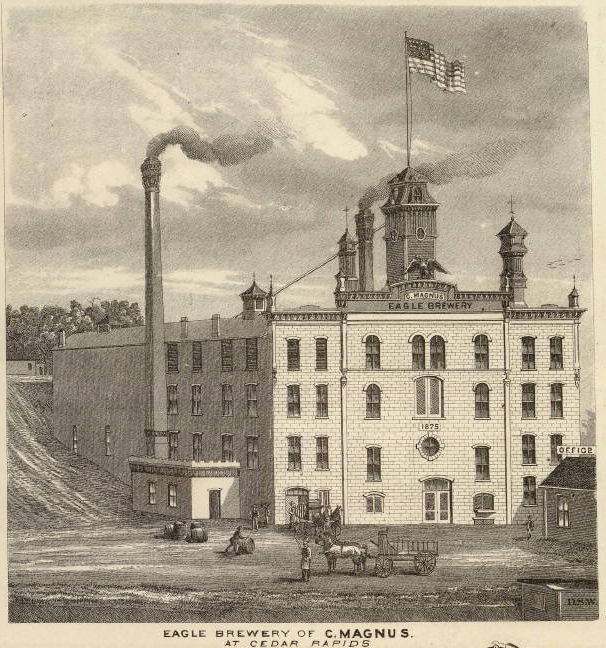 The brewery from a lithograph done around 1875.

And here’s a photograph of the brewery, believed to be from 1870, from another piece in the Gazette about the Original Breweries. 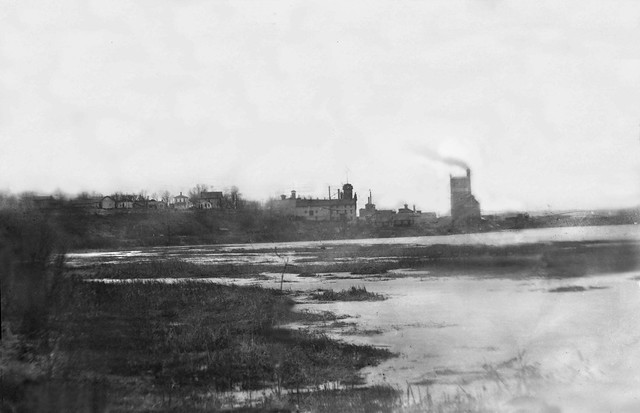 Cedar Rapids, city of. Historical Views. Little caption information available. Photo appears to show a view of the Magnus Brewery (center), looking southwest over Cedar Lake. The brewery was located near present day Quaker Oats plant. The original Eagle Brewery was established in 1859 by Christian Magnus at the corner of Ely and Van Buren, modern D Avenue (D Ave.) and Eighth Street (Eighth St) NE in Cedar Rapids. The brewery produced beer and ale in a structure made from Anamosa stone and was considered one of the best breweries in Iowa. An immigrant from Germany, Magnus originally started a brewery for Jacob Wetzel in Cedar Rapids in 1859. In 1868, Magnus bought out his former employer and continued the European tradition of aging his beer in cold cellars beneath the brewery. When prohibition threatened his local brewing empire, Magnus invested his earning in such ventures as the Magnus Hotel, a longtime downtown landmark which fell to urban renewal during the 1970s.