You are here: Home / Beers / John Updike’s Paean To The Beer Can

Today is one of my favorite author’s birthdays, John Updike. He grew up in the same small Pennsylvania town that I did — Shillington — and we both escaped to a life of writing. Though I think you’ll agree he did rather better than I did with the writing thing, not that I’m complaining. I once wrote to him about a harebrained idea I had about writing updated Olinger stories from the perspective of the next generation (his Olinger Stories were a series of short tales set in Olinger, which was essentially his fictional name for Shillington). He wrote me back a nice note of encouragement on a hand-typed postcard that he signed, which today hangs in my office as a reminder and for inspiration. Anyway, this little gem he wrote for the The New Yorker in 1964 is a favorite of mine and I now post it each year in his honor. Enjoy. 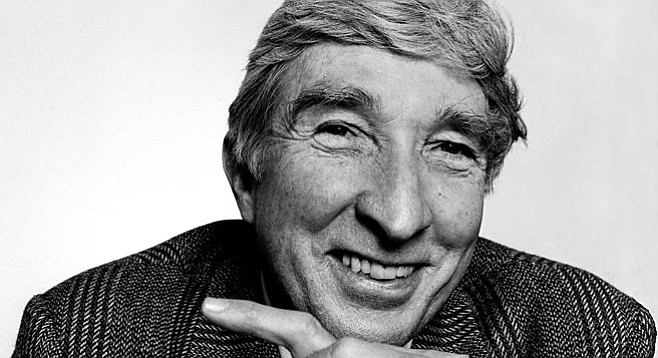 Beer Can by John Updike

This seems to be an era of gratuitous inventions and negative improvements. Consider the beer can. It was beautiful — as beautiful as the clothespin, as inevitable as the wine bottle, as dignified and reassuring as the fire hydrant. A tranquil cylinder of delightfully resonant metal, it could be opened in an instant, requiring only the application of a handy gadget freely dispensed by every grocer. Who can forget the small, symmetrical thrill of those two triangular punctures, the dainty pfff, the little crest of suds that foamed eagerly in the exultation of release? Now we are given, instead, a top beetling with an ugly, shmoo-shaped tab, which, after fiercely resisting the tugging, bleeding fingers of the thirsty man, threatens his lips with a dangerous and hideous hole. However, we have discovered a way to thwart Progress, usually so unthwartable. Turn the beer can upside down and open the bottom. The bottom is still the way the top used to be. True, this operation gives the beer an unsettling jolt, and the sight of a consistently inverted beer can might make people edgy, not to say queasy. But the latter difficulty could be eliminated if manufacturers would design cans that looked the same whichever end was up, like playing cards. What we need is Progress with an escape hatch.

Now that’s writing. I especially like his allusion to the beauty of the clothespin as I am an unabashed lover of clothespins.

In case you’re not as old and curmudgeonly as me — and who is? — he’s talking about the transition to the pull-tab beer can (introduced between 1962-64) to replace the flat punch-top can that required you to punch two triangular holes in the top of the can in order to drink the beer and pour it in a glass.

The pull-tab (at left) replaced the punch top (right).

Originally known as the Zip Top, Rusty Cans has an informative and entertaining history of them. Now you know why a lot of bottle openers still have that triangle-shaped punch on one end.

So essentially, he’s lamenting the death of the old style beer can which most people considered a pain to open and downright impossible should you be without the necessary church key opener. He is correct, however, that the newfangled suckers were sharp and did cut fingers and lips on occasion, even snapping off without opening from time to time. But you still have to laugh at the unwillingness to embrace change (and possibly progress) even though he was only 32 at the time; hardly a normally curmudgeonly age.