I try not to pick on my fellow beer writers too much, especially as I’m acutely aware of my own imperfections and ability to make mistakes. I’m human, too, just like everyone else. But I make an exception for Todd Haefer, who writes the syndicated column “The Beer Man” for Gannett News Service. He took over for the original — and now Real Beer Man — Jim Lundstrom, when he left his position in 2005. You can read Jim’s account in a comment from a previous post I did about one of Haefer’s articles. I’ve written twice about Haefer spreading information I considered, um … unhelpful … back in the fall of 2006. One was about declaring barrel-aged beer dead and the other trashing Lagunitas’ labels.

Since then, I’ve pretty much ignored him. Whenever I see his byline come up in the wires, I just don’t look at it, figuring it’s not really worth my time. Maybe that’s unfair, but a Bulletin reader sent me his latest missive (thanks Doug) and I see I haven’t been missing much. It’s titled Farewell to Farmhouse Kolsch and sings the praises of a Kolsch brewed at least nine months ago, and probably even longer than that. Farmhouse Brewing was the brainchild of my friend Jeff Moses. He created the brand when he took over as GM of Coast Range Brewing in Gilroy, California several years ago. The Coast Range brand inexplicably didn’t sell well and so he figured a new brand name wouldn’t carry the same baggage. Coast Range’s brewer, Peter Licht, was quite talented and came up with some tasty beers under the Farmhouse label. Farmhouse beers did reasonably well, but it wasn’t enough to stave off the inevitable and Coast Range filed a Chapter 11 Reorganization bankruptcy in December of 2007, shuttering their doors at the same time. Having looked at the filing (I used to be in the bankruptcy business, believe it or not) it did not look good for their eventual successful reorganization owing primarily to some outstanding tax burdens accumulated over the years. Something like only one out of every ten Chapter 11 filings results in a successful reorganization. Most are converted to liquidation bankruptcies, with assets sold off to pay creditors.

Given their dire outlook, I stopped paying attention and right now don’t know where their case is at this point. It’s probably not over yet. These things tend to take a while. But in the meantime, whatever beer had been bottled before (or possibly just after) the filing is, according to the Beer Man, now being sold in Wisconsin, and he’s heard it’s also in Minnesota and New York, too. Undoubtedly, the Trustee got whatever he could for the beer and sold it at fire sale prices, probably cents on the dollar, just to get rid of it and get at least something for creditors.

Haefer speculates about their curious marketing of a Kolsch as a farmhouse ale — dude, there is no marketing for this beer, the company no longer exists. And when there was it was a brand name, a label, they never intended that anyone think all the beers were trying to be authentic farmhouse beers. All of the labels featured a crude folk-style painting of a barn from the area where the style of beer was originally brewed. Nobody was pretending that Kolsch or Porter or IPA was a farmhouse beer in terms of its style. 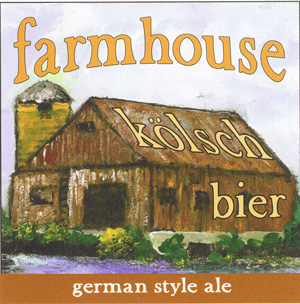 Haefer goes on to give us his tasting notes on the beer, finding no fault with it whatsoever, and expressing his sadness in knowing that “it will no longer be made.” He finishes the article with some helpful hints to guide his readers on how they might find this elusive, all but extinct beer.

Since the brewery is no longer producing, the availability of Farmhouse Kolsch depends on whether local distributors took advantage of the liquidation sale. The brewery’s other beers that may pop up include a porter, saison, pale ale, imperial pale ale and a pilsner. It’s sad to have a beer like this and know it will no longer be made.

Many beers are available only regionally. Check the brewer’s Web site, which often contains information on product availability by mail.

Haefer knows they’re in bankruptcy and no longer brewing. What makes him think someone is updating the website with who’s carrying the liquidated beer outside of their home market? And couldn’t he have checked first? That way he would have discovered for himself that there’s almost no information about their availability on the website.

I guess I’m baffled by why any writer would choose to champion a beer that almost no one reading his work could find and even if they could, would be well past its prime, having been out-of-code for at least five months. Coast Range, like most craft breweries, did not pasteurize their beers, giving them a shelf life of roughly 3-4 months. That it’s so good to the Beer Man’s taste is either a testament to the craftsmanship and longevity of the beer itself, beating the odds and presumably having been handled spectacularly well every step of its long journey from brewery to warehouse to cross-country discount store, or to something else entirely — which decorum prevents me from saying. But I think you can figure it out. Beer man indeed.