With the San Francisco Chronicle breaking the news last night about Anchor Brewery building a second, and much larger, brewery near the waterfront at Pier 48, I was immediately keen to find out more. I knew from my earlier discussions with the new owners, and especially Keith Greggor, that they wanted to build the business but were dead set on keeping the business in San Francisco. But since they’re already the largest manufacturer within the city limits, that prospect must have been a daunting — and ultimately very expensive — task.

The new proposed brewery is being built in partnership with the San Francisco Giants and their 27-acre Mission Rock development project. Here’s more information about it from the press release released this morning.

Anchor will continue to operate its facility in Potrero Hill, but will greatly expand its operations with the development of the Pier 48 facility. The two facilities will allow the company to quadruple its annual production capacity from 180,000 barrels to 680,000 barrels.

Pier 48, the southern-most structure of the Port’s Embarcadero Historic District, will be fully rehabilitated and re-established as an industrial hub of the central waterfront. The new Anchor facility will feature production facilities for brewing, distilling, packaging, storing, and shipping; a restaurant, museum and educational facility in the headhouse of Pier 48; and a restored walkway around the entire pier apron that will connect pedestrians to the Portwalk and allow views into the Anchor brewhouse. Anchor will offer tours of the facilities and educational seminars with a focus on the history of craft beer, the art of craft distilling and Anchor’s history in San Francisco. The construction project beginning late 2014 will feature the use of green and sustainable materials, setting the standard for a modern urban brewery.

The Anchor expansion will create approximately 200 new jobs, 75% of which are production-oriented positions that employ a diverse work force.

“We are making things in San Francisco and creating a magnet for jobs for thousands of people from every background in our thriving local manufacturing sector,” said Mayor Ed Lee. “Making sure our homegrown companies stay and grow right here in San Francisco remains my top priority and I want to thank Anchor Brewing and the San Francisco Giants for driving the engine of economic growth, bringing jobs and revitalizing our world class waterfront.”

The Anchor Brewery expansion project also represents the first major tenant of the Mission Rock Project — a new, mixed use urban neighborhood currently being developed by the San Francisco Giants. The Anchor Brewing facility will cover 22% of the overall project site.

“As a longtime partner of the Giants, we are delighted to welcome Anchor Brewing to the waterfront and to partner with them on what will become an exciting place for San Franciscans to live, work and play,” said Larry Baer, Giants President and CEO. “Given the rich history of the Giants and Anchor Brewing in San Francisco, it is only fitting that we work together to help transform this historic part of the City’s waterfront.”

In addition to Anchor Brewing’s new facility, the Mission Rock Project will include more than eight acres of parks and open space, 650-1,500 residential units, 1-1.7 million square feet office space, parking structure to serve ballpark and Mission Rock patrons, and up to 250,000 square feet of retail, restaurants, and public amenities. In total, Mission Rock is expected to create 4,800 construction jobs and 6,400 permanent jobs. 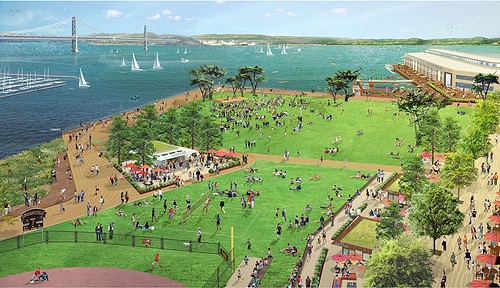 Last April, SocketSite began showing artist drawings of what the proposed site might look like with their post Mission Rock Plans Dusted Off With Giants Swinging For A 2015 Start and last month’s Giants Moving Forward With Massive “Mission Rock” Development. 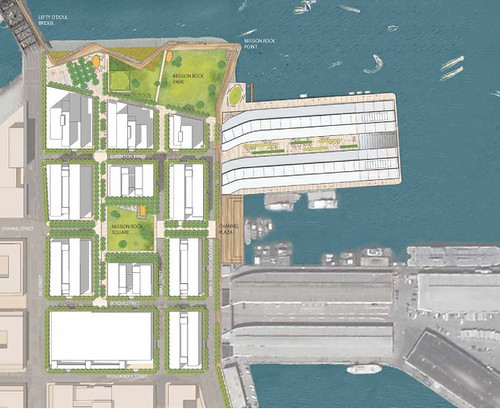 Here’s an overview of the 27-acre site, of which approximately 22% will be the Anchor Brewery complex. It will apparently be 212,000 square feet and will ultimately allow total beer production to be increased to an impressive 680,000 barrels annually. “The new Anchor facility will feature production facilities for brewing, distilling, packaging, storing, and shipping; a restaurant, museum and educational facility in the headhouse of Pier 48; and a restored walkway around the entire pier apron that will connect pedestrians to the Portwalk and allow views into the Anchor brewhouse.” As you can see in the drawing below, there will also be a substantial outdoor beer garden. 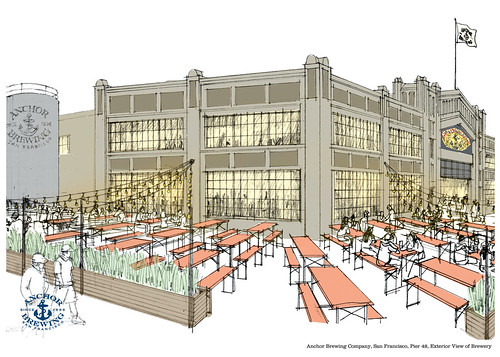 The interior of the proposed restaurant portion of the Anchor Brewery project, with the brewhouse visible in the background. 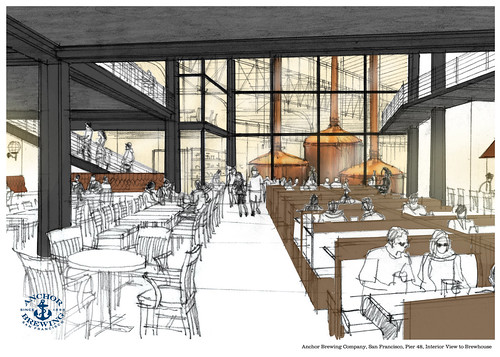 This afternoon, I had a chance to talk with Anchor co-owner Keith Greggor, who was kind enough to fill me in on some of the other aspects of the project. Here’s what I learned.

Anchor has been talking to the Giants about the Mission Rock project for at least the last year and a half, and the city and Mayor Ed Lee are especially thrilled that a deal could be done. Apparently, it’s a perfect expression of Mayor Lee’s “keep and grow” concept for keeping businesses from leaving San Francisco as they succeed and grow larger. In fact, the mayor apparently suggested Anchor as a tenant, not realizing at the time that it might actually work. The Port is also very happy to have only one tenant, and it has to be a day and night difference having the city, local politicians and the landlord all very supportive and happy to have a brewery there, which is not the situation that often occurs.

Anchor will eventually take over all of Pier 48, but will begin renovating Shed A, and will later take on Shed B, too. The two sheds are essentially different buildings with what they call a “valley” in between. Most of the design work is done, and the first order of business will be to spruce up the building. They expect to move in during the 3rd Quarter of 2014 and be open by the 4th Quarter of 2015.

Perhaps the most amazing news is that they already have a brewhouse for the new location. About twenty years ago, a nearly exact duplicate of Anchor’s current copper brewhouse came on the market in Germany, and Fritz Maytag bought it, hoping to use it when Anchor expanded. But later Maytag decided against moving the brewery and instead had been storing the equipment ever since. The only difference between the two is that the newer one is over twice as big, and is a 270-barrel brewhouse. In addition to brewing at Pier 48, they will also have a working distillery there, but will also continue to make gin and whisky at the Potrero Hill location, too.

The museum portion of the project will include Anchor’s massive brewing book collection and breweriana, including a recent purchase of another collection from a gentlemen who’d been collecting his entire life and recently decided to sell it all. There will also be an educational component, and will be similar to their original concept of having a “Center of Excellence” that the Griffin Group talked about when they first bought Anchor. Greggor had been talking about the Mission Rock project with Fritz Maytag the entire time during the negotiations, and Maytag is reported to be very happy with the new brewery plan.

Still undecided is the restaurant, which will not be a brewpub. They may yet partner with someone to do the food, but since the restaurant will be one of the later parts of the project to be completed, they’re still weighing their options. The current estimate is that the restaurant won’t open until 2017.

Looking at it from all the angles, it really seems like an elegant solution to the thorny problem of how to grow the business without sacrificing what makes Anchor such a great brand. They’ll have a more public space, perfect for tourists, locals and baseball fans, and will be able to make even more Anchor beer right in San Francisco. It will create jobs, help with the economy and should attract more tenants to the Mission Rock development project. What’s not to like?

And finally, below is ABC 7‘s coverage of the news: