You probably already know about the thousands (just over 8,800) of beer industry professionals who have become Certified Beer Servers in Ray Daniels’ Cicerone program since it was launched in 2007. It’s essentially the beer equivalent of a sommelier. But did you know there are actually three levels of Cicerone certification? Until recently, only three persons had attained the third level, that of Master Cicerone, and one of them is Bay Area brewer Rich Higgins, who brews at Social Kitchen. Now a fourth person has earned the lofty position of Master Cicerone. It was announced today that Nicole Erny of “Oakland, CA earned the title of Master Cicerone® during testing in November.” That makes Erny not just the fourth Master Cicerone, but also both the first woman and the youngest person to reach that level. It also means that half of the world’s Master Cicerones are in the Bay Area.

Erny earned the certification through a series of exams culminating with two days of intense taste testing plus written and oral questioning about beer styles, draft systems, beer evaluation, brewing technology and beer and food pairing given November 9 & 10. The Master Cicerone exam includes 8 hours of written questions, 2 hours of oral questions and 2 hours of beer tasting and evaluation. Candidates needed an overall score of 85% to pass.

“During the Master Cicerone exam, Erny distinguished herself with her knowledge of all aspects of beer and her skill in tasting beer and creating interesting beer and food pairings,” said Ray Daniels, Director of the Cicerone Certification Program.

Since earning her Bachelor’s Degree in 2007, Erny has worked a specialty beer bartender, consultant and beer educator, putting on classes and beer and food pairings. She has sharpened her palate and beer analysis skills as a homebrewed beer judge and already holds the title of National Judge in the Beer Judge Certification Program.

Join me in congratulating Nicole on her wonderful achievement. 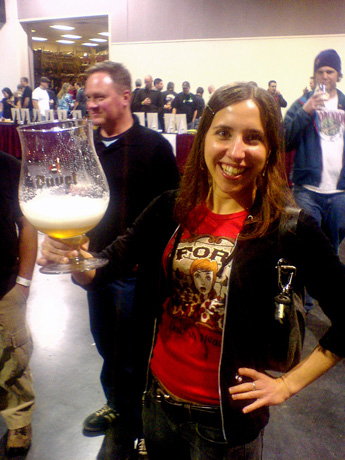 At the Celebrator’s 20th Anniversary Party in 2008.