Today in 1914, US Patent 1084943 A was issued, an invention of John Von Der Kammer, for his “Process of Manufacturing Malt.” There’s no Abstract, although in the description it includes this summary:

I have invented certain new and useful Improvements in Processes of Manufacturing Malt,

ing substances in a tightly closed tank for the purpose of obtaining preliminary germination, and after the discharges of the solution, it is left to itself in the tank which is again closed, until the greatest possible quantity of water has been absorbed. Thereupon the barley is continuously moved in the closed tank until the formation of enzymes and conversion into a complete state of mealiness, without any further addition of nourishing substances in order to prevent an over-germination.

A sectional view of an apparatus preferably employed in carrying out the present process is illustrated in the accompanying drawing.

A rotatable drum is preferably used as a germination tank, the. wall of which may consist, as shown in the-accompanying drawing, of a casing a of perforated sheet metal surrounded by a corrugated;-sheet metal casing b with the casing a resting on the corrugations. In that way, on the one hand, the casing a is strengthened, and, on the other hand, conduits 0 are formed through which the liquid escaping from the drum may be discharged.

The process is carried out in the following manner: The barley, without having been previously steeped, is placed in the drum, and then moistened with such’a quantity of nourishing substance liquid that the said liquid submerges the barley. The impurities contained therein, rise to the surface, and are discharged through an opening 12 in one of the end walls of the drum. After a short action, for instance up to half an hour, it is discharged through the conduits 0, and the apparatus is closed, so that air cannot enter from the outside. After the grain has been left to itself for several hours, nourishing liquid is again added. The moment for the supply of new nourishing liquid is indicated by the fact that the barley appears dry. This process is repeated three or four times or as many times until 30-36 hours have passed. Then no more nourishing liquid is supplied, but the barley is left to itself in the closed apparatus for 6268 hours, according to the nature of the barley and to the kind of the nourishing substances, and then at once brought into the drying kiln. With the exception of short intervals for the supply and discharge of the nourishing substance solution, the drum is rotated during the Whole of the process.

Owing to the barley which is to germinate, not having been previously steeped, as has been the rule hitherto, the substances of the grain intended for the germination and formation of enzymes are retained and utilized in the germinating process. Owing to that, the germination begins more quickly, and therefore enzyme are formed earlier. Both processes are assisted by the supply of nourishing solution, whereby the consumption of endosperm substances for nourishing the germs is limited or entirely avoided. Owing to the omission of steeping as a process separate and distinct from the process of germination and development of the enzymes, a considerable economy is moreover effected in the first cost and the cost of maintenance. Moreover, a complete swelling up of the barley and therefore a proper. loosening up of the endosperm substance, is obtained. During the first six hours of the process there takes place, as shown by practical experiments, such ‘a strong absorption of water that the increase in weight of the barley amounts to about 45%. After another six hours, it’ amounts to about 50%, and after the first period of the process, that is to say, during the first 30-36 hours,’during which nourishing liquid added, to about -70%. During the first period, a germination takes place with the formation of roots, the said. germination being completed in the next 14-18 hours of the second period. At the same time, an over-germination is prevented not only by the complete suppression and consumption ‘of nourishing substance solution and moisture, but also by the continuous movement of the barley. At the same time and during the next 418 hours, the multiplication and, the activity of the enzyme continuously increase, and a conversion to a complete state of mealiness and therefore a better quality of the green malt is insured, and a higher yield of malt is obtained than with the known processes. 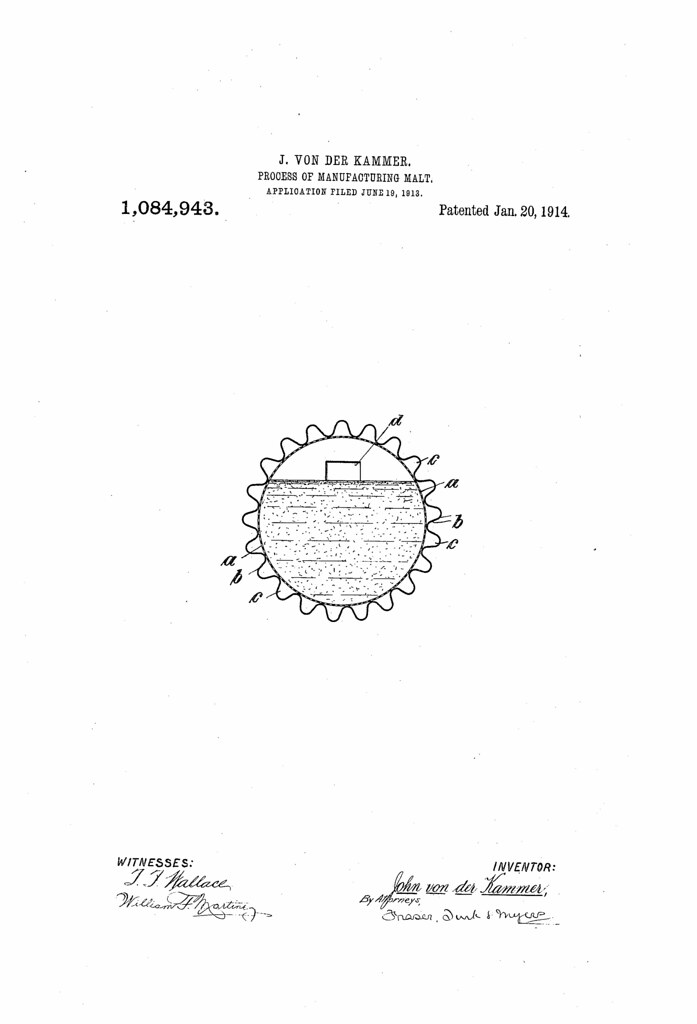