Today in 1960, US Patent 2938643 A was issued, an invention of Milton L. Geiser and George L. Herr, assigned to Armstrong Cork Co., for his “Closure.” There’s no Abstract, though it’s described this way in the application. “This invention relates to a bung, and more particularly to an elastomeric bung to replace the cork bung for insertion in the bung bushing of a barrel.” Which is fairly vague, so here’s quite a bit more explanation:

In order for a bung to function properly for this purpose, it is necessary that it be designed so that it can be driven easily into the bung bushing with existing driving equipment, will be held securely in position in the bung bushing to prevent the pressure developed in the keg from blowing the bung out of its sealing position, and also can be driven on through the bung bushing into the keg when the tap pump is inserted to remove the beer from the keg. Due to the fact that it must be driven into the keg and also due to the fact that the interior of the bung is in engagement with the contents of the keg, it is essential that the bong be produced from materials which will not have a toxic or other deleterious effect on the contents of the keg.

Several attempts have been made to produce bungs from plastic material such as polyethylene, and the general trend has been toward a bung which forms a seal by providing a continuous ledge around the bottom edge of the bung which is exerted against the shoulder or bottom surface of the bung bushing. In order to insure this seal, it is necessary to have a rather heavily reinforced bottom edge on the skirt of the bung which is usually deformed during the insertion of the bung into the keg, which deformation impairs the sealing characteristics of the bung. When this reinforcing ring is compressed during insertion, there is no space provided into which the compressed material can be distributed. Because of this material distribution, the bottom skirt either develops a fold or the reinforced ring assumes an oval shape in the opening in the bung bushing. In the case of the fold, the material forming the bung is usually ruptured, resulting in an improper seal; and in the case of the assumed oval, the bung is cocked in the bushing to such an extent that the top edge of the opening in the bushing gouges sections from the side of the hung. in either instance the sealing qualities of the bung are greatly impaired.

Other plastic bungs have been developed having a scrim of ribs around the skirt of the bung, giving line contact between the bung and the bushing at several points in the bushing. This line contact has not been satisfactory due to the fact that bushings through reuse become scored on their inner or sealing surface. With these score marks, it is not easy to seal the contents of the barrel with a polyethylene bung having several line contact points throughout the depth of the bung. In structures having a plurality of sealing rings around the skirt of the bung, these rings are of necessity of such nature that they serve as reinforcing rings and prevent the expansion of the bung to permit the wall of the bung to be urged against the bushing by the internal pressure on the bung. Here again, with a plurality of reinforcing rings surrounding the bung, there is no opportunity for the material in the rings to be redistributed; therefore, the ring tries to assume an oval shape and in so doing cocks the hung in the opening in the bushing, causing areas near the top of the bushing to be gouged.

Keeping in mind the limitations of the existing bung’s, the hollow, cup-shaped bung of this invention was ‘developed to be easily inserted without deformation ‘of “the bottom of the cylindrical skirt and without cocking of the bung in the opening of the bung bushing, leaving a relatively large area of the skirt of the bung for sealing engagement with the internal surface of the bushing, and at the same time provide suitably reinforced rings for sealing score marks in the bung bushing. 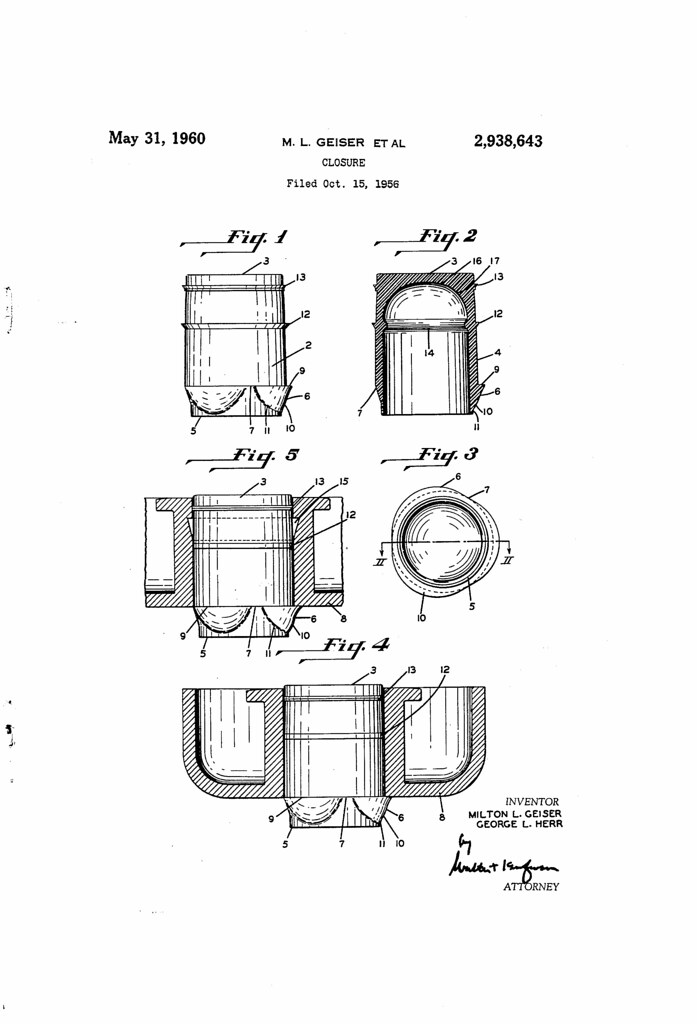