Today in 1965, US Patent 3212335 A was issued, an invention of Joseph A. Guiffre, for his “Beer Keg Measuring Device.” There’s no Abstract, although in the description it includes this summary:

In the industry wherein the device of my invention is to be utilized, tap beer is sold to taverns and bars in metal kegs which are loaded in the brewery under pressure. Due to the pressure constantly maintained within a filled or partially filled keg of beer no practical device has as yet been found in the industry which will permit the operator of the business, wherein the beer is sold at tap, to determine the amount of beer sold at any interval of time, or the amount of beer which he has left in an opened or used keg. Because of his inability to determine this needed information, the shop keeper is often times inconvenienced at a rather busy hour to change from a keg which has just been emptied to another fresh keg.

Moreover, in not being able to accurately determine the amount of beer sold within a certain period of time, as for example, from the open of a business day to its close, the owner of such business is unable to determine if he is getting all the receipts which should be forthcoming from each keg of beer or ale.

An object of my invention is to provide a pressure keg measuring device which can be quickly connected to measure the amount of beer remaining in a used keg of beer or ale yet under pressure.

A further object of my invention is to provide a pressure keg measuring device which can be quickly connected to measure the remaining beer in a keg under pressure, while the keg of beer is in its usual position under the dispensing fountain in a tavern or bar.

Another and further object of my invention is to provide a beer measuring device for pressure beer kegs which is simple in construction, economical to manufacture, and which will provide the user with a device which can easily and quickly be connected to a keg for measurement of the quantity of beer or ale remaining therein. 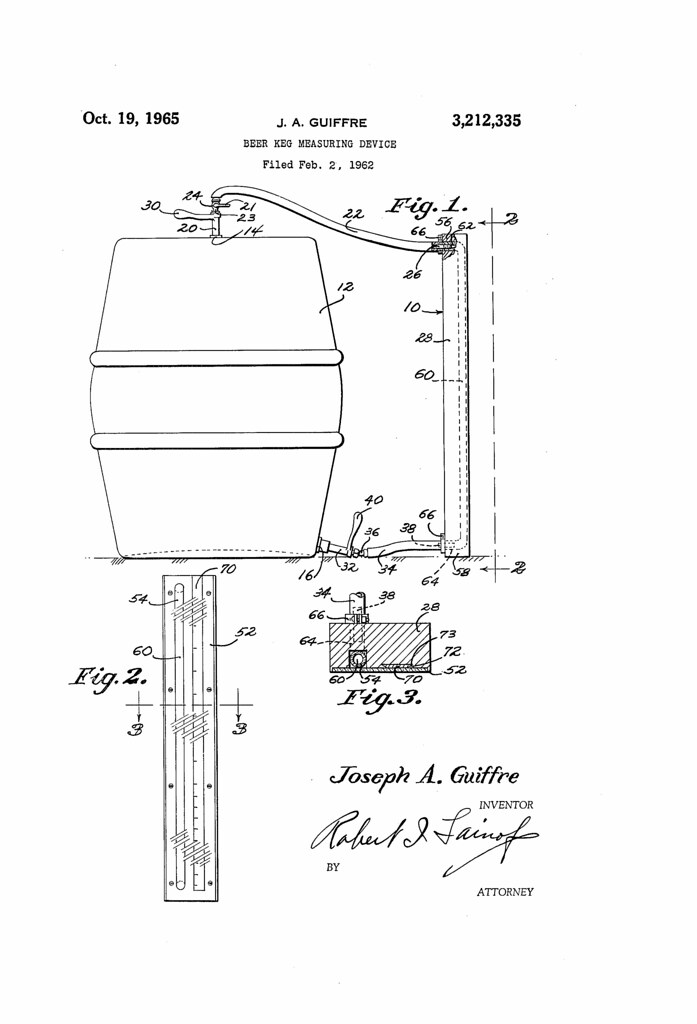