Today in 1971, US Patent 3594995 A was issued, an invention of Thomas Lee Evans and Charlie J. Soules, for their “Hop-Picking Machine.” There’s no Abstract, although in the description it includes this summary:

This invention relates to hop-picking machines and, more particularly, to novel, improved machines for field picking hops from vines hanging from overhead wires or trellises or other supports.

We have now developed a novel, improved machine for filed picking hops which does not have the drawbacks of machines heretofore proposed for this purpose and accordingly represents a significant advance in the art over the latter. The novel hop-picking machines of the present invention are preferably self-propelled and, generally speaking, include graspers for engaging the lower ends of the vines and maintaining them in picking position as they move through the machine, picking cuts for stripping the hops from the vines, a conveyor arrangement for carrying the hops away, a cutter for severing the vines to free them from the supports, and an arrangement for expelling picked vines from the machine.

One of the important advantages of the novel hoppicking machine described herein is that, being self-propelled, it can be maneuvered through a field more easily and much faster than the cumbersome pushed-type” picker described in the Horst patents identified above and is accordingly capable of picking hops at a much higher rate. Another advantage, also resulting in increased capacity, is that the machines of the present invention are capable of picking two rows of vines simultaneously in contrast to the patented Horst machines which are single-row pickers.

In the Horst machines, the vines are pulled down through the machine as they are picked. Accordingly, a field hand must accompany the machine and cut the vines free from the trellises as they move into the machine. Applicant’s novel machine in contrast does not depend on downward movement of the vines they are picked; and, moreover, it is provided with its own cutter for severing the vines to free them from the trellises. Accordingly, the necessity of employing hand labor for this purpose is eliminated by the present invention together with the attendant expense.

In conjunction with the foregoing, another novel and important feature ofthe present invention is that the picking cats are vertically adjustable. This makes it possible to quickly adjust the cats as the heights of the overhead supports change so that the vines can be picked clean up to the supports.

Another important feature of the present invention is a novel conveyor for the hops stripped from the vines which normally discharges into a truck or the like but can be employed to store picked hops so that the machine can continue to pick while a loaded truck is being replaced or the machine is turning at the end ofa row, etc. In similar circumstances the picking operation would have be stopped in heretofore proposed machines such as those .described in .the Horst patents, for example.

Yet another important feature of the present invention is a novel grasper line for holding the vines in the proper position for picking in which the grapsers are moved at a speed matching the ground speed of the picking machine. Further, the grapscr line is configured to compensate for sagging vinesupporting wires, thereby ensuring that the vines are grasped at the proper location.

Other important features of the invention are a novel cutter mechanism for severing the vines and freeing them from the trellises and a novel mechanism for expelling the picked vines from the machine. Yet another novel and important feature of the invention is that the operating mechanisms are powered entirely by hydraulic motors, substantially eliminating belt and chain and similar drives. This makes the novel machines disclosed herein significantly simpler than comparable prior art harvesters. 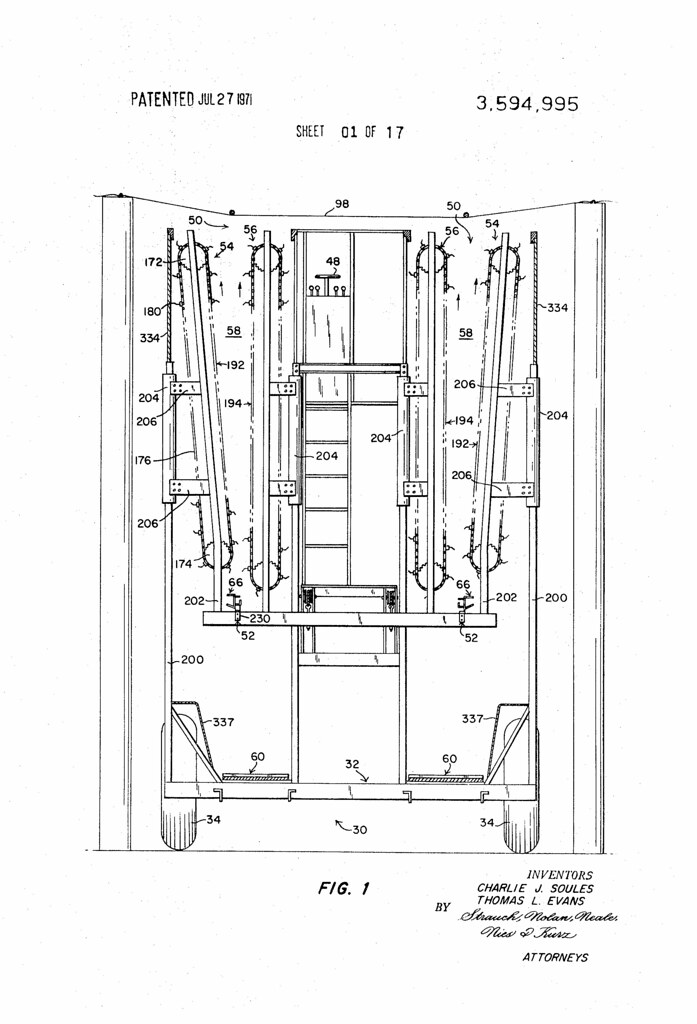 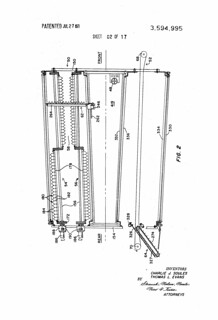 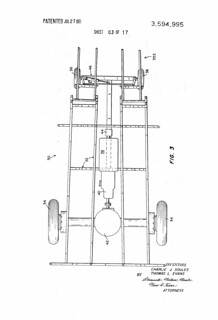 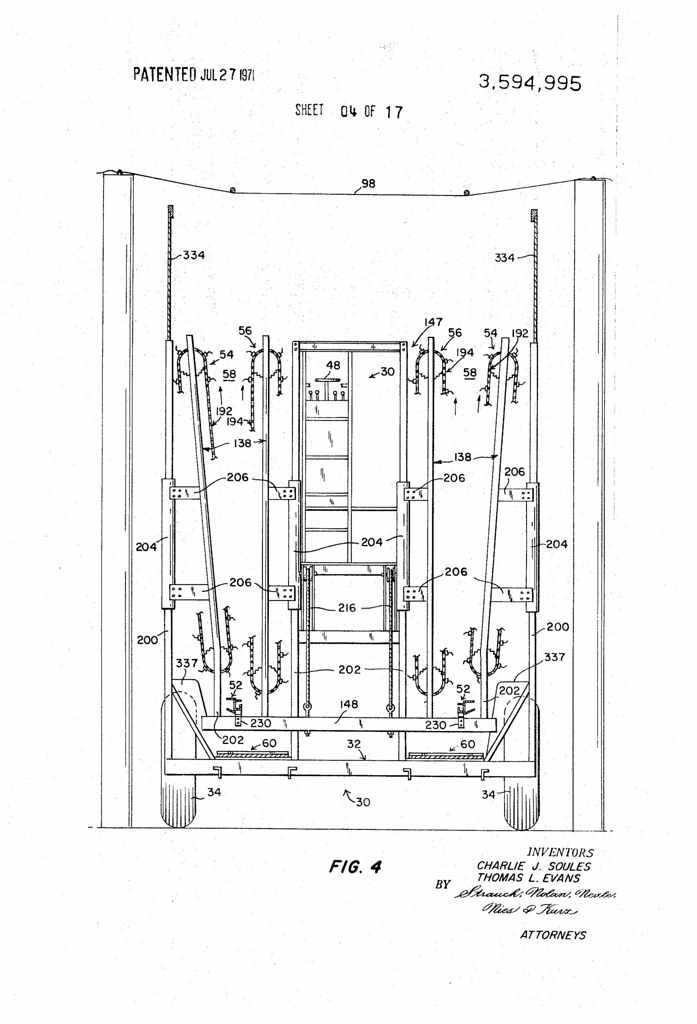 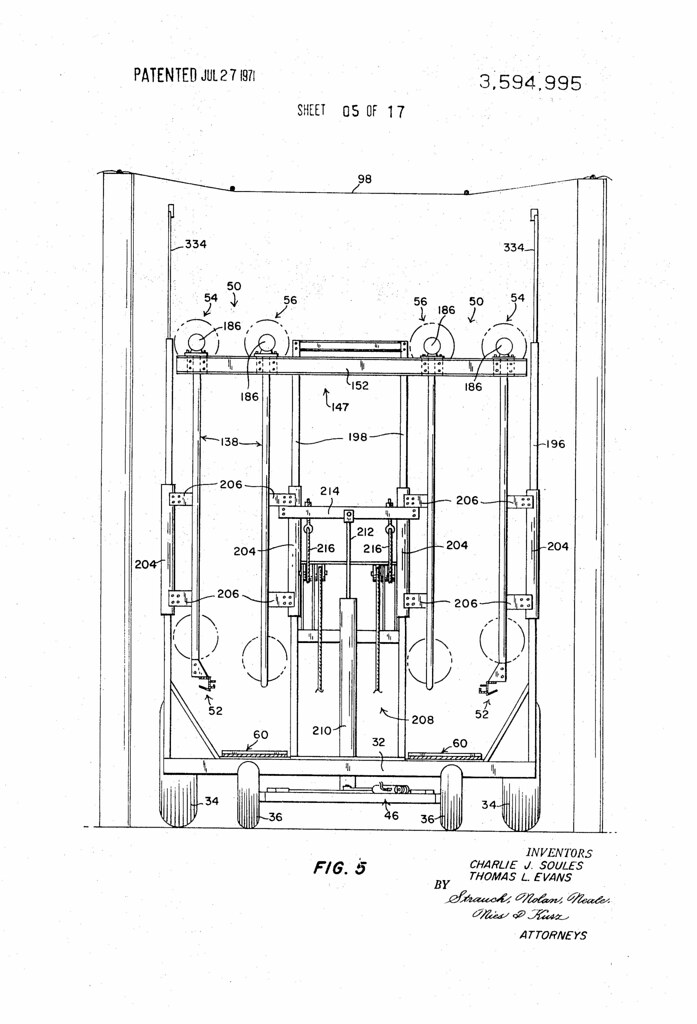 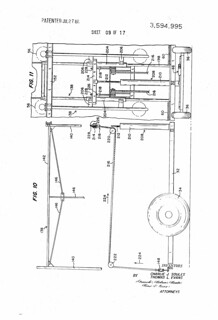 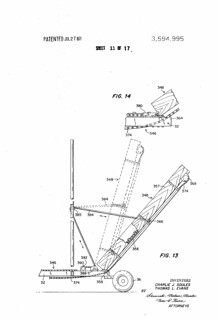 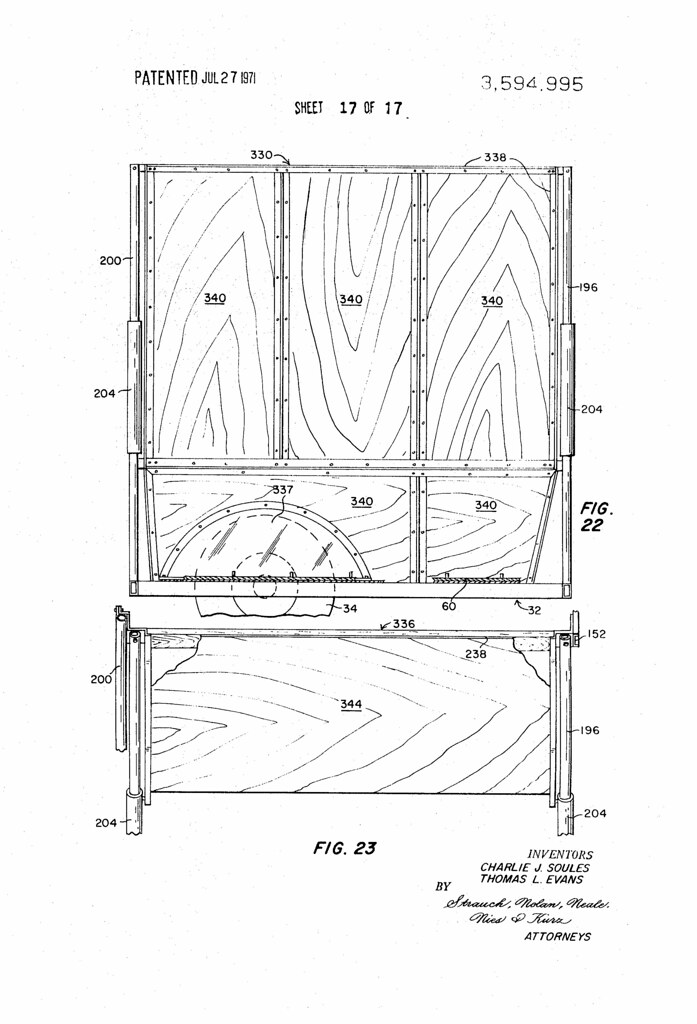