You are here: Home / Birthdays / Pliny Buried By Vesuvius

While no one is sure when Pliny the Elder was born — it was sometime around 23 CE — we do know exactly when he died: it was August 25, 79 CE. How can we be so sure? Well, because the day before, August 24, Mount Vesuvius in the Gulf of Naples in southwest Italy, erupted, completely destroying the town of Pompeii. “Pompeii, along with Herculaneum and many villas in the surrounding area, was mostly destroyed and buried under 13 to 20 feet of ash and pumice in the eruption.” We know about this catastrophic event because of a letter by Pliny the Elder’s nephew, Pliny the Younger, “who saw the eruption from a distance and described the death of his uncle, an admiral of the Roman fleet, who tried to rescue citizens.” It’s sounds like it was a pretty awful event, here described on Wikipedia:

That eruption ejected a cloud of stones, ash and fumes to a height of 33 km (20.5 mi) [another source said 27 miles!], spewing molten rock and pulverized pumice at the rate of 1.5 million tons per second, ultimately releasing a hundred thousand times the thermal energy released by the Hiroshima bombing. An estimated 16,000 people died due to hydrothermal pyroclastic flows. The only surviving eyewitness account of the event consists of two letters by Pliny the Younger to the historian Tacitus. 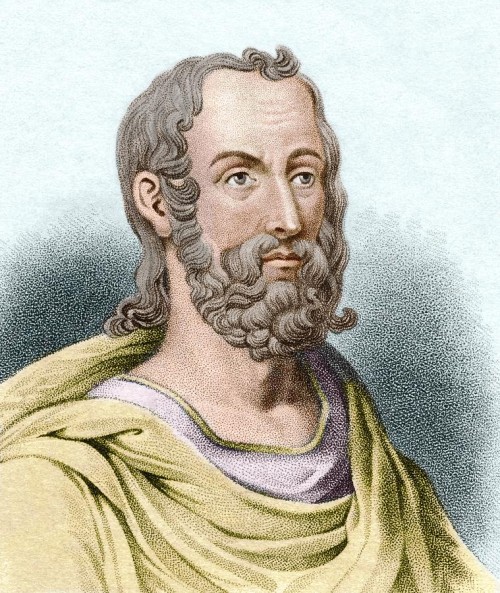 Although known as Pliny the Elder, he was born Gaius Plinius Secundus and studied law and worked as a naval and army commander during the early Roman Empire. But he’s known today more for his writing, specifically “his encyclopedic work, Naturalis Historia, which became a model for all other encyclopedias.” Apparently he spent most of his time off “studying, writing or investigating natural and geographic phenomena in the field,” and the Naturalis Historia was his last work, and ran to 37 volumes, essentially the accumulation of everything he studied over his lifetime. 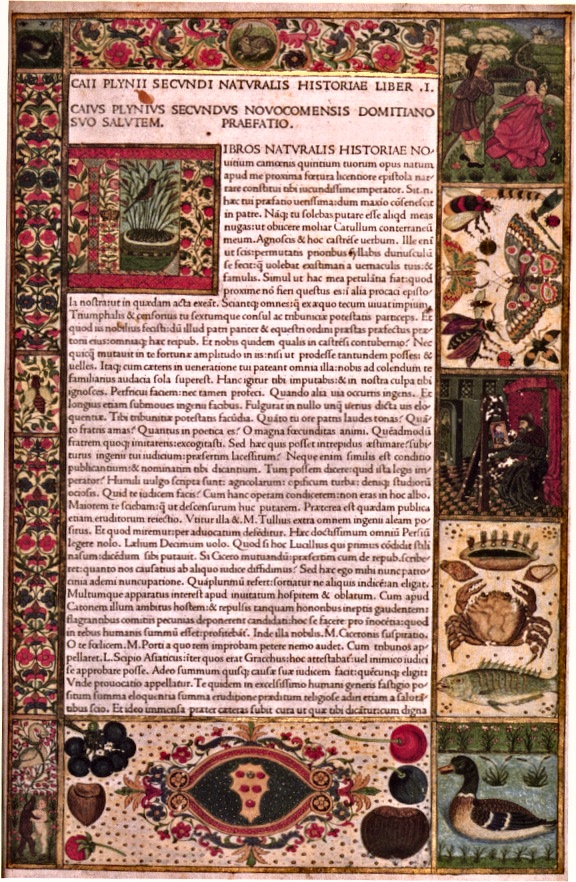 A page from a 1472 printing of Pliny’s Natural History.

This is the famous book where Pliny may have first mentioned wild hops, using his own term, “Lupus salictarius,” or “willow wolf,” to describe the plant. The brief mention of hops occurs in Book XXI, in Chapter 50.

Here’s the original Latin text of Pliny from the Teubner editions of the text:

This version is from the Second English translation, by John Bostock and Henry Thomas Riley, 1855:

CHAP. 50. (15.)—PLANTS WHICH GROW SPONTANEOUSLY: THE USE MADE OF THEM BY VARIOUS NATIONS, THEIR NATURE, AND REMARKABLE FACTS CONNECTED WITH THEM. THE STRAW- BERRY, THE TAMNUS, AND THE BUTCHER’S BROOM. THE BATIS, TWO VARIETIES OF IT. THE MEADOW PARSNIP. THE HOP.

We now come to the plants which grow spontaneously, and which are employed as an aliment by most nations, the people of Egypt in particular, where they abound in such vast quantities, that, extremely prolific as that country is in corn, it is perhaps the only one that could subsist without it: so abundant are its resources in the various kinds of food to be obtained from plants.
In Italy, however, we are acquainted with but very few of them; those few being the strawberry,1 the tamnus,2 the butcher’s broom,3 the sea4 batis, and the garden batis,5 known by some persons as Gallic asparagus; in addition to which we may mention the meadow parsnip6 and the hop,7 which may be rather termed amusements for the botanist than articles of food.

7 “Lupus salictarius,” the “willow wolf,” literally; the Humulus lupulus of Linnæus. It probably took its Latin name from the tenacity with which it clung to willows and osiers.

L. There follow the plants that grow wild. Most peoples use these for food, especially the people of Egypt, a land very fruitful in crops, yet about the only one that could manage without them, so great an abundance of food does it get from plants. In Italy however we know few such, strawberries, wild vine, butcher’s broom, samphire, and garden fennel, which some call Gallic asparagus; besides these there are meadow parsnip and willow wolf, though these are delicacies rather than foods.

As you can see, what Pliny says is hardly definitive, and it seems not at all clear that what he’s mentioned in passing may or may not be the same thing as the hops used to make beer today. That’s been the conventional wisdom for a long time, but as we learn time and time again, that doesn’t make it true. Happily, Martyn Cornell looked at this question a few years ago, finding some of the answers to So what DID Pliny the Elder say about hops?

Here’s where the trouble begins:

The first person to identify Pliny’s lupus salictarius as the plant that Italians call lupulo, the Spanish lúpulo, Germans Hopfen and English-speakers hops seems to have been a 16th century Bavarian botanist called Leonhart Fuchs, in a book called De historia stirpium commentarii insignes, or Notable commentaries on the history of plants. But Fuchs (after whom, apparently, the fuchsia is named), had made a big effort to try to match up “modern” plants with those mentioned by classical authors, and may have made a mistake in deciding that lupulo was derived from, and identical with, Pliny’s lupus salictarius. At least one writer has suggested that the word lupulo, far from being derived from the earlier term, may simply be an Italian error for “l’upulo“, via the French for hop, houblon, and nothing to do with lupus salictarius. 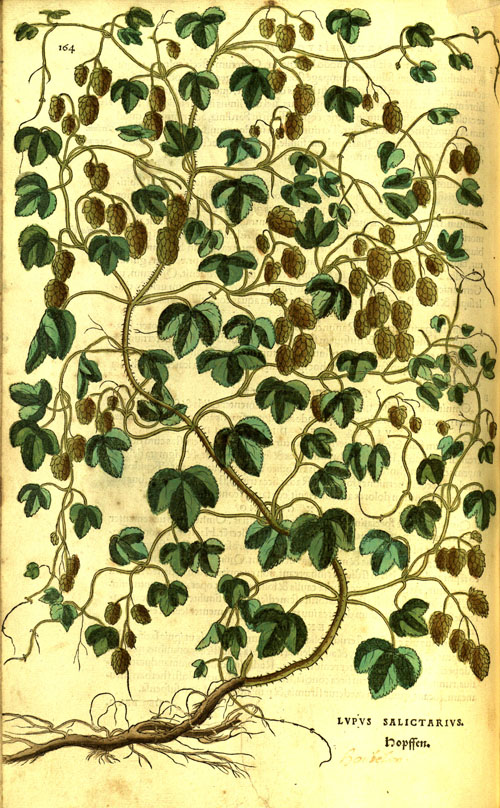 A lot has been made of Pliny’s mention of lupus salictarius, some of it reasonable, and some of quite a stretch. “Never let the truth get in the way of a good story,” observed Mark Twain. But this one is a bit trickier than some. It’s certainly seems possible that Pliny was talking about wild hops, and for all one knows just as likely as unlikely. It’s one of those things that you want to be true, though of course wishing for something doesn’t make it so. We may never know. Cornell concludes his article with his opinion on the matter:

I think it’s somewhere between possible and probable that lupus salictarius WAS the wild hop plant: Pliny puts it among other wild plants from which the fresh shoots were harvested for cooking, like asparagus, and hop shoots are still cooked today, while “willow wolf” is a good description of what hops are capable of in the wild as they grow up trees for support. But that’s a long way from “definite”, and to write as if Pliny’s lupus salictarius was unequivocally the hop plant is wrong.

When the great Swedish botanist Carl von Linné attached a scientific name to the hop in 1753 he gave it the genus name Humulus, from the Swedish for “hop”, humle, and the species name lupulus from the medieval Latin word for “hop”. Even if lupus salictarius WERE the origin of lupulus, therefore, it would be wrong to say, as many websites do, that Pliny “is credited with inventing the botanical name for hops.” He didn’t: Linnaeus did.

It looks like this, and many other great Strange Tales of Ale will be contained in Martyn’s latest book, which will be published in a few weeks, on September 19, 2015. Pre-order a copy on Amazon before you forget.

Luckily, true or not true, the beer Pliny the Elder tastes just as good. But on the anniversary of Pliny’s death at Pompeii, it seems as good a day as any to pour of bottle of hoppy beer. Vive la Pliny. 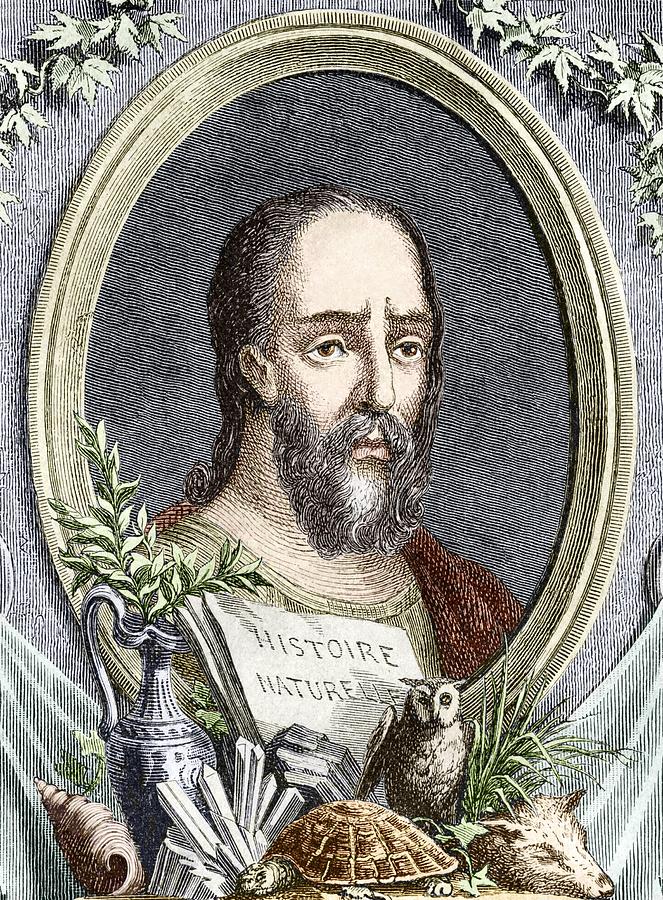