When Tom Dalldorf and I came up with the idea for Beerapalooza six years ago, our original vision was a week-long series of events celebrating all the wonderful beer here in the Bay Area, California. Unfortunately, there was just two of us, and we could never quite find the time to pull it together in a way that matched our imagination of what it should have been. Beerapalooza became static, with essentially five annual events—which were all great fun—but that was it. It started off with the Bistro’s Double IPA Festival and finished up with the annual Celebrator Anniversary Party. In between there was the cheese tasting at Rogue’s San Francisco Public House, the Beer Chef’s Beer & Chocolate Dinner and the legendary Toronado Barleywine Festival.

Then earlier this year, Philly Beer Week blew our socks off. What Tom Peters and Don Russell were able to pull off their first year was nothing short of amazing. We were envious and a little guilty that we hadn’t managed to put the same effort into to a similarly grand event here in the Bay Area. We returned from Philadelphia re-energized and committed to pulling it together.

So five of us involved in one capacity or another in the beer world formed an ad hoc committee to organize and promote the successor to Beerapalooza, which we’ve dubbed “SF Beer Week,” which will be held over ten days next year, February 6-15, 2009.

Philly Beer Week characterized their town as being “America’s Best Beer Drinking City.” Since we’re friends with the Philadelphia beer community — hell, I’m originally from Pennsylvania, having grown up just a hour west of Philly — we thought we’d have a little fun with an East Coast/West Coast smackdown and so we’re calling the Bay Area “America’s Original Craft-Beer Drinking City.” Not only are we having a bit of fun with the faux rivalry, but we think we have a pretty good claim to that title. With both Anchor Brewing and New Albion in the Bay Area, not to mention Sierra Nevada and Mendocino Brewing (started with New Albion’s eqiupment), and the fact that three of the first five brewpubs were located in the Bay Area, we feel confident of our claim to that title.

The plan is to showcase the legacy and heritage of beer in the Bay, with a goal of coordinating 100-150 events. The week will be anchored by the Bistro Double IPA Festival, the Toronado Barleywine Festival and will end with a new full-blown Bay Area Beer Festival. In between there will be beer dinners, cheese and beer pairing events, other gourmet food events savoring our world-class cuisine, meet the brewer evenings, homebrewing demonstrations, music, films and even a museum exhibition exploring the history of Bay Area brewing, from Monterey to Sacramento and beyond.

A new website went live over the weekend, in conjunction with handing out postcards announcing SF Beer Week at the Slow Food Nation convention. There’s not much there yet, but you can sign up to receive a newsletter to follow along as we add information over the coming months leading up to the 10-day celebration. Instead of just a few people doing a lot of work on SF Beer Week, we’re enlisting the help of as much of the beer community that’s willing and interested in helping. In that way, our goal is to create an event that’s not just for beer enthusiasts, but by them as well. We also hope to get the support of the wider community in the form of recognition by the City or cities and possibly the state along with support from local tourism boards.

If you’re interested in volunteering or getting involved with SF Beer Week by hosting an event, please contact us via Email. Either way, watch the SF Beer Week website or here for news about the event’s progress. And most importantly, consider showing your support for Bay Area beer by attending as many of the events as your liver and wallet will allow. There should truly be something for everyone, whether you live in northern California or have chosen SF Beer Week as the perfect time to visit us. 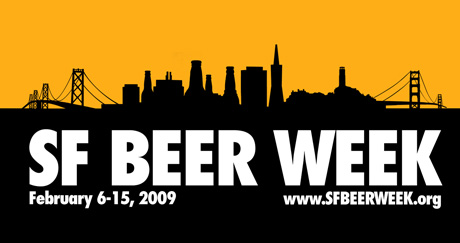