A few days ago, I wrote that in my mind, Alcohol Justice, as much as any prohibitionist group, had achieved the status of a cult, given their by-any-means-necessary tactics and casual relationship with the truth. Today presented a perfect example of that, in which they took another “study” and bent it and remolded it into the shape they wanted it to be in order to advance their agenda. This morning they tweeted the following: 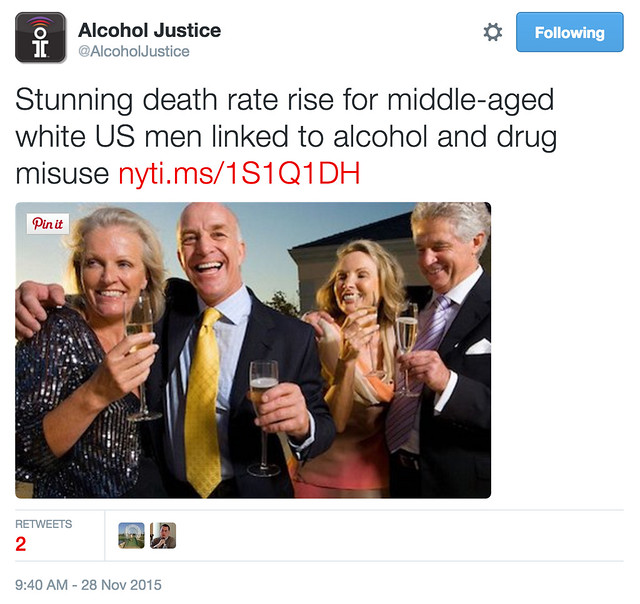 And there’s certainly some scary claims in that tweet. “Stunning death rate rise for middle-aged white US men,” which is apparently linked to “alcohol” and also “drug misuse.” Or is that misuse of both drugs and alcohol? It could be read either way, and since you rarely here “alcohol misuse” as a term — it’s almost always “alcohol abuse” — I suspect that it was chosen on purpose to give the impression that it was simply drinking alcohol that leads to this “stunning death rate.” But what does the actual “study” claim? The tweet includes a link, which takes you to an article from November 2 in the New York Times, Death Rates Rising for Middle-Aged White Americans, Study Finds. But that title is similarly misleading, because once you actually read it, you’ll discover that it’s not all middle-age white men whose risk is increasing, but a specific subgroup within that cohort. That group is increasing overall, but only because the steepest rise is almost entirely coming from less educated men in that group.

I guess that’s statistically significant, but it’s an increase of 0.134%, which doesn’t sound as bad as they’re making it out to be. Later in the article, they say that “[i]n that group, death rates rose by 22 percent while they actually fell for those with a college education.” Of course, I don’t have a Nobel Prize in Economics, as one of the people who conducted the study does, which the article makes a particular point of pointing out. Despite those honors, they’re as flummoxed by the results as apparently everyone else who’s found it’s such a growing problem for “the declining health and fortunes of poorly educated American whites.” adding. “In middle age, they are dying at such a high rate that they are increasing the death rate for the entire group of middle-aged white Americans” and this has been “puzzling demographers in recent years.” Seriously? Let me take a stab at it. The middle class has been eroding for decades, real wages have been stagnating almost as long, people are losing their pension plans, unions are under attack and our government has been co-opted by business interests who have been doing everything possible to keep tax breaks for the wealthy, allow our elections to won by whoever has the most money, and generally make life miserable for every worker below the executive level, the people in the 90%. And which group would you expect that to most affect? I would suggest it’s people in the lower paying jobs, the ones requiring less education, which would go a long way toward explaining why these are the same people drinking themselves into an early grave.

They do finally make some mention of this, but apparently don’t think it was significant enough to “fully account for the effect,” when they earlier cited that middle-aged white men with only a high school diploma have “a more pessimistic outlook among whites about their financial futures.” But doesn’t it seem like one of those “well, duh” moments?

The least educated also had the most financial distress, Dr. Meara and Dr. Skinner noted in their commentary. In the period examined by Dr. Deaton and Dr. Case, the inflation-adjusted income for households headed by a high school graduate fell by 19 percent.

But that can’t be it, they seem to conclude. That wouldn’t cause them to become depressed, which might lead them to drink excessively or take more drugs, is what they’re saying. Why do we continue to go out of our way to insist that the alcohol or drugs, in and of themselves, are the problem, but not the underlying problem or problems that make people reach for them? Remember, the message from Alcohol Justice was that “alcohol and drug misuse” were the link to a “Stunning death rate rise for middle-aged white US men,” but that’s not what the study found, or is even the focus of the article, despite the fact that misleading headline could make you think that was the case, if you didn’t bother to read it. What this study of metadata from the CDC found was that there’s an increase for such men with less education and who abused alcohol, which is very different from what AJ is peddling. And this spin is doubly reinforced by the photo they chose to use with the tweet. It shows two older couples, well-dressed and sipping on champagne. That’s practically the polar opposite of the image one would expect for which group is showing an increase in their risk of death found by the study they’re referring to. And it’s the photo you see first, before you read either the tweet or click on the article. Before you have any facts whatsoever, you’re confronted by this misleading image of well-heeled bubbly revelers. 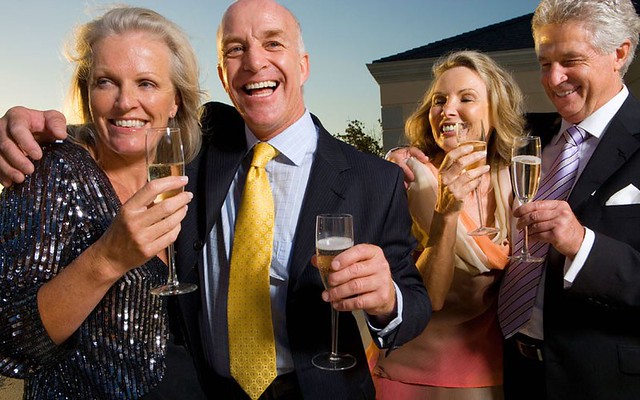 But that image holds another secret, and one Alcohol Justice probably doesn’t want you to know about, especially as they’ve started tweeting for donations at this, the giving time of the year. The image is actually taken from an article in the British newspaper, the Telegraph, from early September of this year. That piece, entitled Drinkers ‘subsidising’ non-drinkers by £6.5 billion a year, flies right in the face of one of AJ’s most-cherished propaganda lies, the idea of alcohol harm, that people drinking are a drain on the economy, forcing teetotalers to pay for their excesses and strain public resources. It’s one of AJ’s most common arguments for raising taxes on alcohol, under the notion of a “charge for harm” that they’re so fond of insisting. But the subtitle of the Telegraph article is: “A drain on taxpayers? Drinkers pay their dues three times over, new study claims.”

Far from being a financial burden on taxpayers, people who enjoy alcohol pay the cost of dealing with drink-related social problems almost three times over in tax every year, the analysis by the Institute of Economic Affairs, the free-market think-tank, argues.

The paper calculates that the NHS, police, the criminal justice and welfare systems in England collectively spend £3.9 billion a year dealing with the fallout from excessive alcohol consumption.

But that figure is eclipsed by the £10.4 billion a year it says the Treasury gains in alcohol duty in England.
It argues that taxes on drink could be halved and still leave the Government firmly in profit.

Christopher Snowdon, author of the report, said: “It is time to stop pretending that drinkers are a burden on taxpayers.

“Drinkers are taxpayers and they pay billions of pounds more than they cost the NHS, police service and welfare system combined.

“The economic evidence is very clear on this – 40 per cent of the EU’s entire alcohol tax bill is paid by drinkers in Britain and, as this new research shows, teetotallers in England are being subsidised by drinkers to the tune of at least six and a half billion pounds a year.”

So that’s where the photo came from that Alcohol Justice used to accompany a misleading tweet about misstated statistics, linking to a somewhat misleadingly titled article. And this is from the organization that claims to be the “industry watchdog,” forcing me to ask, yet again, who’s watching the watchdog? Because left to their own devices, they obviously aren’t terribly concerned with honesty or truthiness. And that makes it increasingly difficult to have any meaningful discussions with them about alcohol policy or indeed believe anything they say or claim.