Today, of course, is the Vernal Equinox, the first day of Spring for those of us on the northern side of the equator, and the beginning of Autumn for our southerly brethren. It’s also a day when we have roughly equal amounts of day and night.

People around the world have celebrated the equinox for millennia in an amazing array of ways. Back in the early days of Lagunitas Brewing, their celebration manifested itself, as you’d expect, in a beer they called Equinox. Launched originally in 1995, it quietly went away in the early 2000s, when they were working both day and night and it probably seemed like stopping to mark the middle of that made no sense. But this year, on the Equinox, they decided to bring back Lagunitas Equinox, though in a slightly altered package and recipe. It’s still a “pale oat ale,” but it’s a bit stronger now, at 8.4% abv (it was 6.4% before). It’s also again in 22 oz. bottles and kegs. 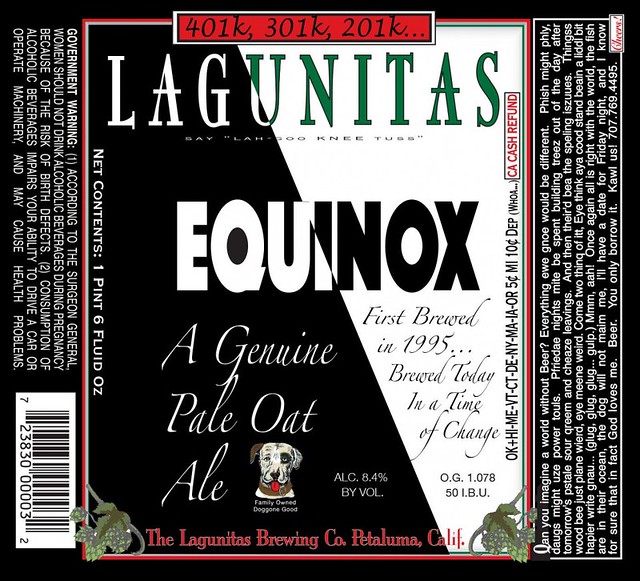 Lagunitas describes the beer as “a creamy, pale oat ale hopped up with a huge charge of Equinox and Simcoe hops for a piney, eucalyptusy, cedary, sprucey, foresty blast.” And Tony’s label notes make for some challenging reading.

Qan you imagine a world without Beer? Everything ewe gnoe would be different. Phish might phly, aaugs might uze power touls. Pfriedae nights mite be spent building treez out of the day after tomorrow’s pstale sour greem and cheaze leavings. And then theirft bea the speling iszuues. Thingss wood bee just plane wierd, eye meene weird. Come two thing of Itt, Eye think aya cool stand begin a kid bit hapier write gnaw… (glug, glug, glug… gulp.) Mmm, aaht Once again all Is right with the world, the fish are in their ocean, the dog will not maim me, I’ll have a date for Friday night, and I know for sure that in fact God loves me. Beer. You only borrow it. Kawl us!

They also created a pretty trippy one-minute video showing a split-screen journey of the beer during both day and night simultaneously.