You are here: Home / Uncategorized / The Personality Of Pint Glasses

The Walkabout pub chain, consisting of fifty Australian-themed bars in Great Britain, hired psychologist Dr. Glenn Wilson to research the drinking habits of their patrons. While I’d never heard of him (hardly a measure of fame), he’s apparently “best known for his work on attitude and personality measurement, sexual attraction, deviation and dysfunction, partner compatibility, and psychology applied to performing arts. In 2001, Wilson was ranked among the 10 most frequently cited British psychologists in scientific journals.”

For the project, Wilson observed 500 people drinking in a pub, and specifically the way they held their glass, and from that “divided them into eight personality types.” Despite his apparent credentials and success in his field, the study hardly seems scientific. It was done at the behest of a pub chain, most likely to create publicity, which it’s no doubt dones as it’s been covered by the BBC, the Daily Mail and the Telegraph.

Dr Wilson said: “The simple act of holding a drink displays a lot more about us than we realise – or might want to divulge.

“When Hillary Clinton was on the campaign trail in the US, commentators picked up on the fact that she used her left hand to raise a pint, even though she’s right-handed.

“She might just have been posing for a shot but some people suggested that it was an insincere gesture.

“The next time you’re in a bar, it might be worth thinking about what you’re saying to the people around you just by the way you’re holding your glass.”

So it’s a little silly, and not exactly well-settled, peer-reviewed, tested science despite being done by a psychologist of good repute. Still, it’s not without interest. Below are the eight personality types and how each are described. 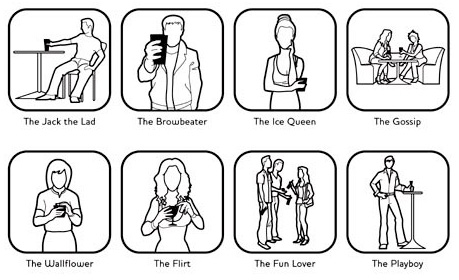 1. The Jack the Lad: This “peacock” is conscious of his image and will drink a bottled beer, or cider. Inclined to be confident and arrogant, he can be territorial in his gestures, spreading himself over as much space as possible, for example, pushing the glass well away from himself and leaning back in his chair. If he’s drinking with his mates, he would be unlikely to welcome approaches from outside the group, unless sycophantic and ego-enhancing.

2. The Browbeater: This rather pugnacious type is again mostly male. He prefers large glasses, or bottles, which he uses as symbolic weapons, firmly grasped, and gesticulating in a threatening, “in the face” kind of way. Something of a know-it-all, he comes across as slightly hostile, even if only through verbal argument, or jokes targeted at others. He should be approached with great care, or not at all.

3. The Ice Queen: This is a mainly female type whose natural style is cold and defensive. She drinks from a wine glass, or a short glass, which is held firmly in a barrier position across the body so as to deter intimate approaches. It is usually a waste of time approaching this woman; she may be ready with a castrating put-down.

4. The Gossip: This (mainly female) drinker tends to cluster in all-female groups talking about other people, and can be critical. She holds a wine glass by the bowl and uses it to gesticulate and make points in conversation. She is inclined to lean over her drink, in towards others so as to speak confidentially. This person already has a close-knit social group with little inclination to extend it, therefore advances from outsiders are not usually welcome.

5. The Wallflower: This is a shy, submissive individual who holds the glass protectively, not letting go, as though afraid somebody will take it away. Palms are kept hidden and the glass is used as a social crutch – the drink is never quite finished, with a mouthful left in case of emergency. The drink is small (maybe half a pint of lager for a man). It may be drunk through a straw, which is fidgeted with, and used to stir the drink between sips. The style and pace of drinking is an echo of those around them (very little is initiated). This individual needs to be approached in a gentle, sensitive way, with perhaps a few understated compliments to build self-confidence, but may eventually warm to overtures.

6. The Flirt: Usually a woman, who holds her glass with dainty, splayed fingers and uses it in a provocative way. She may position it over her cleavage so as to draw attention to her attributes or peer over the rim to make eye contact when taking a sip. She may “tease” the rim of the glass with her finger, perhaps dipping it into the drink and sucking it dry. Assuming her agenda is appealing, the best way to approach is with reciprocal flirtatious gestures.

7. The Fun Lover: This type of drinker may be a man or a woman, who drinks to be sociable and values togetherness. A convivial individual, he / she enjoys being with their friends, and likes a laugh. Swigs taken from bottled drinks are short, so they don’t miss out on chipping in with the conversation. The bottle is held loosely at its shoulder for ease. This type of person is always happy to extend their social circle. The best way to approach them therefore is to leap directly into light, good-humoured conversation and make them laugh.

8. The Playboy: This man is the active, self-confident, Don Juan-type seducer. He uses his (usually long) glass or bottle as a phallic prop, playing with it suggestively. He is inclined to be possessive, and can be tactile with his female companions.