I tend to be skeptical of anyone who claims to be able to shorten the brewing process, especially by up to nine times, since brewing is a pretty time-honored process, improved little by little over the centuries. And generally speaking, speeding up fermentation has rarely resulted in better beer. Of course, there was that flourish of decades beginning with the industrial revolution that speeded up that process considerably, but since then things have slowed down to a more manageable pace. But that’s exactly what got the winners of this year’s Y-Prize, from the University of Pennsylvania, the grand prize $10,000, “for developing a process that speeds up the fermentation process in beer production by up to nine times — while maintaining alcohol quality and composition.”

The three winners, Alexander David, Shashwata Narain and Siddharth Shah, are students in the Wharton School and the School of Engineering and Applied Science. They’ll received “$10,000 and the rights to commercialize the technology through their company,” which they’ve named “Fermento.” 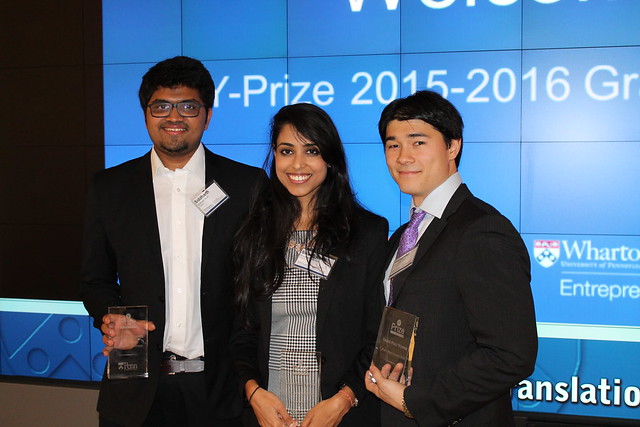 The Fermento team selected microfluidic fabrication technology developed by Assistant Professor of Bioengineering David Issadore as the basis of their application.

The alcohol in beer is the product of yeast, which metabolically converts sugar found in barley and other grains into ethanol. This fermentation process typically occur in large batch reactors, where a concoction of boiled and strained grain liquid, known as wort, is left mixed with a carefully controlled amount of yeast.

This stage is one of the major bottlenecks of beer production. It can take up to three weeks, as maintaining the correct amount of yeast is a delicate balance.

“There is only a certain amount of yeast cells one can directly add to a batch reactor,” Narain says, “because overpopulation causes physiological stress on the yeast cells, which in turn reduces reaction rate. It takes time for yeast cells to grow and reach a critical mass to produce enough beer. Moreover, the concentration of sugar available to yeast cells is limited because in a large batch solutions, yeast cells don’t consistently interact with sugar molecules.”

Capable of delivering precisely controlled amounts of liquids to exact locations in a conveyer-belt fashion, microfluidics present a possible solution to both of these challenges. Yeast and wort can be introduced to one another in microdroplets, providing the optimal ratio for fermentation each time.

“Microdroplets to speed up fermentation have been tried in labs, but none of the technologies so far are scalable,” Narain says. “This patented technology actually makes the process industrially scalable for the first time, and in a financially feasible manner.”

So who knows. According to another report, “[t]heir advisors include executives from some of the biggest brewers in the world: MillerCoors, Anheuser-Busch InBev, Biocon India and Heineken. And say what you will about them, but those beer companies employ brewers who know how to make beer. So there may be something to it. It will be interesting to see what becomes of the idea.