You are here: Home / Beers / USDA Dietary Guidelines Under Fire Again From Prohibitionists

Every five years, the U.S. Department of Agriculture, or USDA, in conjunction with the Department of Health and Human Services, or HHS, updates its quinquennial Dietary Guidelines. They’re described as providing “authoritative advice for Americans ages 2 and older about consuming fewer calories, making informed food choices, and being physically active to attain and maintain a healthy weight, reduce risk of chronic disease, and promote overall health.” Since the last guidelines were published in 2010, it’s time for the new ones, and they’ve been proposed and are are now open for comments before being finalized.

In the 2010 Guidelines, a change was made to the structure of the recommended amounts of alcohol people should consume, if they’re going to enjoy drinking alcohol and are, of course, of legal age. At the time, the government took the radical view, to prohibitionists, that:

I may not agree with some of the characterizations in the last sentence, but it does serve to demonstrate how conservative the guidelines are, and that they’re not cavalierly telling people to start drinking. Plus, unlike some anti-alcohol groups, I’m not trying to willfully mislead people about what they say. They also have a handy chart of key definitions. 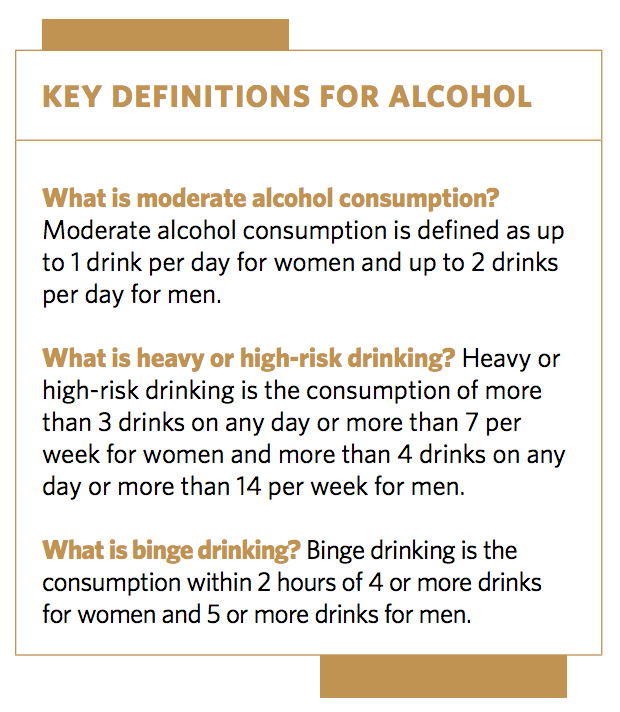 The new Dietary Guidelines for Americans, for 2015, are now going through the comment period, and once again the prohibitionists are apoplectic. Alcohol Justice, for example, whines that the government “proposes a risky and harmful shift in its definition of moderate drinking, and promotes drinking as a healthy dietary behavior. It suggests that a two-to-threefold increase in daily consumption limits is safe, and that questionable claims of health benefits outweigh known, substantiated risks of alcohol consumption. The Report represents a significant departure from previous Dietary Guidelines, and does so without sufficient scientific basis to justify such a shift.”

So how honest is that statement? Let’s take a look. First, what is the “risky and harmful shift in its definition of moderate drinking” from 2010 to 2015? The “new” language is on Page 105 of 107, constituting the proposed guidelines for 2015.

And here’s the old language below. Notice the difference? No? That’s because there really isn’t any. There are a few of the words that are different, numbers replaced by the word written out, some different punctuation, but that’s about it. The meaning is entirely the same.

There is no shift. If anything, this version of the guidelines merely confirms changes made to the 2010 Guidelines. “Regarding alcohol, the Committee confirmed several conclusions of the 2010 DGAC, including that moderate alcohol intake can be a component of a healthy dietary pattern, and that if alcohol is consumed, it should be consumed in moderation and only by adults. However, it is not recommended that anyone begin drinking or drink more frequently on the basis of potential health benefits.”

AJ says the “Dietary Guidelines should recommend ways to reduce and prevent alcohol-related harm, not increase it,” but of course that’s not at all what they say. That’s just more whining because they don’t like what the USDA is proposing. They didn’t like it five years ago, and they don’t like it now. They go on to claim that with “current and growing evidence regarding risk of disease and harm from drinking even low levels of alcohol, the Dietary Guidelines should include recommendations for Americans to drink less alcohol – not more.” Of course, that’s another misleading statement. They can, and often do, cite single studies that say what they want, but as detailed in Studies Show Studies Don’t Show Much, most are not worth the paper they’re printed on, but they keep hammering on them because it makes for effective propaganda, especially in the school of “if you repeat a lie often enough ….”

AJ further believes that the proposed guidelines say “that a two-to-threefold increase in daily consumption limits is safe.” But this mythical increase is just that, a fantasy. The 2010 guidelines said the same thing. There’s no proposed increase, just a confirmation of the last version. And guess what happened with the 2010 change? Nothing, that’s what. The country did not fall to ruin from people suddenly drinking too much because they believe the guidelines told people they should, or could.

As alcohol is a unique aspect of the diet, the DGAC considered evidence from several sources to inform recommendations. As noted above, moderate alcohol intake among adults was identified as a component of a healthy dietary pattern associated with some health outcomes, which reaffirms conclusions related to moderate alcohol consumption by the 2010 DGAC.

No matter how you slice it, there is nothing new regarding the alcohol guidelines in the proposed dietary guidelines for 2015. But to hear Alcohol Justice tell it, this is “a radical change,” despite being almost exactly the same as five years ago. This is their action plan for the faithful sheep that follow them, [with my rebuttal in brackets]:

Without providing any explanation or evidence for a radical change [they do explain the reasons, citing that there’s evidence supporting their decision], the Dietary Guidelines Advisory Committee proposes to increase limits used to define “moderate” drinking. [No, they don’t. All they do is confirm the changes made five years ago.]

The current (2010) U.S. Dietary Guidelines define moderate drinking as up to 1 drink per day for women and up to 2 drinks per day for men (daily limits) [that’s not all they say, they also cite the weekly allowances]. In contrast, the proposed change would base these 1/2 limits on average rather than daily consumption and suggests it is safe for women to drink up to 3 drinks in a day and men up to 4 drinks in a day so long as the averages are not exceeded [exactly as they did in 2010]. This effectively triples (the daily limit for women and doubles (the daily limit for men). [Not this time, it doesn’t.]

Since most adult drinkers in the U.S. don’t drink every day, the proposed change effectively encourages consumption right up to binge drinking levels, thus increasing health risk. [That identifies the problem with the definition of binge drinking, as I’ve written about numerous times. That’s the problem here, not encouraging people to drink moderately. After all, if they did, they might live longer. We wouldn’t want people to know that, would we?]

Binge drinking (4 or more drinks per occasion for women; 5 or more drinks per occasion for men) causes more than half of all alcohol related deaths each year in the U.S., and impairment and increased risk begin below those levels. The proposed changes are, therefore, dangerous for public health. [Again, that’s a problem with the definition of bingeing, which used to be more vague, making it hard to quantify. So it’s been narrowed over the years, and made easier to quantify, bringing more and more people into the specter of binge drinkers, artificially inflating statistics about its dangers.]

There are no randomized studies showing any health benefits from any level of alcohol consumption as well as no evidence that moderate drinking promotes a healthy lifestyle. [Poppycock. They’re hanging their hat here, one presumes, on “randomized” studies, but it’s unlikely even that’s true. The USDA itself in 2010, looked at meta-analysis of a wide range of studies, concluding just the opposite of AJ’s position. But AJ keeps ignoring that “evidence” because they don’t like it. It’s easier to just keep saying what they want to be true.]

It’s hard to know what to make of so dishonest a piece of propaganda as this is, raising unfounded fears, not to mention being littered with just out and out misinformation. It’s one thing to be in favor of promoting “evidence-based public health policies and organiz[ing] campaigns with diverse communities and youth against the alcohol industry’s harmful practices” but quite another to watch how that plays out in reality. “Evidence-based” seems to really mean anything they agree with and “the alcohol industry’s harmful practices” includes literally every single thing we do. I wish that was hyperbole, but I’ve never seen any action taken by an alcohol company that AJ didn’t find fault with, from donating cans of water to Haiti after the devastating earthquake there to their “‘charge-for-harm’ approach, which is based on the assumption that anyone who drinks deserves to be punished.” And another similar group stated at a 2013 conference that “they simply didn’t care about the public health impacts of taxes. They were in the game solely to get some of the tax revenue steered toward their organization.”

This is getting seriously out of hand. as anti-alcohol groups get bolder and more obviously prohibitionist, their divisiveness makes any meaningful discussion increasingly impossible. And unlike these prohibitionists, most people I know in the beer world, and the real world for that matter, recognize that while moderate drinking of alcohol is a good thing for a majority of adults, it’s not for everybody. Some people can’t handle it, and they often ruin it for the rest of us. Because those are the people that anti-alcohol folks always use to represent everyone who drinks, ignoring that they’re minority and that most of us can have a few drinks and not plunge the world into turmoil. But as long as they keep painting us as all the same, they’ll never be able to admit anything but an absolutist view of drinking, no matter how ridiculous that is, and no matter how ridiculous it makes them seem. When you start accusing the conservative USDA of ignoring science and encouraging people to start drinking, you’ve definitely jumped the shark.