Allied Market Research, an international research company with seven offices around the world, has started selling their latest report, the World Beer Market – Opportunities and Forecasts, 2014 – 2020. If you want to buy the report it will set you back anywhere from $4,515 to $10,680, for a global user. While here at the Bulletin we’re not sufficiently well-heeled to buy our own copy, there is some information revealed to entice potential buyers on the report’s website.

For example, this chart gives several data points from the report. 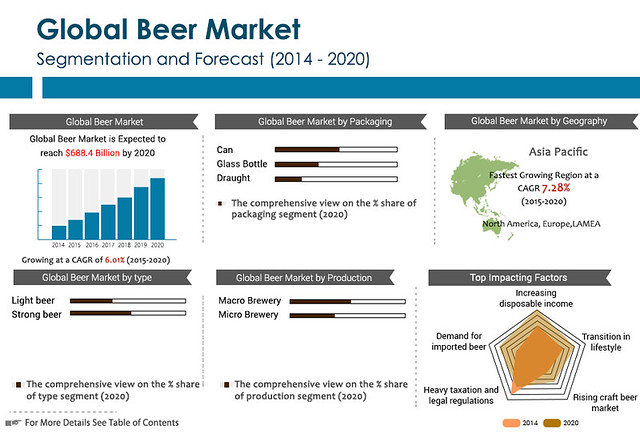 And here’s the “Report Overview:”

Beer is a yeast – fermented alcoholic drink prepared from malt, and flavored by adding hops. Popular in Neolithic Europe, its production dates backs to as far as 2050 BC. By, 7th century AD the alcoholic drink was being produced and marketed by several monasteries in Europe. This drink is majorly brewed from ingredients such as yeast, water, hops and malted barley, although many fermentable carbohydrate sources or natural additives may be included. Likewise, fermentable carbohydrates like wheat, rice and maize are added to produce different styles as well as flavors. Beer style categorizes this alcoholic beverage by factors including flavor, production technique, ingredients, color, and origin etc., of which ale and lager are the two commercially popular types. Ales use top fermenting yeast at a room temperature, on the contrary lagers are made with bottom – fermenting yeast below 10 Celsius. The global beer market is expected to generate about $688.4 billion in sales by 2020. Besides this, the aforementioned industry is likely to register a CAGR of 6 percent during the forecast period 2015 to 2020. A significant increase in the consumption volume is believed to fuel the market growth in developing regions.

Worldwide, sales is following an upward trend. Many brands are now experiencing tremendous success due to a sudden rise in the disposable income and changing lifestyle. Exploiting a niche segment, matured markets are also witnessing a dramatic shift in the high calorie beer market and have developed a taste for low –calorie brew. Likewise, continuous popularity of craft brew has paved a path for a new generation of producers. It is phenomenon, that right from their debut to their annual sales the strong and light brews occupy majority of the market share in the beer industry. Alternatives to glass such as PET, makers are using durable yet ductile, affordable and sustainable packaging solutions like cans or draught. Consumption statistics also disclose a rapid growth in the number of female drinkers.

World’s largest brands have uncorked and positioned their wide portfolio of strong and light brew in the domestic and international market, which now occupies a major chunk of the total business. The market for strong brew is expected to garner about $464 billion in sales by 2020. Besides this, the strong industry is likely to register a CAGR of 6.5 percent during the period 2015 to 2020. Many developed countries have been biased to stronger brew, a liking that has become highly accentuated with the brand image associated with such drinks. In the West, taste and refinement are the prime factors for drinkers. Thus many prefer strong brews due to their high alcoholic content. In close completion are the light brews that have low calorie count and other nutritional contents. Light brew have exploited the desire of the health conscious drinkers to stay healthy.

Breweries are categorized into macro-breweries and micro-breweries based on the production volume or size. Officially the war between them is on, with craft brew companies increasing their production capability. Macro breweries are offering quality and quantity across greater distances. At the same time microbreweries are benefitting too. Likewise, emergence of breweries in less saturated locales worldwide too is a welcome news. Recent changes in drinking preferences have considerably increased the demand for micro-breweries, which is anticipated to register a CAGR of 9.3 percent during the period of 2015 to 2020. Larger number of discerning consumers are shifting to locally produced drinks, enabling the ale industry to revive. So, with varieties of flavor as well as alcohol content, microbreweries are increasing today because distributors spotted a huge demand and took risk on imports of major microbrew brands.

Better sales of even the more expensive premium, super premium and draught have shrugged off all doubts about the dip in the consumption volume. Consumers today are increasingly desirous to experiment with locally produced premium and international varieties. Many brewers now recognize that the premium brews industry would stay the most attractive new segment. Some brewers have just hyped their portfolio as premium in many countries because they are international. Producers are putting greater focus on how they should brand these premium labels. Premunization, is significant and an innovation, that aims at targeting the high–spending customers including highly trendy brews for tier -1 mavericks. The premium industry is anticipated to register a CAGR of 6.4 percent during the period of 2015 to 2020, when compared to the super premium and normal brew segment. Besides this, the super-premium brews are observing a rapid growth in the business and would grow three folds. Few major consumer behavior pattern have also given the super-premium sales a push. The grocery outlets today make up a major part of alcohol sales in terms of value. This presents a greater opportunity for the super – premium brews to grow via channel expansion. Moreover, the normal brews occupy a largest division of about 43 percent of the total industry.

The packaging plays a vital role when it comes to influencing the customer buying pattern. Available in bottles, cans or draught these drinks are delivered with care and consideration. In line with the growing sales of brews like ales, new and flavored drinks in bottles are making waves. However with acceleration, canned brew are giving an intense competition to their bottled and draught peers. Likewise, cans are becoming more and more famous and idiosyncrasy in it contributes to the shift in the buying pattern or attitude. There is a rising demand for canned that can be easily stored as well as transported. Further, what makes canned the first choice is the fact that it protect the content from external heat. Alongside this, range of already –established draught brews are continuing to expand in the competitive business environment.

Over the 300 years that ale existed in North America, customer demands has constantly pushed the segment forward with rapid and steady growth. Next, introduction to the craft brewing technique created immense opportunity and a greater population responded to it with further support. Similarly, Europe also has an emerging market for hop lovers. Region’s relaxed brewing mandates have stabilized the consumption volume, which fell significantly in the past two years. Emerging economies are also becoming significantly important to the major international brands, as sales in some matured region still lags. Increased sales in Latin America and Asia has empowered producers to economize out complete sales growth. The Asia – Pacific market is expected to garner about $202.4 billion in sales by 2020. Besides this, the market is expected to register a CAGR of 7.3 percent during the period 2015 – 2020.

To acquire a major chunk of the market, brew producers are seen expanding their distribution channels even for their less popular breeds. Merger and acquisition, rumors have hovered over the brew sector for years, with many domestic and international brewers considering tie – up at some point, inescapable. Likewise, multinational producers continue to make huge investments to grow their reach and trump up collaboration with domestic operators, to help consumers keen in exploring the local and international varieties buy them. To tap demand for expensive brews, a product segment where companies have more rivals brands decide to compete directly and launch new products.

And here’s a short “Analyst’s Review:”

The Global Beer Market would witness a steady growth in the coming years. Europe accounts for the highest revenue generating region in the global beer market followed by Asia-Pacific and North America. The growth in the North American and European region would be at a moderate pace in the future due to increasing health consciousness and legal regulations in the region. However, there has been a significant increase in the demand of beer in the developing countries of Asia-Pacific region. International brewing companies like SABMiller, Heineken have introduced especially brewed beer for the Asian market catering to the distinct taste buds of the consumers. The global beer market is primarily driven by the increasing disposable incomes and changing lifestyles. The growing adoption of craft beer and the rising number of restaurants and bars would further accelerate the growth of the beer market.

Conventionally, the male population has been the major consumer segment. However, with evolving cultural changes and modernization, there has been a significant rise in the count of females drinking beer. Women in the age group of 21 to 30 consume more beer than other age groups. Women generally prefer light beer with low alcohol content. Many vendors in the market are focusing on drinks especially made for women to increase their customer base and serve a wider audience. There has also been a rise in the adoption of craft beer as consumers want to explore different beer flavors. Craft beers include traditional brewing methods with exotic ingredients which add distinct flavor to the beer. Craft beer is widely adopted in the European and North American countries while Asian countries are still in the growing phase. Growing health consciousness, heavy taxation, and legal regulation limit the growth of the market. Stiff competition from substitutes including wine and other spirits also restrict its adoption.

You can buy the full report https://www.alliedmarketresearch.com/beer-markethere, and if you want to share it with me, I wouldn’t say no.