You are here: Home / Beers / Zion, Illinois: City To God, Destroyer Of Beer

Here’s a curious bit of history, centering in the Illinois town of Zion, which was founded today in 1901, and a year before on July 14, 1900, is essentially when the history of the town begins. Here’s their history from the Zion Historical Society:

After the organization of the Christian Catholic Church in Zion [in 1896], [founder John Alexander Dowie] dreamed of a city where his congregation would be free from the evils of the world, a city where God would be the ruler. He first looked for land south of Chicago in the Blue Island area, but the land was not suitable so he looked north of the city. In the fall of 1899, Dowie visited the land north of Waukegan and envisioned what he would come to name “Zion City”. After successfully securing options on approximately 6,600 acres of land, he unveiled his plan for Zion City at the Watchnight Service the eve of the New Year 1900. It would be a city where his congregation could worship, work, and play free from the temptations of the world. Zion City was the only city, besides Washington D.C., that had plans completed before the first spade of dirt was turned. There would be places of employment – he imported a lace mill from England — schools, and recreational facilities, all controlled by John A. Dowie. The land would be leased to the people, with definite restrictions, for 1,100 years. Dowie reasoned that Christ’s return was to be within 100 years and then the millennium, after which there would be no need for leases.

The people would share in the profits of the industries in Zion City and the profits, tithes, and offerings would be sufficient for the support of the Christian Catholic Church in Zion.

On July 14, 1900, hundreds of people came to what would be Zion City for an all day affair which culminated in the dedication of the City to God. The next year was spent surveying the city, laying out all the lots, planning for the utilities, and preparing for the opening of the City to the people. July 15, 1901 was the date that the City lots were made available to the public. The first house was built shortly thereafter in August, 1901. Dowie and his family came to Zion City from Chicago in July, 1902 and moved into Shiloh House, his newly constructed home.

Zion City never reached the potential that Dowie dreamed of having suffered financial troubles early on. In September, 1905, Dowie suffered a stroke and never fully regained his strength. While in Jamaica trying to regain his health, Dowie recalled Wilbur Glenn Voliva from Australia to be the Deputy General Overseer giving Voliva full power of attorney. With Voliva’s arrival in Zion City, he became aware of the dire financial condition of the City. He took steps to relieve Dowie by exercising the power of attorney given to him by Dowie. Dowie was asked to quietly resign from his office of General Overseer. Dowie chose not to relinquish control and a court battle ensued. The court ruled that the people could choose the successor and the great majority chose Voliva. Dowie was deposed and spent the last year of his life at Shiloh House surrounded by a small group of loyal followers. He died at Shiloh House in March, 1907, a few months before his 60th birthday. He is buried in Lake Mound Cemetery, Zion, Illinois.

Zion is located in Lake County, in the northeast corner of the state of Illinois, at one point even touching the border to Wisconsin, though most of it lies a bit south of the line separating the states. Zion also appears to be smack dab in the middle between Chicago and the more beer-friendly Milwaukee, also along Lake Michigan.

So the town was created to be a religious sanctuary, a Christian utopia. As these things generally go, it didn’t quite work out that way. Trying to create a place that’s “free from the evils of the world” seems impossible, especially since there’s no universal agreement on what those evils might be. Not surprisingly, however, alcohol was almost certainly among the evils Dowie wanted his town to be free from. And as far as I can tell, there are still no bars in Zion City and the town’s Liquor Control Commission only allows “the sale of alcoholic liquor at retail primarily to the sale in its original package or by restaurants, recreational facilities or hotels,” which seems to suggest no draft and therefore no bars. There are certainly no bars listed in the directory of the Zion businesses, not as a category and not by any obvious names, although they do have at least one chain restaurant that typically includes a bar: Applebee’s.

But Zion also seems to be part of the legacy of Prohibition, too. The National Photo Company Collection, which is in the Library of Congress, has some photos taken in Zion, Illinois sometime during the Prohibition years. The photos were originally taken by the Press Illustrating Service of New York. Surprisingly, they’re not sure exactly when the photos were taken, the Library of Congress believing it was “between 1921 and 1932,” which is a pretty wide range.

As far as I can piece together from the captions in the Library of Congress collection, trucks bound for the more populous and gregarious Chicago, just fifty miles to the south along Lake Michigan, were stopped in pious Zion, and confiscated. The City, apparently under federal authority, took it upon themselves to destroy the beer that they captured from the bootleggers. Maybe it was some kind of vigilante citizens force, determined to keep illegal hooch out of their paradise. Apparently, Zion destroyed around 80,000 sixteen ounce beer bottles. At any rate, all that remains of this story appears to be these three photos. 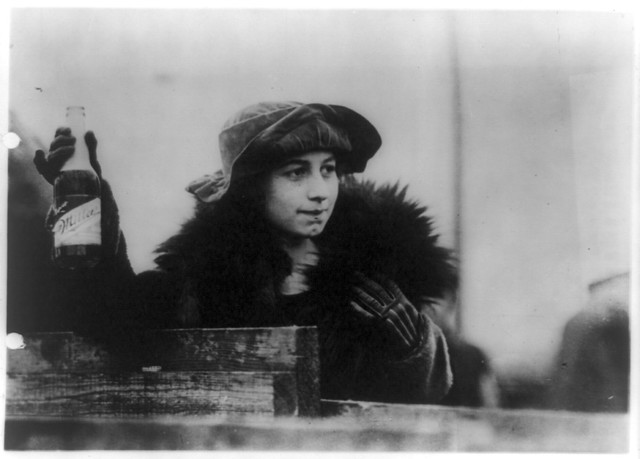 Zion City, Ill., destroys 80,000 pint bottles of beer. Mrs. Graze Knippen of Zion City holding up bottle of beer as she helps get rid of the beer. 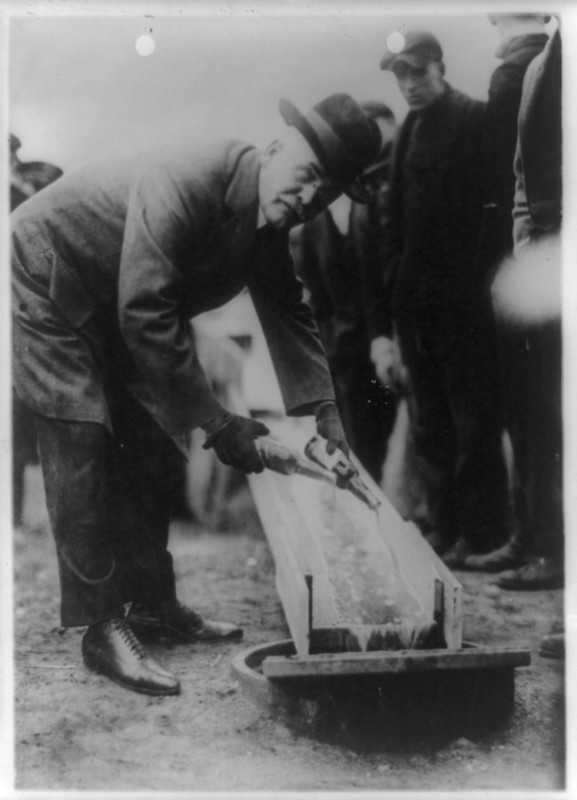 W. Hurd Clendinen, mayor of Zion City, pouring away two bottles of beer. Apparently Clendinen made sure the press was on hand to witness, and photograph, his city’s commitment to the Prohibition movement. 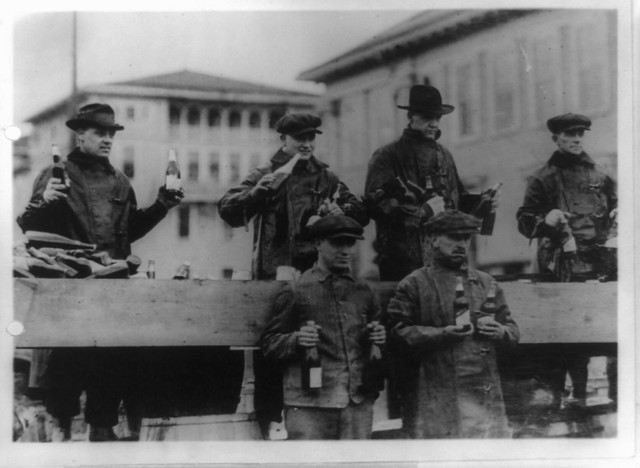 Six men holding bottles of beer from a captured truck. Truck loads of beer enroute to Chicago, which were waylaid and captured at Zion City, Ill. … all bottles were destroyed.