You are here: Home / Beers / Alice Cooper And Chicken And Beer, Oh My!

Today is the birthday of American rock singer and songwriter Alice Cooper (born Vincent Damon Furnier; February 4, 1948- ). Apparently early in Alice Cooper’s career, there was an incident at a 1969 show in Toronto that helped to create his bad boy persona and get him noticed in the world of rock and roll. That became known as the Chicken Incident, and there are different versions of it that have been told, with this one coming from Wikipedia.

Alice Cooper’s “shock rock” reputation apparently developed almost by accident at first. An unrehearsed stage routine involving Cooper, a feather pillow, and a live chicken garnered attention from the press; the band decided to capitalize on the tabloid sensationalism, creating in the process a new subgenre, shock rock. Cooper claims that the infamous “Chicken Incident” at the Toronto Rock and Roll Revival concert in September 1969 was an accident. A chicken somehow made its way onto the stage into the feathers of a feather pillow they would open during Cooper’s performance, and not having any experience around farm animals, Cooper presumed that, because the chicken had wings, it would be able to fly. He picked it up and threw it out over the crowd, expecting it to fly away. The chicken instead plummeted into the first few rows occupied by wheelchair users, who reportedly proceeded to tear the bird to pieces. The next day the incident made the front page of national newspapers, and Zappa phoned Cooper and asked if the story, which reported that he had bitten off the chicken’s head and drunk its blood on stage, was true. Cooper denied the rumor, whereupon Zappa told him, “Well, whatever you do, don’t tell anyone you didn’t do it.”

Blueiskewl also has another account, with some additional context. Stemming from the infamous chicken incident, at some time in the 1970s, Cooper managed to be in the same room as Colonel Sanders — Harland David Sanders — the founder and face of Kentucky Fried Chicken, a connection not lost on Cooper. 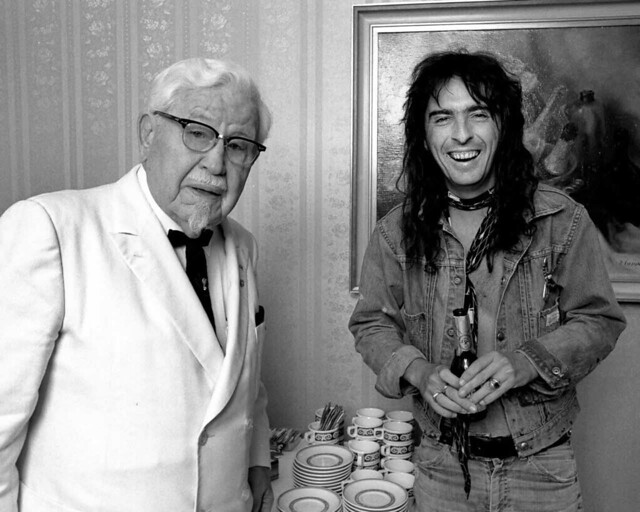 A perplexed Colonel Sanders posing with Alice Cooper, who’s holding a beer, sometime in the 1970s.

During an interview which was taped for a showing of the film Super Duper Alice Cooper in 2014, Cooper answered a question about his meeting Colonel Sanders in the 1970s.

“Here comes this nice old man in a white suit,” said Cooper. “Suddenly I realize that this is the Hannibal Lecter of chickens. I have the death of exactly one chicken on my hands, and this guy has a score of 10 billion. Yet everyone loves this guy, and hates me for being a chicken killer! The irony of the two of us being in the same room at the same time was not lost on either me or the Colonel.”

And in yet another one by Interviewly, he talks about tying the two together.

What can you tell us about meeting Col. Sanders? Did he bring chicken?

There was an INCREDIBLE thing that happened in the early 70’s! Somebody threw a chicken onstage, I threw the chicken in the audience, the audience tore it to pieces, and then in the newspaper the next day the headline read “Alice Cooper tears chicken to pieces.” It’s the most notorious story about Alice Cooper that’s been going on forever. And I thought “it just one chicken and I didn’t even kill it, the audience killed it, so I thought why not take a picture with the mass murderer of chickens Colonel Sanders?” so to me it had a sense of humor to it. I mean, one chicken for me, seven BILLION chickens for Colonel Sanders. And yet I’m the villain. I would say if you interviewed the chickens they would be more terrified of him than me.

Unfortunately, I can find no specifics about exactly when or where this meeting took place. It looks like it was in someone’s house, or maybe a hotel, but no one seems to know for sure. Perhaps it’s better to leave it mysterious and enigmatic. If it weren’t for the photos, we may not believe it every actually happened.

Anyone want to hazard a guess as to what beer it was? 19702 and with a foil neck and probably label. It’s not Michelob and it doesn’t strike me as a Lowenbrau. It might be something more local or regional, but given that we don’t know the location that’s not much help. It doesn’t look like the Colonel joined Cooper for a beer. 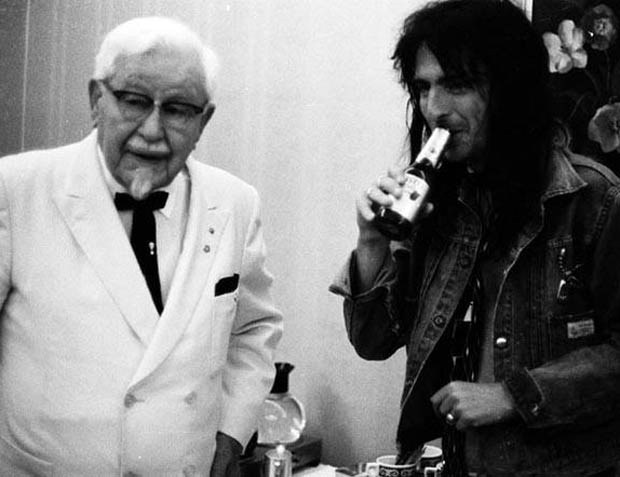