I generally don’t like revealing a new beer coming from a brewery before they’ve officially announced it, preferring to let the brewery manage how that information is made public. But since others have revealed it online, and because it’s pretty big news, I’m breaking my own rule. Anchor Brewery has apparently created a new beer called Double Liberty IPA. 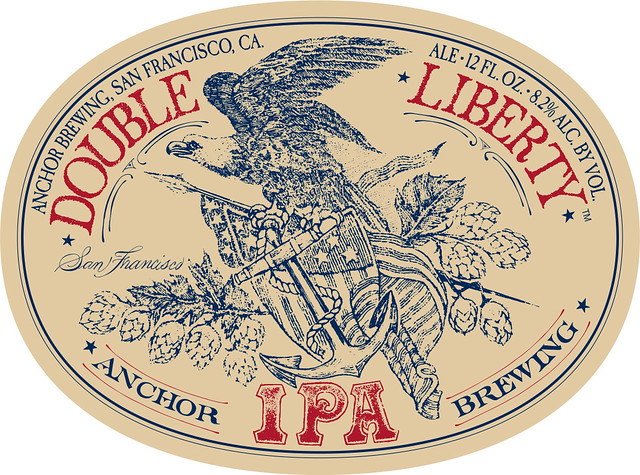 The label has been approved, drawn by their longtime label artist Jim Stitt, although no date has yet been set for its release as far as I know right now. Since they only recently released their new Flying Cloud Stout, I suspect it will be a little while before it’s officially announced. The COLA search also reveals it will be both bottled as well as available in kegs.

According to the neck label, “Double Liberty IPA is made with 2-row pale malt and whole-cone Cascade hops.” It also apparently has “double the hops and double the IBUs.” They describe it as “imparting uniquely complex flavors and dry-hop aroma to this radically traditional IPA.” I love that phrase — “radically traditional.” It also weighs in at 8.2% a.b.v.

I’m sure we’ll learn more details soon. Anchor’s brewmaster Mark Carpenter is speaking to my class at Sonoma State on Wednesday, so hopefully he’ll be able to tell me more then. But frankly, I’m pretty excited to try this new beer. Liberty Ale has long been one of my favorite beers, and is the beer I always order first, each time I visit the brewery’s tap room. So an imperial version of that beer has to be worth trying, especially if Mark had a hand it creating it, as he did with the original Liberty 40 years ago.