You are here: Home / Beers / B Stands For Beer, Which You Drink When You’re Dry

Education has certainly gone through a lot of changes over the centuries. We sometimes forget that our standardized school system only began at the beginning of the industrial revolution, mainly to train people to work in factories, and people quite understandably rebelled against them in the very beginning. They were especially opposed to by farmers, who relied on their children to help work their farms, and that’s the reason that school also takes the summer off, and doesn’t start each fall until after the harvest. Before that time, the rich sent their kids to boarding schools or hired tutors in their mansions or estates. The rest of us were left to fend for ourselves, and most were home-schooled. The resources available at the time were few and the quality of what was available sometimes left a lot to be desired.

One type of educational resource was the chapbook. They were “an early type of popular literature printed in early modern Europe. Produced cheaply, chapbooks were commonly small, paper-covered booklets, usually printed on a single sheet folded into books of 8, 12, 16 and 24 pages. They were often illustrated with crude woodcuts, which sometimes bore no relation to the text. When illustrations were included in chapbooks, they were considered popular prints.

The tradition of chapbooks arose in the 16th century, as soon as printed books became affordable, and rose to its height during the 17th and 18th centuries. Many different kinds of ephemera and popular or folk literature were published as chapbooks, such as almanacs, children’s literature, folk tales, nursery rhymes, pamphlets, poetry, and political and religious tracts.”

They were also used as textbooks and many were produced for that purpose. One such type of chapbook was the alphabet book, and more modern versions are still being produced today. We certainly had lots of them when my children were young and learning to read. Alphabet books were simply books with a page for each letter of the alphabet, usually with one or more pictures of things that were spelled with the letter on the page. If you’ve raised kids, or been around someone who has, you’ve seen one of these. Plus, I’m betting at one time in your life you probably were one; a kid, I mean. But they weren’t always the happy, colorful alphabet books we think of today.

For example, here are pages 6-7 of “The Silver Toy, or Picture Alphabet: for the entertainment and instruction of children in the nursery.” It’s from the Digital Media Repository at Ball State University in Indiana, but you can find it other places, too, such as the University of Washington. It was printed by F. Houlston and Son between 1820-1840, although another source places its date around 1825. 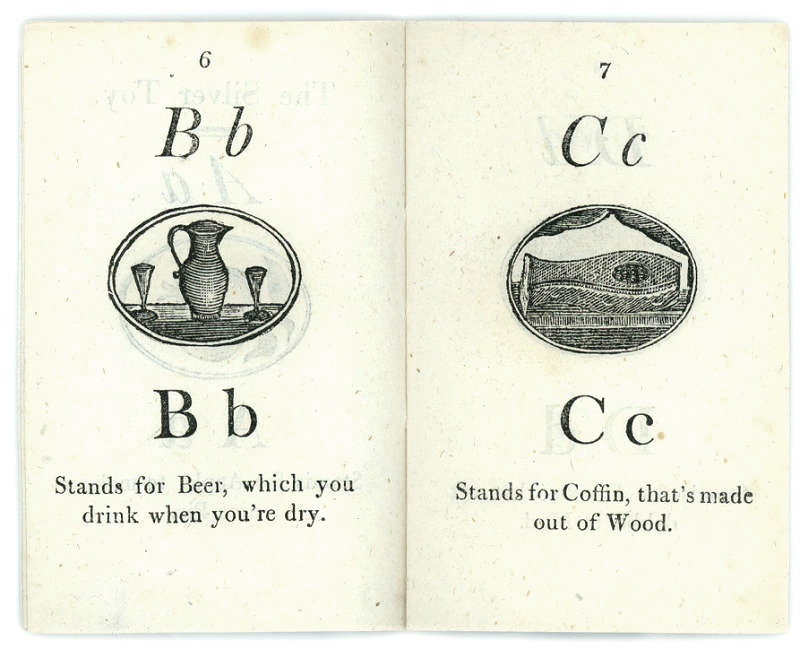 These are the only two pages of inside the chapbook that I could find. I’m as liberal a person as you’re liable to find, and hold quite progressive views on how we should educate youngsters about alcohol, but even I think they could have started out with something simpler, like a ball and a cow, or a bat and a cat, before moving on to beer and coffins to teach those letters. Still, you have to love the way they described beer. “‘B’ Stands for Beer, Which You Drink When You’re Dry.” As true today as it was in 1825.