Thursday’s ad is for Blatz Beer, from 1950. The ad is sort of part of Blatz’s “I lived in Milwaukee, I ought to know” series from the later Forties and Fifties that featured prominent celebrities, sports figures and famous folks from Milwaukee claiming to know “Blatz is Milwaukee’s Finest Beer” because they lived there, or near there, at some point in their lives. This one doesn’t so much feature a person as a radio show, Duffy’s Tavern, a radio sitcom about the misadventures of bartender/bar manager Archie. Archie was played by Ed Gardner, who also wrote and produced the popular show during its ten-year run. Despite the ads showing Gardner in his role as “Archie,” I guess he wasn’t famous enough (maybe since it was radio no one knew what he looked like?). That’s also why it doesn’t use the “I’m from …” of “I’ve been to …” Milwaukee-focused opening line, and instead the show’s fictional bar serves Blatz as their exclusive beer. Also, I’m pleased to announce that this is the last Blatz ad in this series that I’ve found so tomorrow we’ll be returning to random beer ads. 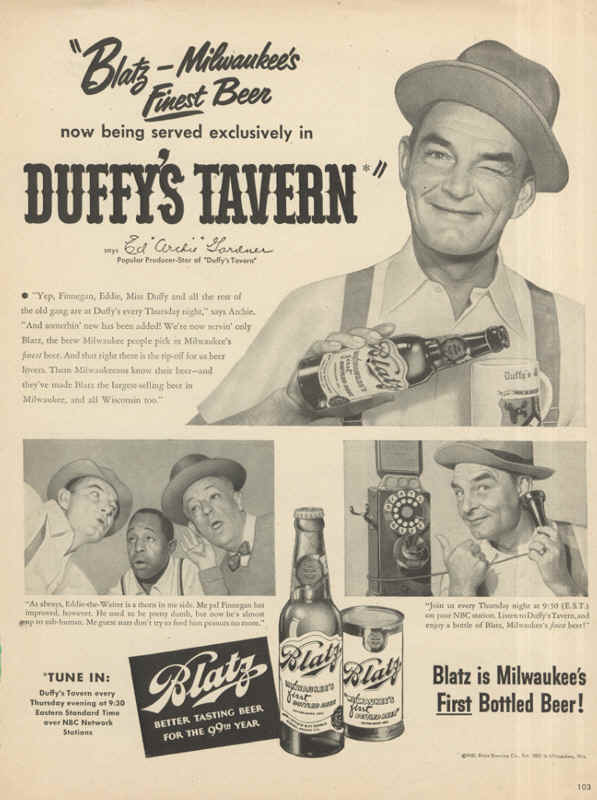