Today is the 67th birthday of Dave Keene. Dave, of course, owns the best beer bar in San Francisco, the Toronado, which has been around for over 30 years. Dave is one of the great figures in the San Francisco beer scene and also one of my favorite Washoe partners, and we’ve had some monumental games and vanquished many fine players — you know who you are! Join me in wishing Dave a very happy birthday. Outside the Toronado for their 20th anniversary, Dave bookended by fellow publicans Don Younger (from the Horse Brass in Portland) and Chris Black (from the Falling Rock in Denver). Dave and Tomme Arthur, from the Lost Abbey, after a night of Washoes during SF Beer Week a few years ago. Dave Keene and me at the Summit Hop Festival held at Drake’s Brewing several years ago. 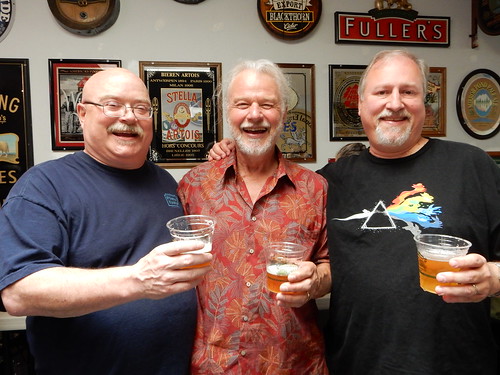 In the back room at the Toronado, Dave, Alec Moss and me, at Alec’s 70th birthday party a few years ago.