Today is the birthday of Jonathan Goldsmith, who “is an American actor. He began his career on the New York stage, then started a career in film and television. He appeared in several TV shows from the 1960s to the 1990s.” And if that were all, he wouldn’t be here, but he’s probably best known now “for appearing in television commercials for Dos Equis beer, from 2006 to 2016, as the character ‘The Most Interesting Man in the World.'” I confess that I’ve never been a fan of the Dos Equis ad campaign and wrote a post against back when it began because I hated the “stay thirsty, my friends” tagline. I probably got more angry comments over the years about my negative reaction than any other post I wrote. And while I’ve never come around on that aspect of the campaign, I do have to admit it’s been very successful. It’s certainly not the first time I’ve been in the minority opinion on something. I briefly met Goldsmith at a comedy event in Napa a few years ago, and he was certainly an interesting person. Despite my protestations, his character has certainly become iconic in the decade Dos Equis ran with it. 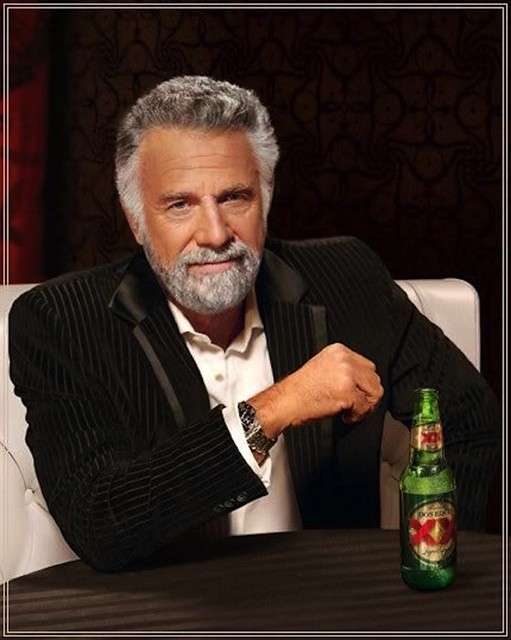 Here’s his biography, from his Wikipedia page:

Goldsmith was born on September 26, 1938, in New York. His mother was a model and his father was a gym teacher. His parents were Jewish. Goldsmith graduated from Boston University in 1958, after which he pursued an acting career.

Jonathan has made over 350 television appearances in his career. Among them was the role of Marvin Palmer in the 1964 Perry Mason episode, “The Case of the Blonde Bonanza.” To advance his acting career, Goldsmith moved to California from New York in 1966.[6] Like many aspiring actors, he found it difficult to gain enough acting work to survive and wound up working various jobs, including driving a garbage truck and working in construction, to help make ends meet.

During his early years in film, Goldsmith performed as “Jonathan Lippe”, having taken the name of his stepfather at the age of six. He subsequently changed his professional name back to his birth name, later recalling, “It always made me feel bad for my father, who never caused me any grief about it…. As my career grew and my son was born, I changed my name back to my real name, Goldsmith, so my father could enjoy his son’s success and have a grandson to carry his name as well.”

Goldsmith first established himself as an actor in Western films, with 25 such appearances. In the 1976 film The Shootist, Goldsmith played a villain who was shot between the eyes by hero John Wayne, who fired blood capsules from a special pellet gun at point blank range into Goldsmith’s face for seven painful takes.

Goldsmith also made guest appearances on 45 television series, including Gunsmoke; Adam-12; Knight Rider; CHiPs; Eight Is Enough; The Rockford Files; Hawaii Five-O; Barnaby Jones; MacGyver; Murder, She Wrote; Charlie’s Angels; Petrocelli; Manimal; The Fall Guy; Dynasty; T.J. Hooker; Hardcastle and McCormick; Magnum, P.I.; Knots Landing; and The A-Team, as well as a few made-for-TV movies. His longest run in a television series was on Dallas, in which he appeared 17 times.

In the 1980s Goldsmith started network marketing businesses (waterless car wash products) Dri Wash & Guard, and also SPRINT which was successful enough to allow him to “retire” from the Hollywood scene; he purchased an estate in the Sierra. He taught theater at Adelphi University in Garden City, New York from 1999-2004. He moved onto a large sailboat moored in Marina del Rey. As of 2011 he and his wife Barbara (who was his agent when he obtained the Dos Equis role) are moving to a house in the area of Manchester, Vermont.

Starting in 2016 Goldsmith writes for True.Ink, a web site that “celebrates The Noble Pursuit, a mix of adventure, expertise, and kindness.”

Beginning in April 2007 and continuing through 2015, Goldsmith had been featured in a high-profile television ad campaign, promoting Dos Equis beer. The campaign, which transformed Goldsmith into “the most interesting man in the world”, has been credited for helping to fuel a 15.4 percent sales increase for the brand in the United States in 2009 and also made him into a very popular meme.

Goldsmith landed the Dos Equis gig by auditioning for the role. Auditioners were given the ending line “…and that’s how I arm wrestled Fidel Castro” and asked to improvise. Goldsmith began his audition by removing one sock and then improvised for 30 minutes before reaching the concluding line. The character was inspired by his deceased sailing partner and friend Fernando Lamas.

On March 9, 2016, Dos Equis announced that it would replace Goldsmith in the role as the “Most Interesting Man in the World”, saying that the brand hoped to “reboot (the character) in a way that’s relevant for today’s drinker so the brand doesn’t get stale.” In September 2016, French actor Augustin Legrand (who also speaks English and Spanish) became the new “Most Interesting Man in the World”.

In June, 2017, he returned to television advertising; he switched to tequila, and does ads for Astral Tequila. 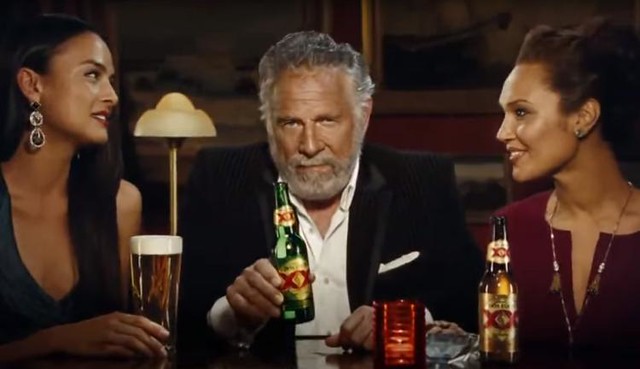 And this is the Wikipedia entry for The Most Interesting Man in the World:

The Most Interesting Man in the World is an advertising campaign for the Dos Equis brand of beer. The ads feature “the world’s most interesting man,” a bearded, debonair gentleman, with voiceovers that are intended to be both humorous and outrageous. The advertisements first began appearing in the United States in 2006 and have since then become a popular Internet meme.

The advertisements first began appearing in the United States in 2006, with The Most Interesting Man in the World portrayed by American actor Jonathan Goldsmith, and Frontline narrator Will Lyman providing voiceovers. They were produced by the marketing firm Euro RSCG (now Havas Worldwide) for Cuauhtémoc Moctezuma Brewery.

Goldsmith landed the Dos Equis gig by auditioning for the role. Auditioners were given the ending line “…and that’s how I arm wrestled Fidel Castro” and asked to improvise. Goldsmith began his audition by removing one sock and then improvised for 30 minutes before reaching the concluding line. The character was inspired by his deceased sailing partner and friend Fernando Lamas.

In March 2016, Dos Equis announced Goldsmith’s retirement from the role, with a commercial sending him on a one-way journey to Mars amid much acclaim, and the narration: “His only regret is not knowing what regret feels like”. In September, they introduced French actor Augustin Legrand as Goldsmith’s replacement

The Goldsmith advertisements feature an older bearded, debonair gentleman. They also feature a montage (mostly in black and white) of daring exploits involving “the most interesting man” when he was younger, in which the character is played by actor Claudio Marangone.

The precise settings are never revealed, but he performs feats such as freeing an angry bear from a painful-looking bear trap, shooting a pool trick shot before an audience (by shooting the cue ball out of the mouth of a man lying on the pool table), catching a marlin while cavorting in a Hemingway-esque scene with a beautiful young woman, winning an arm-wrestling match in a South American setting, surfing a killer wave, and bench pressing two young women, each seated in a chair, in a casino setting. The voiceovers themselves are intended to be both humorous and outrageous, and include humorous undertones such as his giving his own father “the talk”, experiencing an awkward moment just to know how it felt, and finding the Fountain of Youth but not drinking from it, “because he wasn’t thirsty”. Other feats are more centered on his physical abilities and personality. These include his small talk changing foreign policies, parallel-parking a train, and slamming a revolving door.

At the end of the advertisement, the most interesting man, usually shown sitting in a night club or other social setting surrounded by several beautiful young women, says, “I don’t always drink beer. But when I do, I prefer Dos Equis.” Each commercial ends with him stating the signature sign-off: “Stay thirsty, my friends.”

There are secondary advertisements that are similar to the final part of the original advertisements. They feature the man sitting in a social setting, surrounded by beautiful young women, conveying a short opinion to the viewer on certain subjects, such as bar nuts, the two-party system, self-defense, trophy wives, and “bromance”. He then finishes the advertisement by holding a Dos Equis beer and saying, “Stay thirsty, my friends.”

The agency’s rationale for the brand strategy was defined as: “He is a man rich in stories and experiences, much the way the audience hopes to be in the future. Rather than an embodiment of the brand, The Most Interesting Man is a voluntary brand spokesperson: he and Dos Equis share a point of view on life that it should be lived interestingly.” According to the company, U.S. sales increased each year between 2006–2010 and tripled in Canada in 2008, although exact figures were not provided. Sales of Dos Equis are said to have increased by 22% at a time when sale of other imported beer fell 4% in the U.S.

Goldsmith said in an interview that he realized how successful the campaign had been when a man came up to him in a restaurant, telling Goldsmith that the man had asked his young son what he wanted to be when he grew up, and the son replied: “I want to be The Most Interesting Man In The World.” 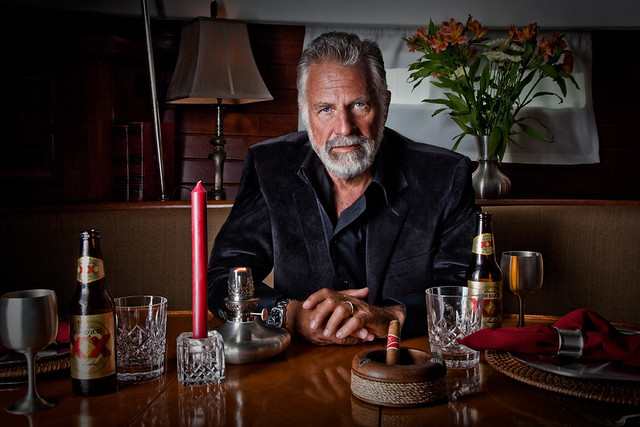 Here’s a fun video from Business Insider about “How Jonathan Goldsmith Became ‘The Most Interesting Man In The World:'”

The ad campaign was successful enough that it also created a popular meme generator to make your own: 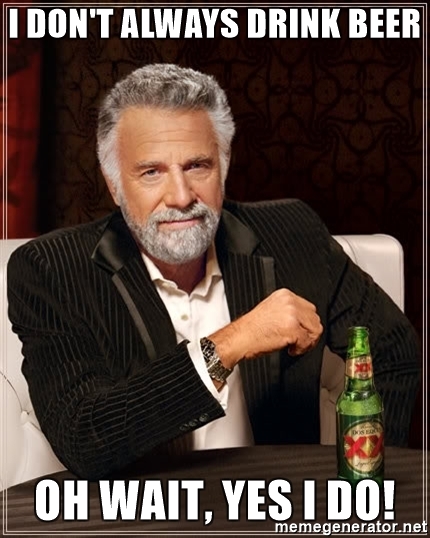