Today the California Craft Brewers Association announced another milestone in California breweries has been reached. There are now 900 breweries in the Golden State, which means that over 9 out of 10 California resident now lives within 10 miles of a brewery.

“The craft beer industry has tripled over the last five years, up from 300 breweries in 2012 to just over 900 breweries in operation today, according to data released by the nonprofit trade association representing the industry, the California Craft Brewers Association (CCBA). California is home to more craft breweries than any state in the nation, with nearly 92 percent of the state’s 39.5 million residents living within 10 miles of a brewery.

’11 percent of the craft brewing industry’s total $67.8 billion economic impact comes from California,’ said Bart Watson, Chief Economist at the Brewers Association. ‘These data highlight the powerful economic impact craft brewers have in California and across the nation.’

According to the CCBA report, the total economic impact of craft breweries in California exceeds $7.3 billion. This figure is derived from the total impact of beer brewed by craft brewers as it moves from breweries to distributors to retailers as well as non-beer merchandise sold at breweries and tasting rooms.

‘The positive impact of craft breweries on the state of California goes far beyond just the benefits of tax revenue, manufacturing jobs and tourism,’ said CCBA executive director, Tom McCormick. ‘Craft breweries also have a tangible influence on the growth and development of their region, investing in their community, employing their neighbors and supporting local nonprofits. Craft breweries are the living room, the town hall and the gathering place for their community.’” 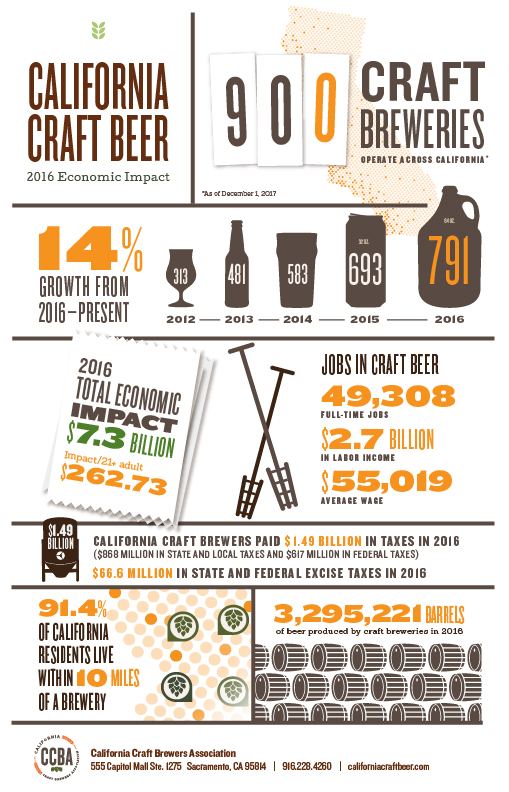