Today is the birthday of John F. Betz (April 8, 1831-January 16, 1908). He was born in Mohringer, Germany and emigrated with his family when he was an infant. His sister Elizabeth married D.G. Yuengling, and he learned brewing there from an early age. When he was 24, he bought a brewery in New York, but moved to Philadelphia in 1867, and bought what was originally the Robert Hare & J. Warren Porter Brewery when it opened in 1775. It was the William Gaul Brewery, but Betz changed it to the John F. Betz Brewery, though after his son joined the business in 1880, it became known as the John F. Betz & Son Brewery. The brewery survived prohibition, but closed for good in 1939. 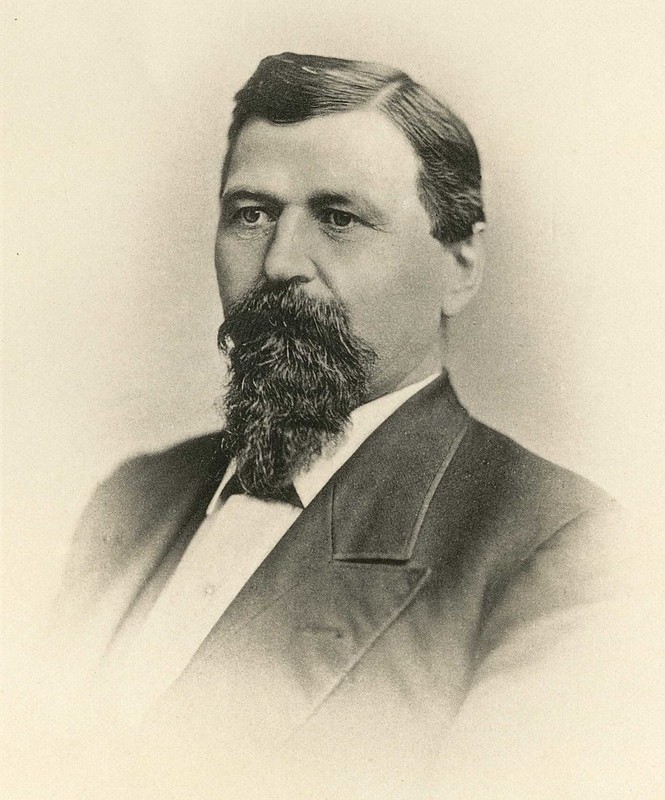 Here’s one account by Rich Wagner on The Beers and Breweries of Philadelphia in Zymurgy from 1991:

John F. Betz came to Philadelphia in 1867 from New York, where he had been brewing for fourteen years. He took a job at the Gaul Brewery until purchasing it in 1880. Prior to Betz’s ownership, only ale and porter were brewed. Betz commenced brewing lager beer as well. John F. Betz became very active in the real estate market in the city. One of his other concerns was a beer garden at Riverside above the Wissahickon Creek on the Schuylkill River. He put in a line of little steamboats to carry his patrons up the river from Fairmount Dam. Betz produced an IPA of 6.5 % a.b.v. and an East India Pale Ale at 7.5% a.b.v. Betz’s half-and-half was a mixture of two-year old ale and stout, and Betz’s Best was a lager that was said to rival Bavarian imports. The Betz brewery reopened after Prohibition and remained in business until 1939. 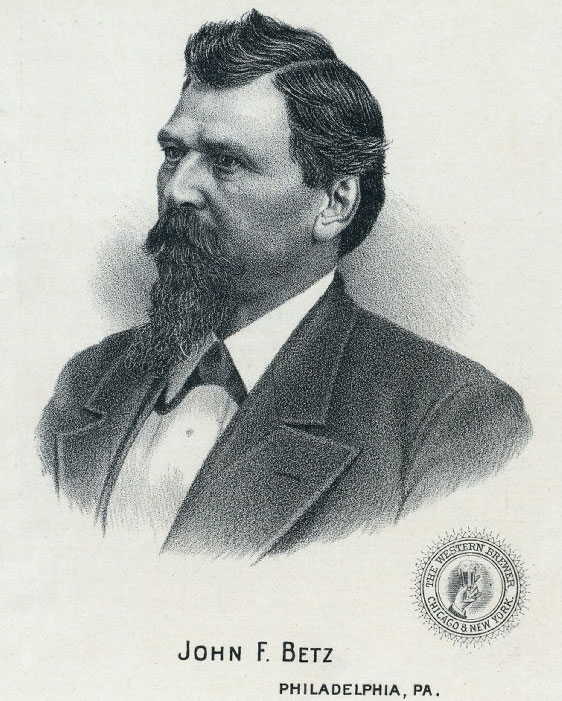 Here’s his biography from Find-a-Grave:

Brewer. He started as an apprentice in a brewery in 1844, and in 1855 he established his own brewery. John F. Betz then came to Philadelphia in 1867, working at the Gaul Brewery. He bought it in 1880. In that same year he built a state of the art brewery. Gaul had only brewed ale and porter; Betz introduced lager beer. He also invested in Philadelphia real estate. His beer garden at Riverside above the Wissahickon Creek on the Schuylkill River was so popular that steamboats brought patrons up the Schuylkill from Fairmount Dam. His contemporaries claimed that Betz’s Best was a lager that rivaled Bavarian imports. His brewery at Fourth and Callowhill Streets was one of the nation’s largest breweries until it closed during Prohibition. The Betz brewery reopened after Prohibition and remained in business until 1939. Though a Lutheran throughout his life, he was made a Chevalier of the Order of St. Gregory by Pope Leo XIII. His first wife was Sybilla Caroline Betz. He was later married to Anna Helene Berroldinger. Before his death he disposed of his property among his wife, two adult sons, and two minor children to avoid the any conflicts over his will. This mention of Betz and his brewery in New York is from “Yuengling: A History of America’s Oldest Brewery,” by Mark A. Noon:

D.G. Yuengling’s son David Jr., who would have been Betz’s nephew, worked at the New York brewery, too. In 1884, the name was changed to the Star Brewery, but it closed for good in 1891.

Betz also started a brewery in Jersey City, New Jersey with Henry Lembeck named The Lembeck and Betz Eagle Brewing Company. “The company was incorporated in May 1890. Since 1869, the brewery grew to become the fourth-largest brewery in New Jersey,” but closed due to prohibition. 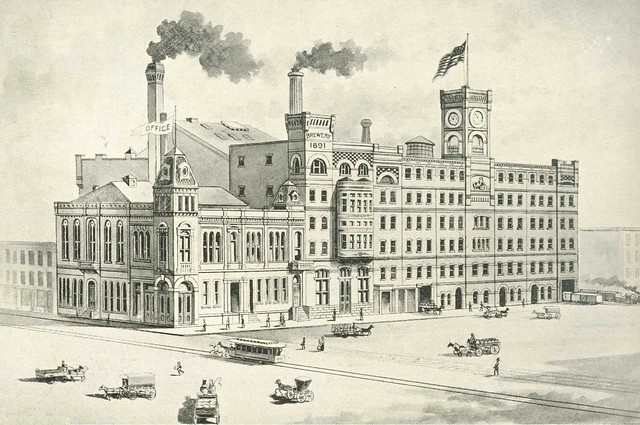 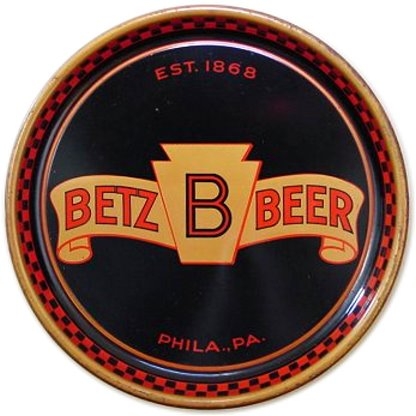 This much longer account is from “Philadelphia and Popular Philadelphians,” published in 1891: 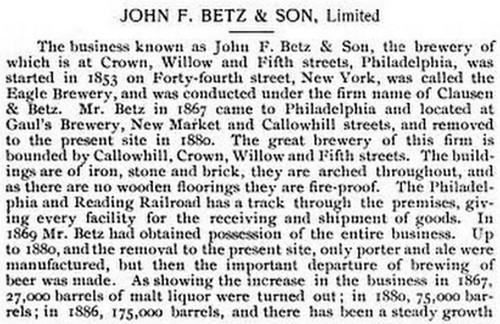 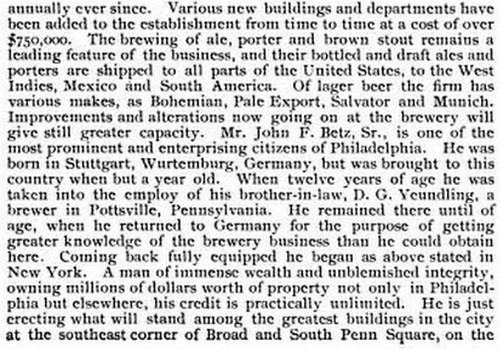 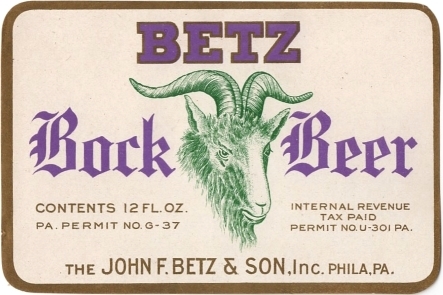 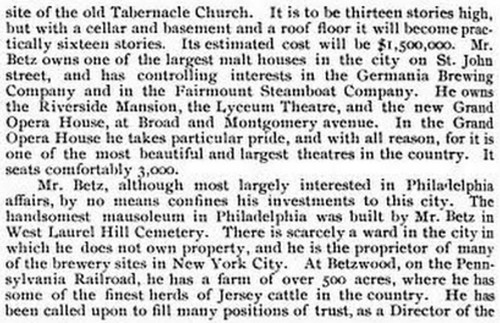 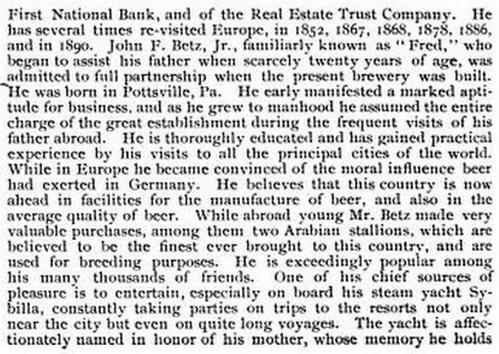 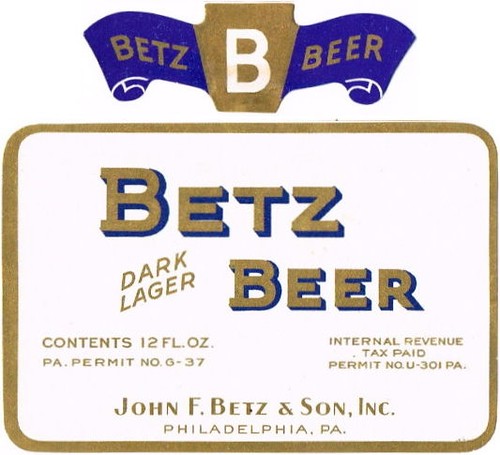 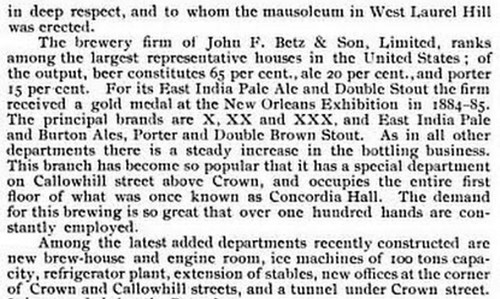 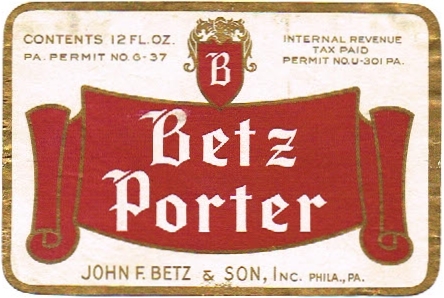 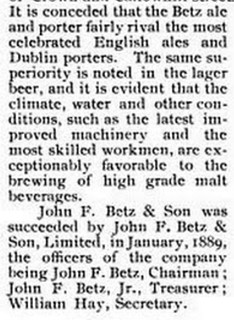 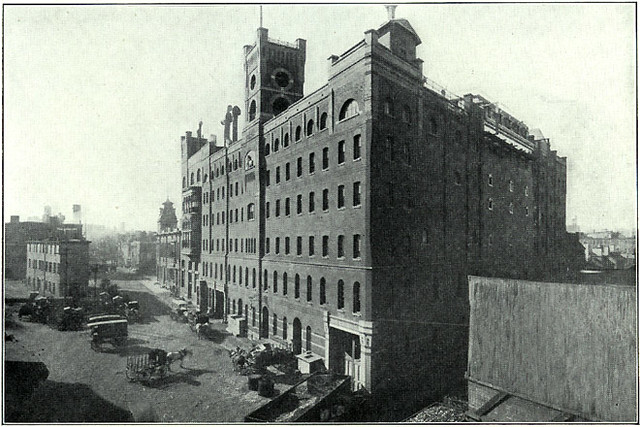 I’m not sure if this was a newspaper advertisement or some very favorable coverage, but this was a page from The Times—Philadelphia on May 28, 1893. 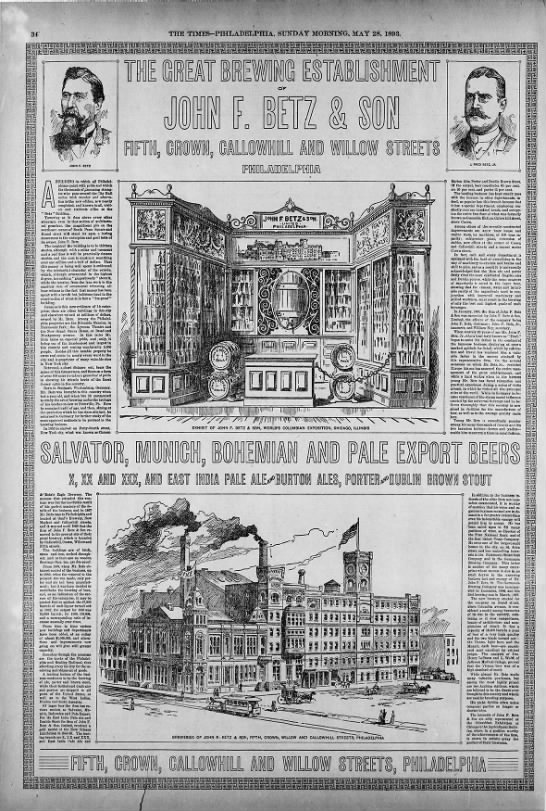