Today is the birthday of John Wieland (October 6, 1829-January 3, 1885). He was born in Baden-Württemberg, Germany, and emigrated to the U.S. when he was twenty, in 1849, eventually settling in the San Francisco area of California. In 1855, he founded (or bought into) the Philadelphia Brewery in San Francisco. After his death in 1885, the name was changed in 1887 to the John Wieland Brewery. In 1890, it became part of a ten-brewery British syndicate, and remained open until prohibition. It reopened in 1934, but closed for good the same year. 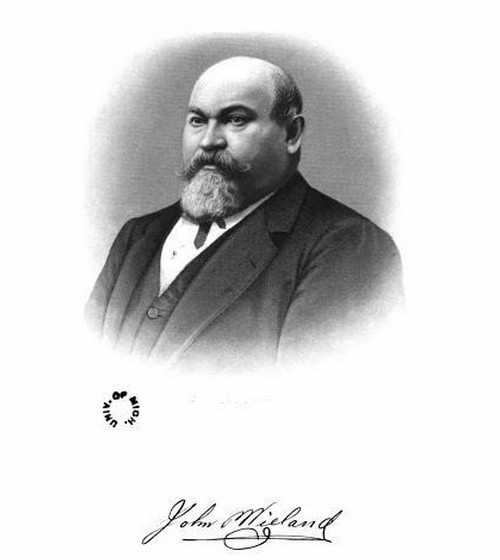 This obituary is from the Daily Alta California, January 3, 1885:

Founder of Philadelpha Brewery, Descended from one of oldest families in Wurtemberg, Germany. His father, John David Wieland was born in Wurtemberg in 1751 and married to Regina Hahn.
John Wieland went to school to age 13 and then worked in the vineyards. On 3/26/1849 he set sail to the United States, landing in New York and going directly to Philadelphia where he was apprenticed as a baker. In 1850, after hearing tales of gold in California, he sailed around Cape Horn on a 165-day voyage and arrived in San Francisco in early 1851. He mined on the South Fork of the Yuba river and Canon creek with great success and purchased a claim on Twist Flat, sold it and then returned to San Francisco as a baker at Union Bakery- later owning it. He married Sophia Fredrica Dorthea Schulthiess (native of Wurtemburg) in November 1853 and had eleven children. (Nine of them were surviving as of 1892). Tragically, on January 3, 1895, he and his 17-year-old daughter, Bertha, were killed in an accident when he brought a candle too close to oil stored in the basement and it exploded. His son Albert was also badly burnt and his son Hermann had severe burns on his right hand. 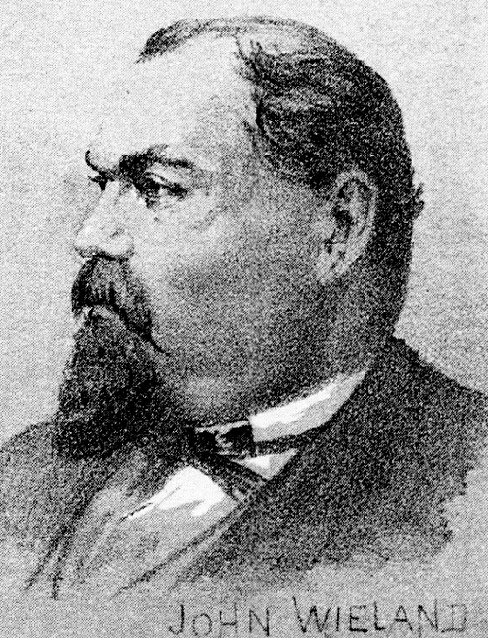 This obituary is from “The Bay of San Francisco,” published in 1892:

JOHN WIELAND, deceased, whose name was so well and favorably known as one of San Francisco’s most progressive business men, was the founder and proprietor of the Philadelphia Brewery, which grew from a small beginning to be one of the leading industries of the city. Mr. Wieland was descended from one of the oldest families of Wurtemberg, Germany. His father, John David Wieland, was born in the home of his ancestors in 1791, and followed the business of a wine grower and also did some farming. During his life he was a gallant soldier, and in recognition of his bravery he was decorated. He married Regina Hahn. Their son, John Wieland, was born October 6, 1829 in Wurtemberg, and attended school until he was thirteen years of age, when he went to Constadt and worked on farms and in vineyards. After seven pears [years] spent in this way he determined to go to American, and March 26, 1849, he bade farewell to his native land and set sail for the New World. After landing in New York he went direct to Philadelphia and apprenticed himself as a baker. In 1850 the stories of the gold discoveries of California reached the East, and he determined to see all that the United States could offer. He sailed from the port of New York on board the ship Botner, went around the Horn, and arrived in San Francisco early in 1851, after a voyage of 165 days. He at once went to work at his trade, but attracted by the gold mining reports he went to the south fork of the Yuba river and mined on Canon creek, meeting with great success. Later he purchased a claim on Twist Flat and continued there until the close of 1851, when the sold out and returned to San Francisco. For two months he was employed at the Union Bakery, and then bought an interest in the business, and in six months was the owner of the whole establishment. The following year he formed a partnership, the firm being known as John Wieland & Co., and this existed until 1855. When this relationship ceased he determined to embark in the business in which he was successful up to the time of his death. He first purchased an interest in the business of August Hoelscher; they were very prosperous, and in 1867 he purchased the interest of his partner, paying therefor the sum of $100,000. He continued to make improvements and to extend his patronage until the establishment became one of the great enterprises in the commerce of the city. 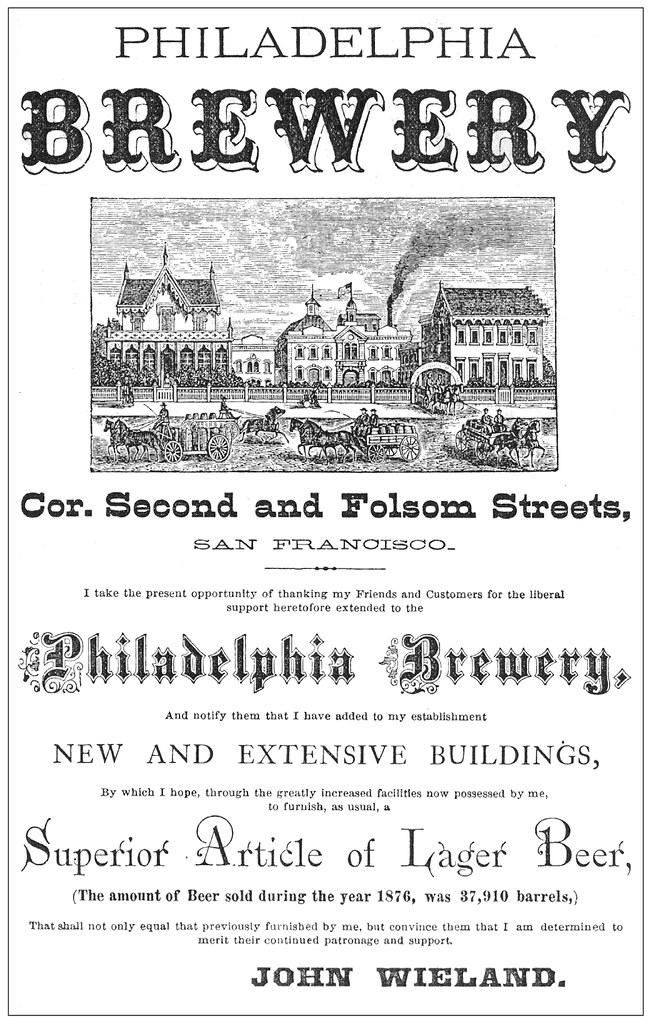 Mr. Wieland was married in November 1853, to Miss Sophia Frederica Dorothea Schulthiess, a native of Wurtemberg, and the union was blessed with eleven children; nine of whom still survive; three of the sons were associated with the father in business and rendered him valuable assistance. Mr. Wieland was a member of the Turn Verein, having joined in 1854; for a short time he was Treasurer of the society; he was a member of the San Francisco Schuetzen Verein. He was frequently urged to allow his name to be used as a candidate for public office, but he steadily declined the honor. Soon after his arrival in Philadelphia he made application for citizenship, and in 1853, in San Francisco, he accepted the obligations imposed upon an adopted citizen of the United States, and has ever been true to his vows. 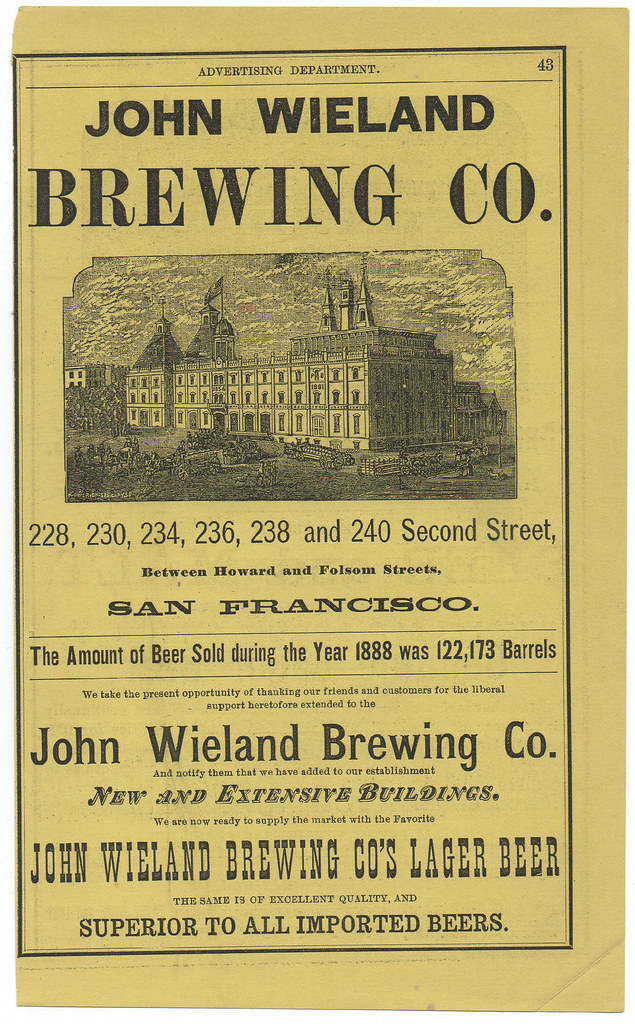 On January 3, 1885, he met with a sad and painful accident, which resulted in his death on the following day. The cause of the disaster was a kerosene explosion, in which his son and daughter were badly burned, and in his efforts to save them he lost his own life. This affliction caused a deep gloom to settle over the city, and many sympathizing friends did all in human power for the bereaved and suffering family. Mr. Wieland was a kind and indulgent father and husband, and a stanch and trusted friend. Mrs. Wieland survived her husband until the year 1891, when she, too, passed to the other life. She was a women of unlimited generosity and of most gracious hospitality. The children are all natives of San Francisco, and are among her most worthy sons and daughters. 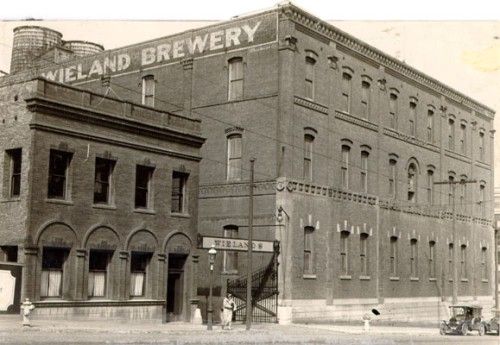 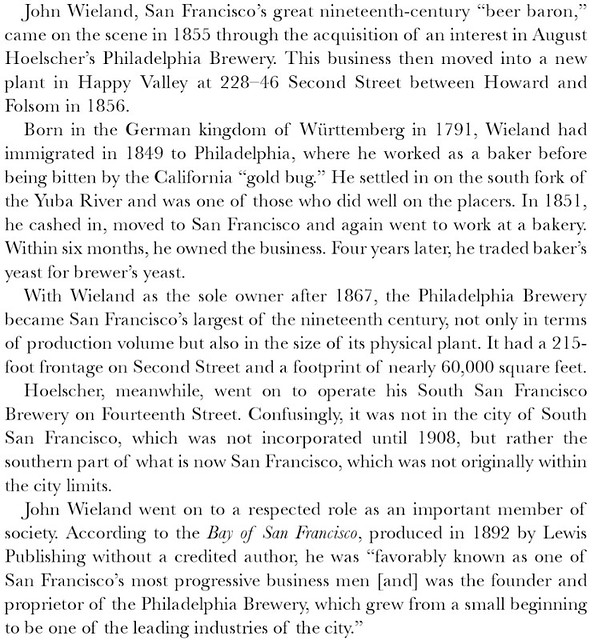 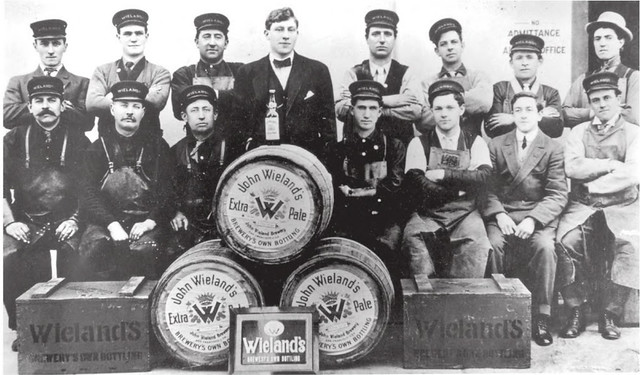 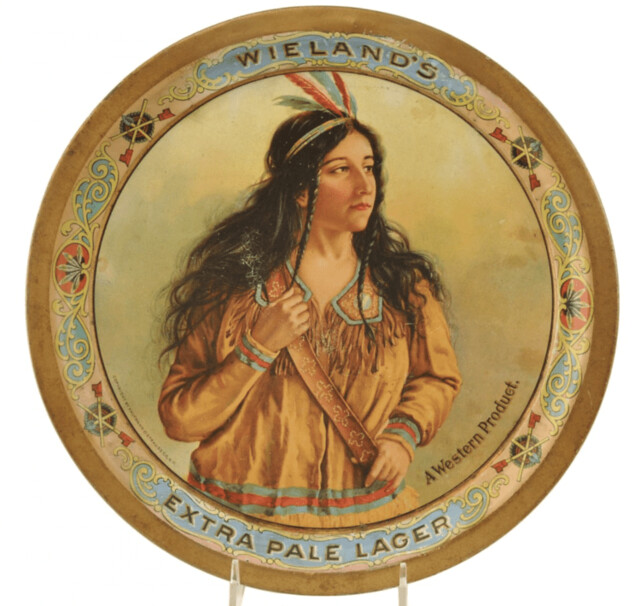 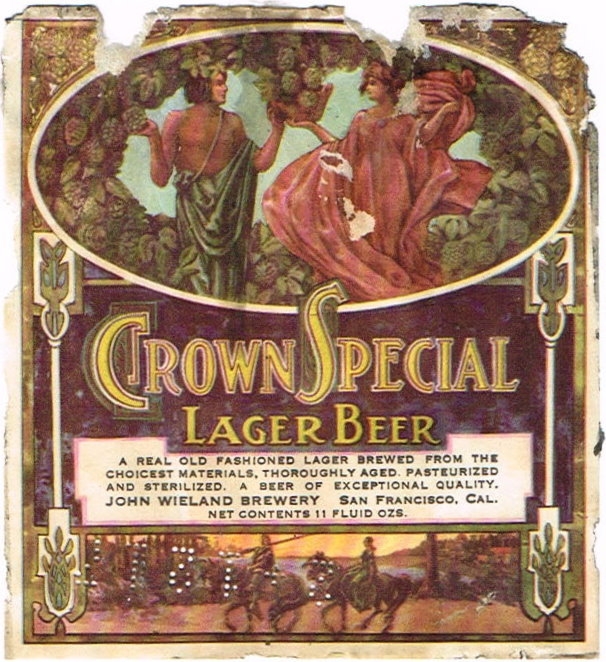