Today is the birthday of Louis Pasteur (December 27, 1822–September 28, 1895). He “was a French chemist and microbiologist renowned for his discoveries of the principles of vaccination, microbial fermentation and pasteurization. He is remembered for his remarkable breakthroughs in the causes and preventions of diseases, and his discoveries have saved countless lives ever since. He reduced mortality from puerperal fever, and created the first vaccines for rabies and anthrax. His medical discoveries provided direct support for the germ theory of disease and its application in clinical medicine. He is best known to the general public for his invention of the technique of treating milk and wine to stop bacterial contamination, a process now called pasteurization. He is regarded as one of the three main founders of bacteriology, together with Ferdinand Cohn and Robert Koch, and is popularly known as the ‘father of microbiology.'” 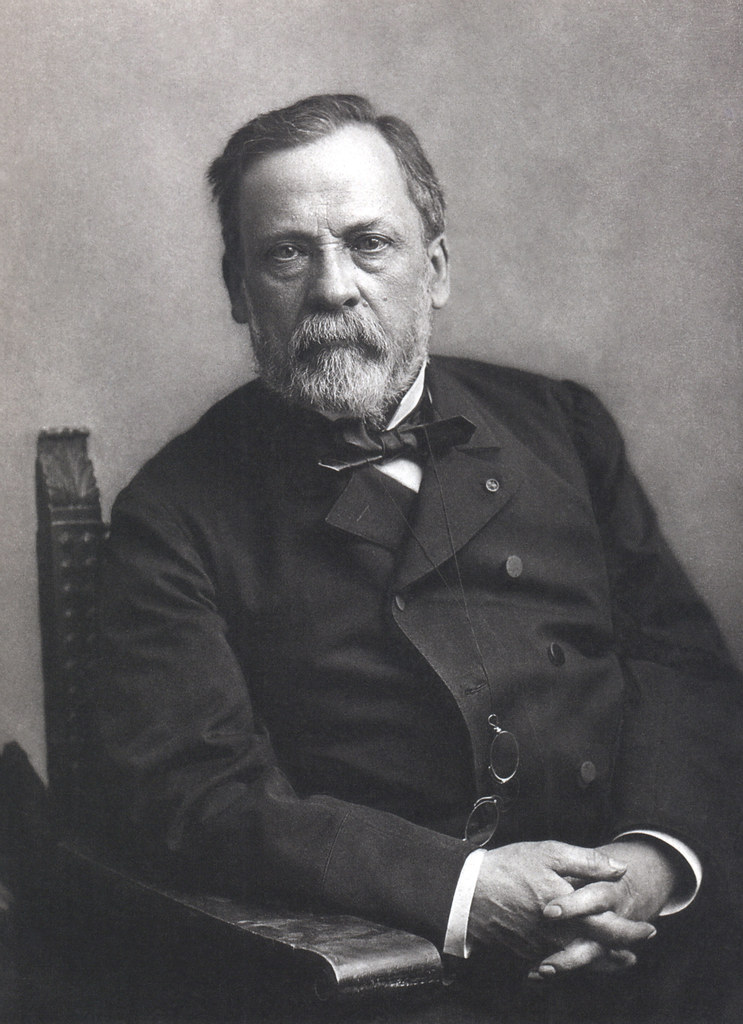 But, of course, for the brewing industry, he’s best remembered for his “Studies on Fermentation,” which he published in 1876.

In 1876, Louis Pasteur published his ground-breaking volume, Études sur la Bière, soon translated into English as Studies On Fermentation. The book changed the course of brewing during the late 19th and early 20th centuries, representing a huge leap forward in the scientific understanding of the processes involved in beermaking. Brewers around the globe put Pasteur’s findings to work in their breweries, and thus plunged the industry headlong into the modern era.

In tribute to Pasteur’s tremendous contributions to brewing science, BeerBooks.com has reprinted Studies On Fermentation exactly as it appeared when first released in English, complete with all of Pasteur’s illustrations. An original 1879 edition was digitally scanned, professionally enhanced and reproduced in a hard cover format.

In his preface, Pasteur modestly wrote, “I need not hazard any prediction concerning the advantages likely to accrue to the brewing industry from the adoption of such a process of brewing as my study of the subject has enabled me to devise, and from an application of the novel facts upon which this process is founded. Time is the best appraiser of scientific work, and I am not unaware that an industrial discovery rarely produces all its fruits in the hands of its first inventor.”

But, of course, the brewing industry recognized almost immediately the impact that Pasteur’s work would have on the art and science of beermaking. Frank Faulkner, the British brewing scholar who performed the English translation, wrote, “Seeing the vast importance of Pasteur’s work from a practical point of view, after writing a review of it for the Brewers’ Journal, I determined to procure, at any rate for the use of my own pupils, a literal translation, illustrated by photo-lithographic copies of the original plates…It was on the completion of this translation that my views and desires expanded. The more I studied the work, the more I was convinced of its immense value to the brewer as affording him an intelligent knowledge of the processes and materials with which he deals…I determined accordingly to publish the work if I could secure the consent of its distinguished author…The debt which we English brewers owe to M[r]. Pasteur can hardly be over-estimated.”

While I’m sure there are probably many more, he had patents I highlighted last year, Patent No. 135245A: Improvement in Brewing Beer and Ale from 1873, and Patent No. 141072A: Manufacture of Beer and Yeast, in the same year. 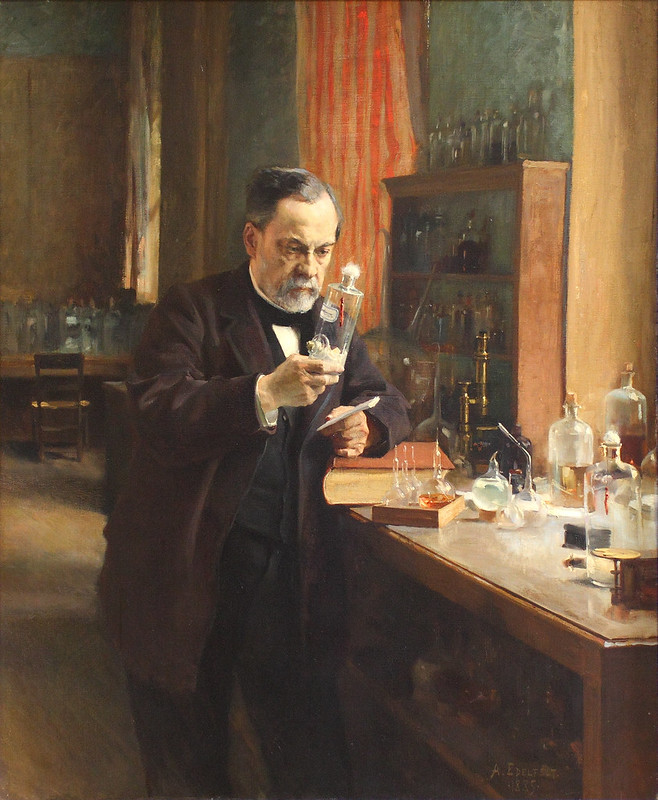 A portrait of Louis Pasteur painted by Swedish-speaking Finnish artist Albert Edelfelt, in 1886.

Fermentation and germ theory of diseases

Pasteur demonstrated that fermentation is caused by the growth of micro-organisms, and the emergent growth of bacteria in nutrient broths is due not to spontaneous generation, but rather to biogenesis (Omne vivum ex vivo “all life from life”). He was motivated to investigate the matter while working at Lille. In 1856 a local wine manufacturer, M. Bigot, the father of his student, sought for his advice on the problems of making beetroot alcohol and souring after long storage. In 1857 he developed his ideas stating that: “I intend to establish that, just as there is an alcoholic ferment, the yeast of beer, which is found everywhere that sugar is decomposed into alcohol and carbonic acid, so also there is a particular ferment, a lactic yeast, always present when sugar becomes lactic acid.” According to his son-in-law, Pasteur presented his experiment on sour milk titled “Latate Fermentation” in August 1857 before the Société des Sciences de Lille. (But according to a memoire subsequently published, it was dated November 30, 1857). It was published in full form in 1858. He demonstrated that yeast was responsible for fermentation to produce alcohol from sugar, and that air (oxygen) was not required. He also demonstrated that fermentation could also produce lactic acid (due to bacterial contamination), which makes wines sour. This is regarded as the foundation of Pasteur’s fermentation experiment and disprove of spontaneous generation of life. 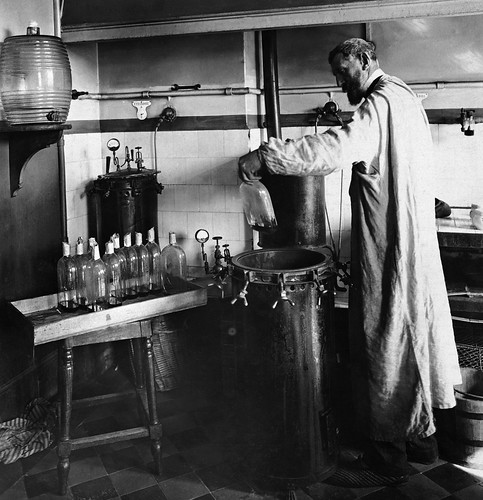 Pasteur’s research also showed that the growth of micro-organisms was responsible for spoiling beverages, such as beer, wine and milk. With this established, he invented a process in which liquids such as milk were heated to a temperature between 60 and 100 °C. This killed most bacteria and moulds already present within them. Pasteur and Claude Bernard completed the first test on April 20, 1862. Pasteur patented the process, to fight the “diseases” of wine, in 1865. The method became known as pasteurization, and was soon applied to beer and milk.

Beverage contamination led Pasteur to the idea that micro-organisms infecting animals and humans cause disease. He proposed preventing the entry of micro-organisms into the human body, leading Joseph Lister to develop antiseptic methods in surgery. Lister’s work in turn inspired Joseph Lawrence to develop his own alcohol-based antiseptic, which he named in tribute Listerine. 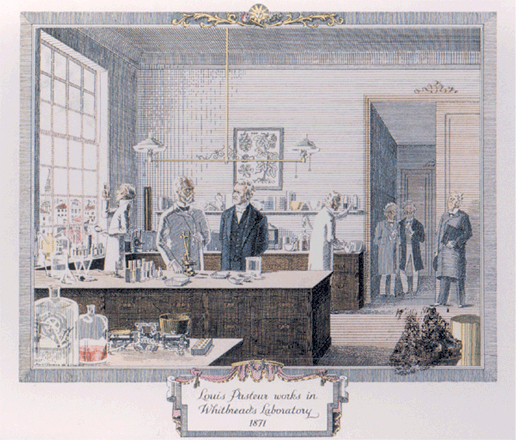 This is an ad is for Whitbread, from 1937, showing an illustration of Louis Pasteur working on his fermentation studies in a laboratory at Whitbread Brewing in 1871, nine years after he completed his first test of pasteurization, which took place April 20, 1862.

On his Wikipedia page, under the heading “Controversies, there’s this paragraph about his research into fermentation:

When Pasteur published his theory and experiments on fermentation in 1858, it was not new to science, neither the idea nor the experiment. In 1840 a German chemist Justus von Liebig had noted that yeast could induce fermentation in water. However, he did not know that yeasts were organisms. In 1856 another German, Friedrich Wilhelm Lüdersdorff, reported that yeasts were microorganisms that convert sugar into alcohol. In 1855, Antoine Béchamp, Professor of Chemistry at the University of Montpellier, showed that sugar was converted to sucrose and fructose in a closed bottle containing water and when he added calcium or zinc chloride to it, no reaction occurred. He also noticed moulds developing in the solution, but could not fathom the significance of it. He concluded that water was the factor for fermentation. He changed his conclusion in 1858 that water was not the main factor, in fact, fermentation was directly related to the growth of moulds, and moulds required air for growth. He regarded himself as the first to show the role of microorganisms in fermentation. Pasteur started his experiments only in 1857 and published his findings in 1858 (April issue of Comptes Rendus Chimie, Béchamp’s paper appeared in January issue), which, as Béchamp noted, did not bring any novel idea or experiments that earlier works had not shown. On the other hand, Béchamp was probably aware of Pasteur’s 1857 preliminary works. With both scientists claiming priority on the discovery, a bitter and protracted dispute lasted throughout their lives. Their rivalry extended to ideas on microbiology, pathogenesis, and germ theory. Particularly on the spontaneous generation because Pasteur in his 1858 paper explicitly stated that the lactic acid bacteria (he named them “lactic yeasts”), which caused wine souring, “takes birth spontaneously, as easily as beer yeast every time that the conditions are favourable.” This statement directly implied that Pasteur did believe in spontaneous generation. He condemned the ideas of Pasteur as “‘the greatest scientific silliness of the age”. However, Béchamp was on the losing side, as the BMJ obituary remarked: His name was associated with bygone controversies as to priority which it would be unprofitable to recall. Pasteur and Béchamp believed that fermentation was exclusively cellular activity, that is, it was only due to living cells. But later extraction of enzymes such as invertase by Marcellin Berthelot in 1860 showed that it was simply an enzymatic reaction.

Pasteur’s ground-breaking “Studies on Fermentation” is in the public domain, of course, so you can read the entire work, or just browse through it, at the Internet Archive. 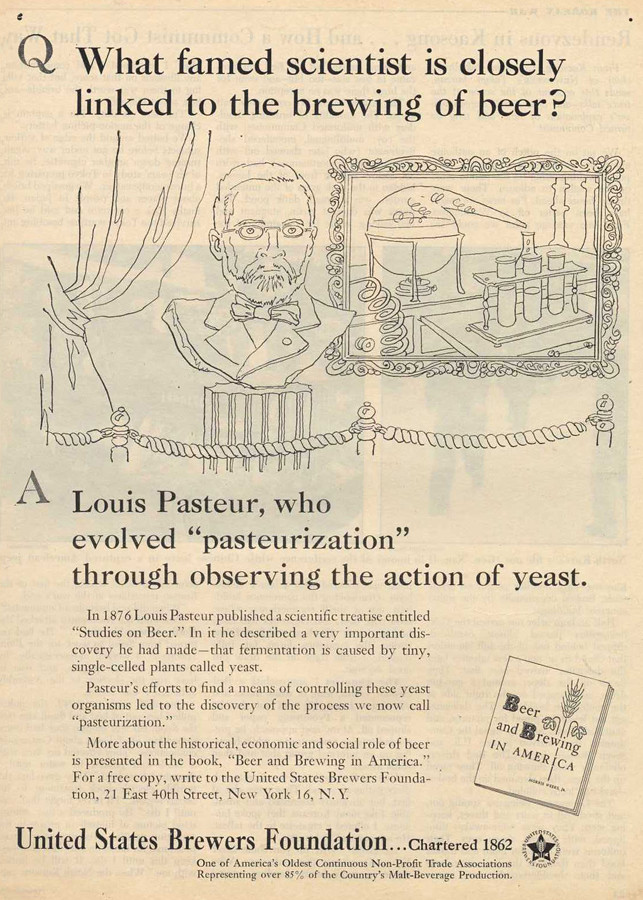 In 1951, the United States Brewers Foundation featured Louis Pasteur in an ad, which was part of a series that used a Q&A format aimed at highlighting different positive aspects of beer and the brewing industry.