While records going back this far in time are notoriously unreliable, some sources put the birthday of St. Arnulf of Metz at August 13, 583 C.E., such as Find-a-Grave, among others. He’s also known as Anou, Arnould, Arnold of Metz, and his feast day is July 18. Although even the year is not settled, and some sources give it as 580 or 582 C.E., so the actual likelihood that any of this is correct is pretty low. 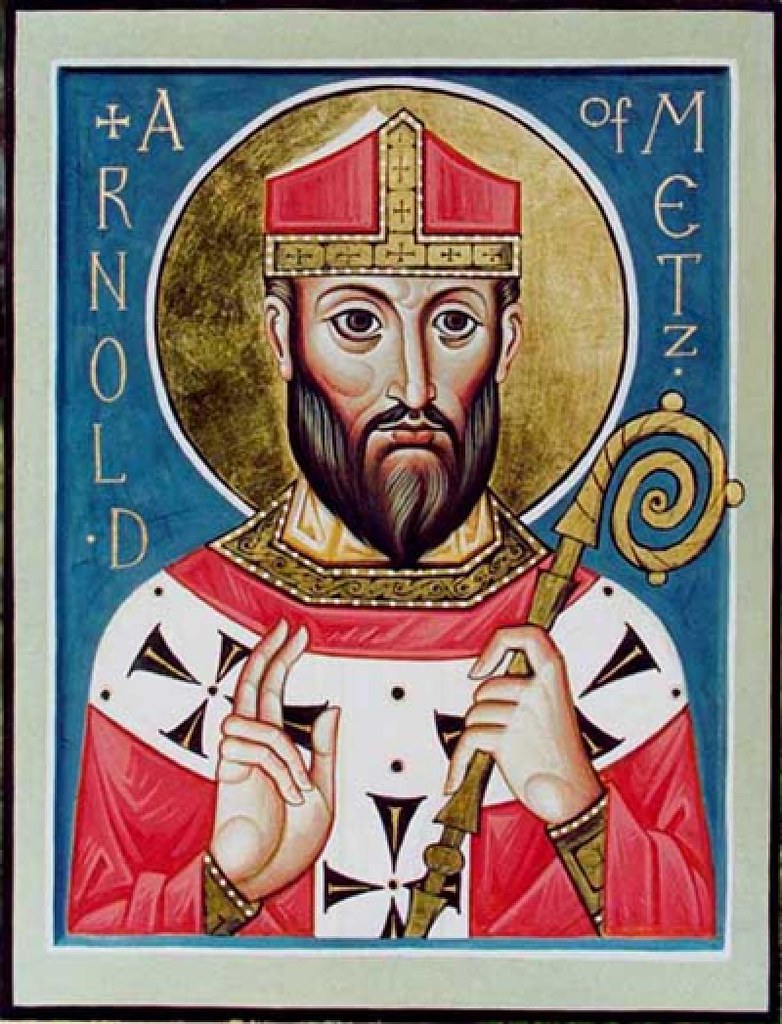 Also, Arnulf is one of at least three patron saints of brewers with similar names, although he is the oldest, and essentially first one. That’s one of the reasons I chose his feast day, July 18, for the holiday I created in 2008, International Brewers Day.

The Saint Arnold most people are familiar with is Arnold of Soissons, and he’s from much later, almost 500 years, and is thought to have been born around 1040 C.E. Less is known about the third, St. Arnou of Oudenaarde (or Arnouldus), and he’s also a patron saint of beer and specifically Belgian brewers, because Oudenaarde is in Flanders. His story takes place in the 11th century. 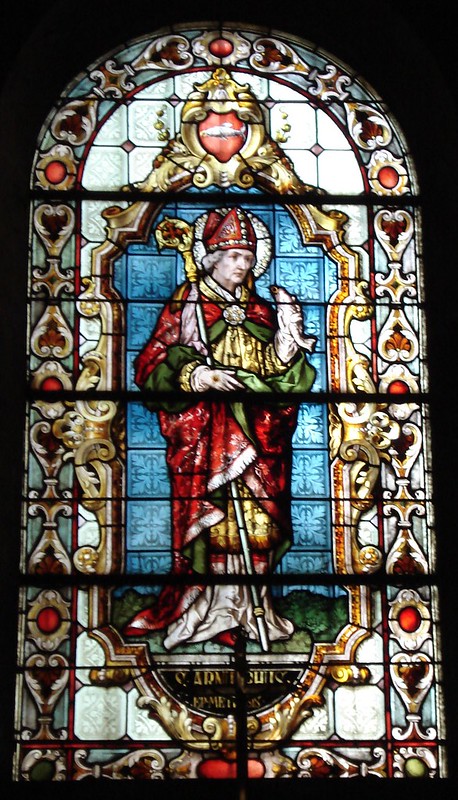 Here’s his bio from Find-a-Grave:

Saint Arnulf of Metz (c 582 — 640) was a Frankish bishop of Metz and advisor to the Merovingian court of Austrasia, who retired to the Abbey of Remiremont.

Saint Arnulf of Metz was born of an important Frankish family at an uncertain date around 582. In his younger years he was called to the Merovingian court to serve king Theudebert II (595-612) of Austrasia and as dux at the Schelde. Later he became bishop of Metz. During his life he was attracted to religious life and he retired as a monk. After his death he was canonized as a saint. In the French language he is also known as Arnoul or Arnoulf. Arnulf was married ca 596 to a woman who later sources give the name of Dode or Doda, (whose great grandmother was Saint Dode of Reims), and had children. Chlodulf of Metz was his oldest son, but more important is his second son Ansegisen, who married Saint Begga daughter of Pepin I of Landen.

Arnulf was canonized as a saint by the Roman Catholic Church. In iconography, he is portrayed with a rake in his hand.

He was the third great grandfather of Charlemagne.

St. Arnulf in the Metz Cathedral.

The Legend of the Beer Mug

It was July 642 and very hot when the parishioners of Metz went to Remiremont to recover the remains of their former bishop. They had little to drink and the terrain was inhospitable. At the point when the exhausted procession was about to leave Champigneulles, one of the parishioners, Duc Notto, prayed “By his powerful intercession the Blessed Arnold will bring us what we lack.” Immediately the small remnant of beer at the bottom of a pot multiplied in such amounts that the pilgrims’ thirst was quenched and they had enough to enjoy the next evening when they arrived in Metz. 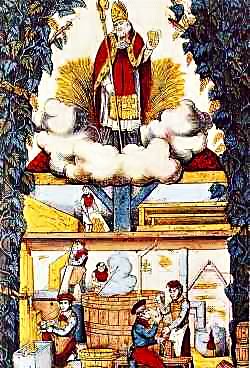 And here’s another account from Nobility and Analogous Traditional Elites:

During an outbreak of the plague a monk named Arnold, who had established a monastery in Oudenburg, persuaded people to drink beer in place of water and when they did, the plague disappeared.

Arnold spent his holy life warning people about the dangers of drinking water. Beer was safe, and “from man’s sweat and God’s love, beer came into the world,” he would say.

The small country of Belgium calls itself the ‘Beer Paradise’ with over 300 different styles of beer to choose from. Belgium boasts of centuries old tradition in the art of brewing. In the early Middle Ages monasteries were numerous in that part of Europe, being the centers of culture, pilgrimage and brewing. Belgium still has a lot of monasteries and five of these are Trappist, a strict offshoot of the Cis­tercian order, which still brews beer inside the monastery.

During one outbreak of the plague St. Arnold, who had established a monastery in Oudenburg, convinced people to drink beer instead of the water and the plague disappeared as a result. Saint Arnold (also known as St. Arnoldus), is recognized by the Catholic Church as the Patron Saint of Brewers.

St. Arnold was born to a prominent Austrian family in 580 in the Chateau of Lay-Saint-Christophe in the old French diocese of Toul, north of Nancy. He married Doda with whom he had many sons, two of whom were to become famous: Clodulphe, later called Saint Cloud, and Ansegis who married Begga, daughter of Pépin de Landen. Ansegis and Begga are the great-great-grandparents of Charlemagne, and as such, St. Arnold is the oldest known ancestor of the Carolin­gian dynasty.

St. Arnold was acclaimed bishop of Metz, France, in 612 and spent his holy life warning people about the dangers of drinking water. Beer was safe, and “from man’s sweat and God’s love, beer came into the world,” he would say. The people revered St. Arnold. In 627, St. Arnold retired to a monastery near Remiremont, France, where he died on August 16, 640.

In 641, the citizens of Metz requested that Saint Arnold’s body be exhumed and ceremoniously carried to Metz for reburial in their Church of the Holy Apostles. During this voyage a miracle happened in the town of Champignuelles. The tired porters and followers stopped for a rest and walked into a tavern for a drink of their favorite beverage. Regretfully, there was only one mug of beer to be shared, but that mug never ran dry and all of the thirsty pilgrims were satisfied. 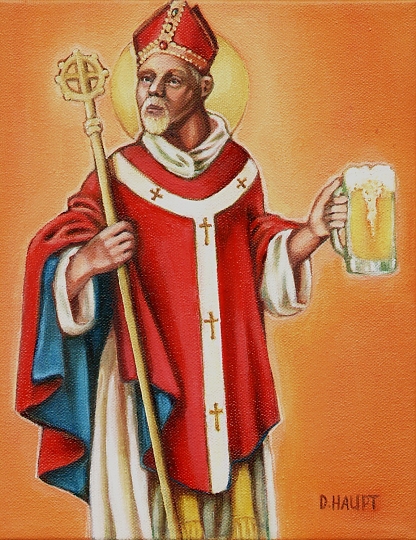