You are here: Home / Beers / History in a Glass

This is the kind of story that exemplifies the best in craft brewing, at least in my opinion. There used to be a brewery in Manitowoc County, in the small town of Two Rivers, Wisconsin (pop. <11,261) by the name of Two Rivers Beverage Co. It’s earlier names were Mueller Bros. Brewing Co. and City Brewery prior to Prohibition. But afterward, it was known by Two Rivers and lasted until about 1966. One of their most popular beers was apparently White Cap beer, which they made from 1939 until 1963.

Carl and Chris Liebich, the children of Harold Liebich, the former co-owner of Two Rivers, asked John Jagemann, owner of the Courthouse Pub, a brewpub in nearby Manitowoc, if he would be willing to brew up a batch of White Cap for a family and brewery reunion they’d planned on hosting. The brewpub said they’d need the recipe, of course, and Harold’s brother George, with whom Harold ran the brewery from 1952 until it closed, found it in the attic of his California home. Parts of the recipe dated from 1915 and were written in German, but it was complete. The Courthouse Pub’s head brewer in Canada, John Downing, put together a version of it that would work in the brewpub’s system and Brent Boeldt, brewmaster at the Wisconsin location, brewed it up for the reunion, which took place Sunday. Today the brewpub will release White Cap for public consumption. Jagemann describes the beer as a lighter style beer and told the local paper that “[i]f it sells well, it can become one of our standard beers.” Now that’s a fun little story. There was a great little article detailing all of this in today’s Manitowoc Herald Times Reporter. 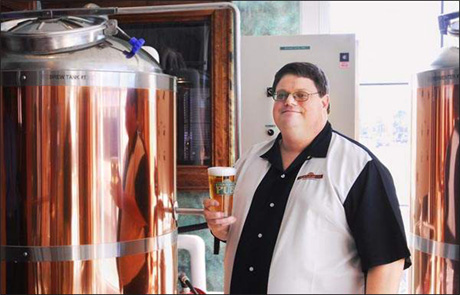