You are here: Home / Beers / The International Organisation of Good Templars

Just when I think prohibitionists can’t possibly get any scarier, I found out something new to give me the willies. I saw a odd set of letters retweeted by the good nut jobs at Alcohol Justice yesterday; the letters in question were the IOGT. I figured if they were in bed with AJ they would be worth knowing about. I’m not sure how I missed this group. They’re not exactly a secret, despite having all the trapping of a secret society. The IOGT was originally the “International Order of Good Templars,” a temperance organization founded in the 1850s. They eventually changed their name to the International Organisation of Good Templars in the 1970s because they felt Organisation sounded less like a scary secret society than Order. They also dropped the secret rituals and, I assume, got rid of the secret handshake. It didn’t help, and that’s probably why today they just use the initials IOGT. 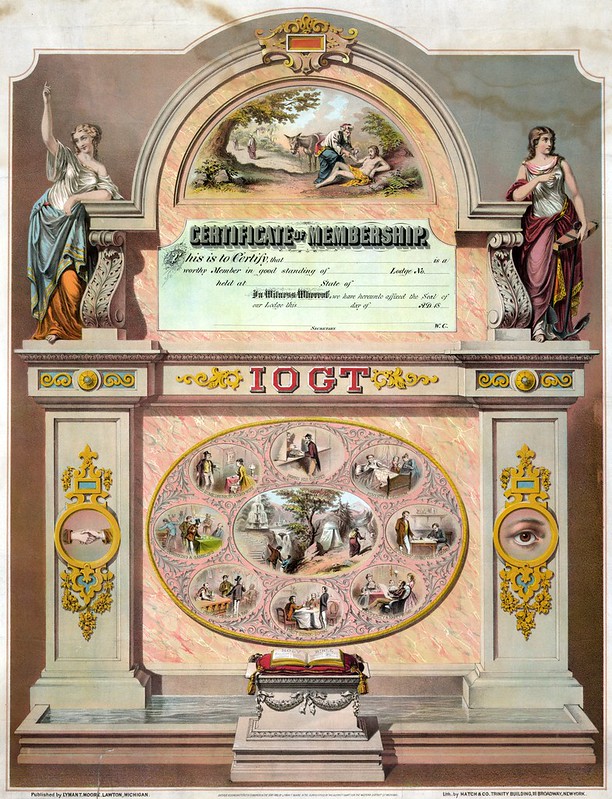 An 1868 membership certificate from a chapter in Michigan. Looks harmless enough.

Apparently, it’s “structure [was] modeled on Freemasonry, using similar ritual and regalia. Unlike many, however, it admitted men and women equally, and also made no distinction by race.” Except in the American South, of course, where folks naturally demanded there be separate lodges for black and white members. So you know they were good people. Nothing furthers a stated goal of “liberation of peoples of the world leading to a richer, freer and more rewarding life” by “promot[ing] a lifestyle free of alcohol and other drugs” like continuing racism after the abolishment of slavery.

In 1875, after the American Civil War, the American senior body voted to allow separate lodges and Grand Lodges for white and black members, to accommodate the practice of segregation in southern US states. In 1876, Malins and other British members failed in achieving an amendment to stop this, and left to establish a separate international body. In 1887 this and the American body were reconciled into a single IOGT.

Throughout the late 19th century, chapters were formed all over the world and today they’re headquartered in Sweden, where it’s known as the IOGT-NTO, and other hyphenated suffixes are used in the forty nations with a chapter. 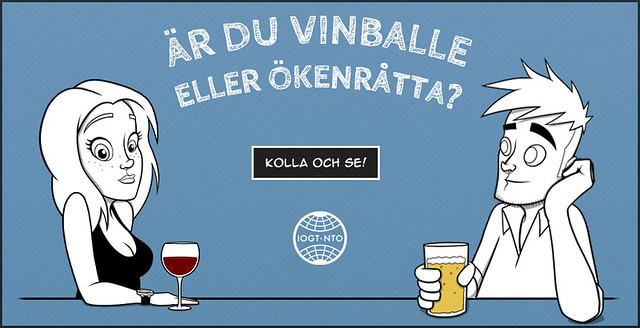 Apparently they’re fine with perpetuating stereotypes of wine for women, beer for men.

Here in America, it’s IOGT-USA, where there are 21 local chapters in only five states. On the plus side, “women were admitted as regular members early in the history of the Good Templars. In 1979, there were 700,000 members internationally, though only 2,000 in the country of the IOGTs origin, the United States.” I didn’t see any more recent membership figures, so who knows how many Good Templars there are now in the 21st century.

Down a little farther on the petition page, they claim that the “alcohol industry still rule people and markets without being watched, examined or globally questioned by media or lawmakers.” Um, Alcohol Justice is doing just that; styling themselves as the “industry watchdog.” And they’re hardly alone. Countless organizations are keeping a careful watch on the alcohol industry. It’s one of the most tightly regulated industries in the U.S., and I suspect that’s true in most other places, too.

I get that you don’t like alcohol, and think everybody should just stop drinking it, but let’s not pretend this idea just occurred to you last week. Or that brewers are part of some secret cabal to ruin your world. Because really, it’s not “your” world, it’s “ours,” by which I mean “everybody’s.” And many of us like a nice beer, thank you very much. You don’t want to drink alcohol? Fine, don’t drink it. No one is telling you that you must, I only wish you’d extend us the same courtesy and stop telling us about every problem drinker, as if we’re all the same. There are troubled people everywhere, doing all sorts of bad things, many of them worse than drinking too much. Like virtually every aspect of human existence, there is good and bad, and everyone should have the right to choose their own path. For every anecdote about an alcoholic, there are 99, or 95, people who aren’t; good people who are drinking responsibly, holding down jobs, raising families and getting on with their lives. They don’t deserve to have you condemning them every chance you get.

Examples of non-alcoholic fun. I have fun without alcohol all the time, but only in moderation.