You are here: Home / Beers / Kenya’s Kill Me Quick Moonshine

An alert Bulletin reader (thanks Jason) sent me a link to a story in the Economist with similarities to an earlier post I did, Poisoning People During Prohibition: A Disturbing Parable, in which the African nation of Kenya is battling the problem of illegal moonshine occasionally made with jet fuel or embalming fluid. Kill me quick, Kenya’s lethal brew deserves its name is an interesting read. A native moonshine concoction known as chang’aa is causing problems for both the government and a good portion of the nation’s youth. Chang’aa is a fermented drink brewed with corn (maize) and sorghum.

The problem is, unscrupulous moonshiners are speeding up the fermentation by adding stolen dangers like rocket fuel … well, jet fuel, antifreeze and embalming fluid. Those things, it goes without saying, are not something you should drink, even diluted. According to the article, “10ml of methanol can burn the optic nerve; 30ml can kill.” Also, police raids have turned up other unsavory things in the moonshine: decomposing rats, excrement and women’s underwear. As the Economist points out, the word chang’aa means literally “kill me quick” and is well chosen. For the equivalent of one U.S. dollar, you can buy four glasses, and the adulterated chang’aa has killed more than a few and blinded still others.

The reason people drink it is because most people in Kenya live in grinding poverty and can’t afford legitimate alcoholic drinks like beer. Beer there is so heavily taxed that only the rich can afford it. Surprisingly, no one but the breweries are suggesting that perhaps the taxes could be lower so poor people don’t have to risk death to drink alcohol. East African Breweries, “one of Kenya’s biggest companies and taxpayers,” unsurprisingly “wants to see illicit chang’aa replaced with a safer commercial version.” That would undoubtedly involve lowering alcohol taxes and despite the fact that it might actually save lives the government is concerned that “bringing the price of alcohol down to that of water risks increasing alcoholism and forcing the very poorest into even dodgier booze dens. In any case, it could add other costs: crime, violence to women and children, unsafe sex and bad health.” None of those are good, but are they worse then death? It’s the old alcohol as entirely evil argument writ large. 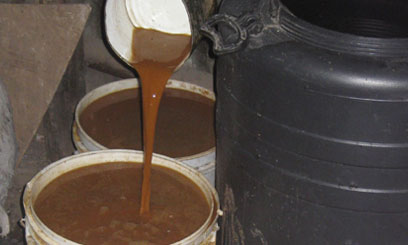 This is an interesting case to me because it’s taking the idea of how taxes affect consumption to a whole new level. Neo-Prohibitionists in the U.S. have long argued that higher taxes will decrease consumption and especially access by young people. It’s been their stated rationale for many attempts at pushing higher excise taxes on alcohol. But there’s obviously a threshold where that starts to backfire. In Prohibition, for example, removing it completely (in effect, the same as making it too expensive) didn’t stop people from drinking, it simply drove it underground. And in this real world example, Kenya’s taxes are obviously too high such that it’s driven people to drink illegal — but affordable — alcohol. Ours haven’t reached that point yet, despite the best efforts of the anti-alcohol wingnuts. As one commenter succinctly put it:

When a given chunk of economic activity contains a fair mix of illegal and legal business, controlling the illegal part by increasing the regulations of the legal part is illogical and ineffective. On the other hand, if the great majority of the market can eventually be brought into the legal realm, then there is room for regulations to reduce whatever damage it might cause. The legal recreational drugs in most of the world, alcohol and tobacco, are regulated and taxed to the point where if the prices were much higher, an illegal market would likely develop. For example, when cigarettes in Canada were taxed to a price of roughly 2X that in the US, some serious smuggling began. Thus, when Kenya should do is first enable unadulterated legal alcoholic drinks to be sold at a price that’s competitive with the rotgut the drunks are now stuck with. Even habitual drunks will pay a small premium for safety and known potency.

In fact, the UN estimated that half of Kenya’s alcohol trade is for the illegal moonshine, suggesting that the taxes for the legal drinks is way too high. But apparently it’s harder to give up the tax revenue than create a safer world for Kenya. Instead, crackdowns are the order of the day, as Kenya to Sustain War Against Brews. In typical jack boot fashion, ignoring any root causes, “Internal Security Minister Professor George Saitoti says the government will not relent on its war against the production and consumption of illicit brew in the country.” Yeah, that’s going to fix the problem. Unfortunately, it’s a typical response. It’s easier to beat people with a cudgel than understand their problems and try to fix the underlying causes. Obviously, people don’t actually want the risk of death associated with their choice of drink, but the fact that so many are willing to take such risks is indicative of a deep-seeded problem. It seems to me that the accepted propaganda that all alcohol is evil causes such bad decisions because governments seem more worried about not going against the propaganda than they are about finding actual solutions.

While not easy by any stretch of the imagination, the best solution to Kenya’s problems is to improve the life of its poorest citizens. That would do more to quell the moonshine than virtually anything else they might try, and it would certainly be better than using police powers and violence. The strong arm approach never works in the long run. But I suppose as long as the U.S. is the model, that’s what other nations will try, too. Our enforcement of Prohibition was pitifully ineffective and caused more deaths than people it saved, I’d warrant — including purposely poisoning people in the name of enforcement — and our current “war on drugs” is similarly having the same useless effect, making the problems associated with drug use actually worse and guaranteeing the criminal element, and the violence that brings with it, too. Until we realize that such methods will never work, other nations will continue to look to us for guidance will and fail as miserably as we have. More’s the pity.