You are here: Home / Beers / New Albion Beer Coming Back

Here’s some terrific news that I can finally talk about. I was there when discussions began during last year’s Great American Beer Festival. At the annual Samuel Adams media brunch — where the Longshot winners are announced — Jim Koch started talking with Jack McAuliffe, founder of the New Albion Brewery in 1977, America’s first modern microbrewery. A idea was hatched, and I was sworn to secrecy. But thanks to my friend John Holl, the cat is out of the bag. He’s got the full story at All About Beer, entitled The Return of New Albion: America’s First Craft Brewery Gets a Revival.

After talking and negotiating since last year, on July 3, Jack McAuliffe and Jim Koch mashed in the first New Albion beer Jack has made in many years. They’re making his pale ale, or at least as best Jack can recall it.

First, he had to hash out details with Koch and brewer Dean Gianocostas. The memories came mostly easy to McAuliffe who recalled temperatures, ingredients, and processes. While the brewers had sketched out a plan in advanced, but much was changed.
“We should do it Jack’s way,” said Koch with wide eyes as he listened to McAuliffe recall the recipe.

What they settled on was New Albion Ale, a pale ale “as faithfully” as McAuliffe could recall. Malt variations that replaced strains used in the 1970s were substituted, for example. 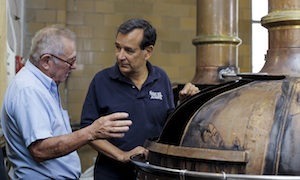 Jack McAuliffe and Jim Koch at the Boston brewery in Jamaica Plain.

The beer itself will debut at this year’s GABF. “Then, additional batches of New Albion Ale will be brewed at” one of the Sam Adams breweries and “distributed nationwide in 12-ounce 6-packs starting in January 2013. This is designed to be a one-shot deal so when it’s gone, it’s gone.” That will definitely be one to pick up. 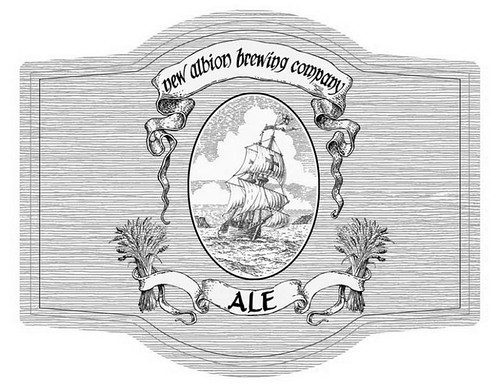 It appears the new label will be very similar to the original.