You are here: Home / Beers / New Belgium Frambozen Brown is Back

New Belgium Brewing‘s tasty Frambozen Raspberry Brown Ale has been released for the holidays again this year, and will be available in select markets until the end of the year. At previous Celebrator tastings, we’ve given it high marks. Last year we described as:

I always felt the brown ale sweetened slightly with fruit works very well. It’s a nice twist on Belgian lambics, a mix of the idea of those beers with the caramel, often nutty, flavors of a brown ale. I’m looking forward to seeing these samples in the mailbox.

And how about this great quote they included in the sale sheet, from Stephen Beaumont, writing in Esquire.

“More and more American men are downing big, bold, ungirly fruit beers. Typical is the seasonal Frambozen from new belgium Brewing Company, a raspberry brown ale made for Colorado winters, with a massive taste and a face-slapping 6.3% (this year it’s 7%) alcohol.”

Experiencing Frambozen begins with the aroma of fresh red raspberries, followed by the ripe seductiveness of a fruity brown ale with depth and delicate notes. Frambozen, New Belgium’s traditional winter seasonal, is inspired by the Framboise beers of Belgium, where the use of raspberries as a beer adjunct outdates the universal acceptance of hops.

Frambozen is deep ruby in color, with flavors just as rich. With the fruit as the integral ingredient, its name is derived from the Flemish word for raspberries. Every year, New Belgium sends delegates to Salem, Oregon to oversee the process of turning freshly picked berries from northern Washington into a pure juice that is loaded into oxygen-free CO2 tanker trucks that make the journey back to Colorado. The end result is a delicious, complex beer that is delivered on time to complement holiday meals.

“We have made a conscious decision to process the raspberries into a single strength, straight juice with nothing added,” said Bill Hepp, a brewer with New Belgium who takes the journey to Oregon annually. “As a pure juice, it is a whole food, with no taste or aroma lost in the concentration stage, which ultimately makes the beer that much better.”

Frambozen is available in certain New Belgium markets now through the beginning of the New Year. 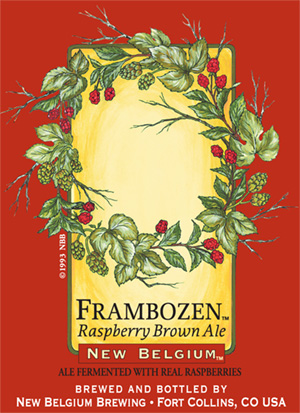