You are here: Home / Beers / Pandering To Women

I may not be a woman, but I grew up around them quite a lot as a child, perhaps more than some others (my folks divorced when I was one and I spent most of my formative years among my mother, grandmothers, aunts, etc.) and am fully in touch with my feminine side. Plus, I love quite a few women — one a lot more than others — but count quite a few among my closest friends. So I cringe every time I read about the efforts of big companies to market beer directly to women, believing all it will take to increase market share is more attractive packaging or sweeter flavors. How many of these failed efforts have we endured in just the last decade?

A few days ago, yet another one surfaced, in a Fast Company interview with Carlsberg Group CEO Jorgen Buhl Rasmussen entitled Carlsberg Taps The Next Big Beer Market (Really): Women. This morning, I saw quite a few exasperated tweets and posts from women in the beer industry that I respect, and decided to read the interview. It’s a head-shaker, alright. Riddled with so much wrong, it’s hard to address it all, so I won’t. I’m sure someone will dissect it better than I can.

But, just a few points. First, Rasmussen claims that the “beer category has been suffering in terms of image,” but for just “the last 10 to 15 years.” Um, I can’t actually remember a time when beer wasn’t marketed almost exclusively to men. There are a few post-World War 2 ads that reach out to women — primarily because they were the ones doing the grocery shopping — but by the 1960s it was all men, all the time. And it’s been that way ever since, from the Swedish Bikini Team to Miller’s infamous mud wrestling. But he soldiers on.

Rasmussen and others still think product innovation and marketing brewed drinks toward women is possible. Increasingly, women know about different, palate-friendly beers like Abbey Ales, fruit lambics, ciders, ginger beers, and dark stouts — as well as about the more varied glassware they require and how to pair them with foods. Women want “a less bitter, non-bloating beer that does not give you a malty/hoppy aftertaste and breath,” says Carlsberg spokesman Ben Morton. “Flavor proliferation has become a key feature of beer innovation.”

So what’s the plan? “[H]e wants to come up with new types of drink recipes that can be made in Carlsberg-owned breweries but are lighter in alcohol, refreshing in taste, and perceived as healthy enough to take on wine, champagne, and other drinks vying for women’s dollars.” Rasmussen used to work for Duracell, Gillette Group, Mars, and Unilever, and seems to believe that beer is just the same as marketing razors and candy, but I don’t think that’s true.

Then there’s this bit of wisdom, by Carlsberg’s VP of Marketing, Kirsten Ægidius. “Many young people aren’t keen on the bitter aftertaste of beer.” Uh, huh. That’s why IPA has been the fastest growing category for years.

So I know they can’t help themselves, but I really wish the big beer companies would just stop this insane, asinine belief that reaching women is a matter of finding beer that’s female friendly and is marketed to them like Virginia Slims’ “you’ve come a long way, baby” pandering.

Not surprisingly, I have a lot of female friends who love beer every bit as much as I do. My wife is a beer lover, and probably drinks more beer at home than I do. I know countless female brewers, beer writers and female fans who love craft beer. This is the same craft beer, mind you, that I love, and that every other beer-loving male loves, too. There doesn’t need to be gender-specific beer. That’s a ridiculous notion, but one that keeps resurfacing, even though it fails every single time. I remember an “I Love Toy Trains” video that Porter used to watch when he was younger that showed how in the 1950s Lionel created a toy train set aimed at girls in which all the cars were pastel colors, pink, lavender, etc. It bombed, because the girls who wanted to play with toy trains wanted the same trains that the boys had. It’s hard to imagine why anybody would have thought otherwise. 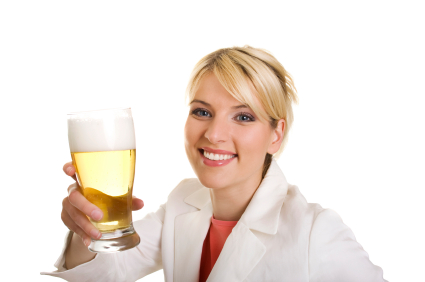 So while I hate to speak for women beer lovers, who are quite capable of fending for themselves, I’m just as eager for this nonsense to stop. So here’s a few tips I have for the big beer companies on how to reach women: